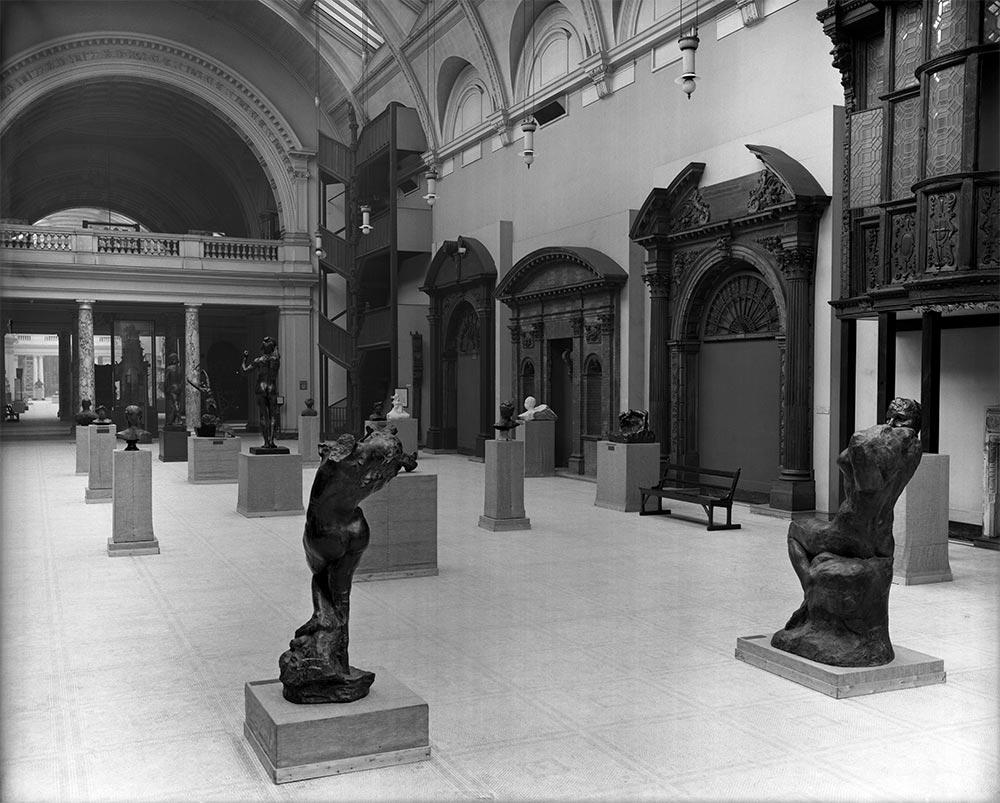 Display and decisions at the V&A as the war unfolds

The war had been intensifying. Dramatic and rapid progress meant that German forces were only thirty miles from Paris, the fall of which was expected imminently. From August to October 1914, French losses were at least 230,000, greater than during any other period of three months during the war. Alongside a relatively small professional defence force, the British soldiers were at this stage volunteers (conscription did not come into effect until 1916). Perhaps this added to Rodin’s admiration for their service. Moreover, during negotiations over his sculptures he was made aware of the more immediate impact of the conflict. On 28th September 1914 Maclagan wrote to Rodin (in characteristically fluent and beautifully written French) that it was harder than usual to arrange for objects to be moved because the majority of workmen at the Museum had gone to serve in the war. The V&A Archive includes information about members of staff who died in the conflict. In the first three intense months these included James Fergusson, Warder-cleaner, d. 14th Sept 1914 at the Battle of the Marne; Thomas Stratford, Repairer, Art Workroom, d. 22nd Sept 1914 when HMS Hogue was torpedoed; and Herbert Wyer, Warder-cleaner, d. 2nd Nov 1914 at Ypres. In early November, Lionel Earle, a senior Civil Servant supportive of Rodin during the Burghers and V&A negotiations, wrote to the sculptor of horrific injuries to both legs and an eye suffered by Earle’s brother at the front line. Rodin wrote back, deeply affected by this. Other writings show how deeply Rodin felt about the wider destruction and devastation of war both on individuals and the built heritage.

Back at the V&A itself, Maclagan wrote to Rodin that the sculptures were installed and he was keen to have Rodin’s opinion of the display. The works were juxtaposed with an imposing sculpted Buddha in the background which appealed to Rodin. Smith had to justify his decision to accept the loan to the Government Board of Education on which the V&A depended. He wrote on 2nd October to its Secretary, ‘Personally I may say that I detest [‘most of’ inserted by hand] Rodin’s work… but there is no doubt, as Mr Maclagan says, that when the history of modern art comes to be written, Rodin’s sculpture will bulk large as an important factor’. He also argued that ‘it seemed to be a time for indulging in international amenities of this kind’. An official at the Board noted that offering ‘ware-house room in our cellars’ would not be problematic, but that exhibiting works by a ‘living foreign artist’ could be ‘an awkward precedent’. However, it was felt this could be justified in the ‘wholly exceptional’ circumstances and also that the public ‘who do not know or care about the proper scope of this museum’ would certainly be pleased that it was going ahead.

Rodin was absolutely delighted with the arrangement of the sculptures and was prompted to consider a more permanent display. Maclagan very enthusiastically referred to the ‘magnificent gift’ in a letter to Rodin dated 28th October and two days letter Smith wrote to Rodin that the display had attracted enormous interest and admiration and then enthused about the possible prospect of the ‘sculptures superbes’ finding a permanent home in the V&A. Rodin replied to Smith on 5 November (wrongly dated 5 October), confirming the gift of the whole group: ‘C’est ainsi que j’ai pensé offrir à l’Angleterre qui m’a toujours été favorable et Bienveillante – les oeuvres en totalité’. He added that its acceptance ‘me rempli de joie’, and signed the Declaration of Gift on 8th November 1914. The unique significance of the group, as having been selected by the sculptor himself to represent his work, was acknowledged at the time.

On 11th November, Smith explained to the Secretary of the Board the background to Rodin’s momentous decision. ‘M. Rodin told me yesterday that it had been his intention to bequeath this collection, which he has been all his life forming, to the French Government’ (Rodin’s intention to give his entire collection to France had indeed been publicly announced in Britain before the outbreak of war, in The Times, 18th February 1914). ‘He has, however, been so much moved by the joint action of French and English troops in France that he has decided to offer it to us’. So because of the totally unforeseen circumstances of the works being stranded in London, Rodin’s gift to England preceded by two years the finalisation of his (albeit much larger) gift to France.