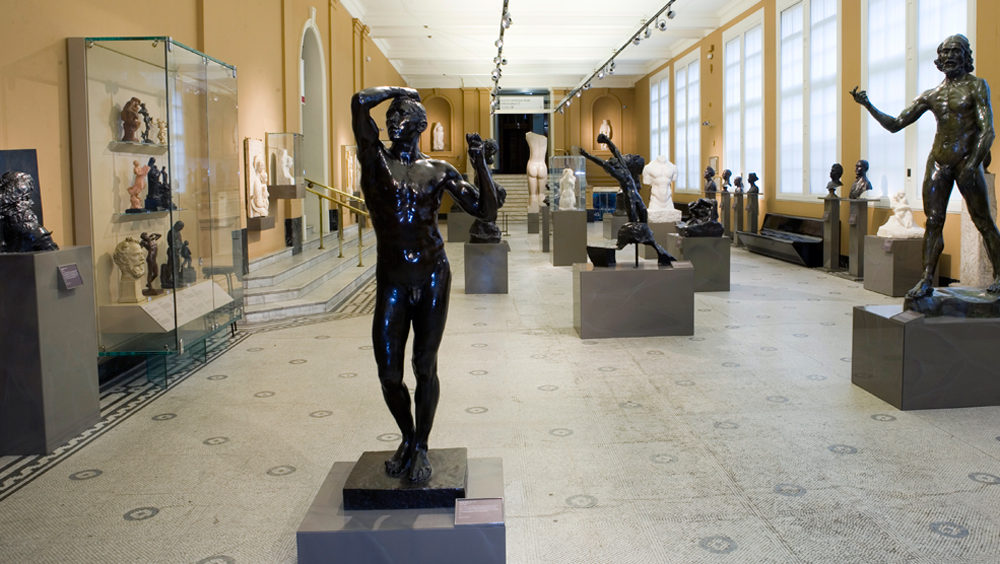 8 November 2014 marks the anniversary of French sculptor Auguste Rodin’s gift to the V&A  of eighteen of his sculptures in honour of the French and British soldiers fighting in the First World War. In the weeks running up to this important anniversary, we have been charting the story behind this remarkable gift.

Rodin’s death on 17th November 1917 was marked by an outpouring of praise in the British media. His funeral was attended by official international representatives including Sir Cecil Smith. Concurrently, a memorial service was held in St Margaret’s Church, Westminster, organised by Rodin’s old friend John Tweed. This was attended by many of his artistic admirers including Lavery, the sculptors Sir Thomas Brock, Hamo Thornycroft and Albert Toft, and the architect of the then new facade of the V&A, Sir Aston Webb (whose youngest son had been killed in action on 25th September 1916, aged 30).

A major memorial exhibition of Rodin’s work was organised at the V&A in December 1917, with loans supplementing the works gifted to the Museum three years earlier. It was reviewed by a French journalist, Charles Delchevalerie, in Les Nouvelles (21st December). Having discussed several other works in detail, he particularly singled out for praise the generally less appreciated fragmentary bronzes:

[loosely translated as… : ‘some sculptures of his last style, mutilated pieces of nature such as Cybèle, The Muse, Torso of a Woman, The Crouching Woman and the disproportionate Head of a Woman… Works which are strange at first… deliberately rough and unfinished, when compared to the unrivalled technical perfection of the St John or The Age of Bronze, but what strength, what magnificence remains in these studies which recall excavated antique remains, and which in their elemental structure show an overflow of life, a dynamic of expression and of truth which obsess the visitor when he has left them’].

The views expressed show an early appreciation for Rodin’s more personal and unconventional later work from an aesthetic point of view as well as in terms of their relationship to much earlier sculpture which Rodin admired and collected. Although strongly influenced by Classical and Renaissance precedents, Rodin challenged long-standing notions of sculpture and beauty and paved the way for modernist works of the 20th century. The Rodin gift of 1914 marks the chronological end-point of the V&A’s sculpture collection. This centenary year of its acquisition has been celebrated at the Museum with a symposium and by the re-hanging of the Lavery portrait alongside the sculptures, as in 1914.

Rodin’s magnificent donation of 1914 was made partly in response to the practical difficulties of their having been stranded, but also very much as a direct response to the heroism and comradeship of the allies at a time of intense conflict. The V&A gift was immediately given a weighty significance in its wartime context but also cemented widespread admiration for Rodin and his work. A journalist in the Manchester Guardian (12 November 1914) summarised the feelings of the nation: ‘once looked upon as a dangerous artistic heretic whose work no sane person could sincerely admire, he has now an undisputed position as the greatest sculptor of his time’.

What is the title of the Rodin bronze sculpture on the entrance floor of the Victoria and Albert muse? It is of a male who seems to be arched back and looking up.

Your answer will be appreciated.
Margaret Martin