This allegorical tapestry, woven in late fifteenth-century Germany, measuring 137 x 35 inches (87.6 x 344.8 cm), was the first tapestry purchase by the V&A, bought for £10 in 1836.  It depicts a young woman’s quest for spiritual truth as she rejects earthly for sacred love.  It consists of five scenes, each with a decorative scroll of explicatory script above, written in German. We are taken on a spiritual journey with the protagonist, a well-born maiden, who says her prayers in the first scene, fashionably dressed in a pink overgown and yellow underdress, and wearing pointed shoes.  The decorative scroll allows us to eavesdrop on her inner thoughts, hearing her pray “That Mary’s son may be merciful to me / I confess my sin upon earth”.  Our protagonist humbles herself in front of Christ, admitting and acknowledging her sinful nature as a human on this imperfect earth. 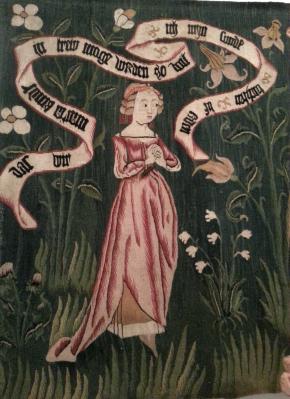 The second scene takes her to confession – one of the sacraments of the Church – and an appropriate wardrobe change.  We see her in a simple but elegant brown gown highlighting her search for forgiveness, kneeling before a priest.  She strips away the luxurious, dress, hoping – as the scroll relates – to “find mercy with God everlastingly”.  In the third scene, we are given a literal rendition of 1 John 1:7, “the blood of Jesus, his Son, purifies us from all sin”.  In a basin set on a wooden table, she washes her heart in the blood of Christ, shed to give everlasting life.  The action of purifying her heart with blood is a reminder that sin must be rooted out from within – confession alone is superficial. The heart was also a potent symbol of love in the Middle Ages, and in this context connotes the woman’s rejection of sexual love for that of Christ. 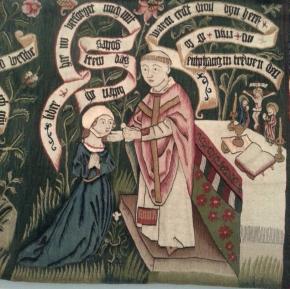 This idea is carried forward in the penultimate scene, where the scroll refers to our protagonist as a “bride of Christ”.  With another wardrobe change, now in a blue dress (a colour associated with the Virgin Mary, symbolising humility and virtue) and with head modestly covered, she kneels to receive the sacrament of the Eucharist – the consecrated wafer, transformed, according to Catholic doctrine, into the body of Christ during the Mass.  Her pose is mirrored by the blue-robed image of the Virgin on the altar: how better to display your reverence?  On the altar, the Crucifix with its flanking statuettes of the Virgin and St John, together with the candlesticks, chalice, paten and open missal (service book) vividly evoke the accoutrements of the Mass. 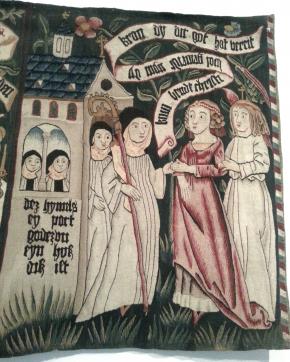 Our protagonist’s spiritual journey culminates in the final scene, as she truly becomes the bride of Christ, entering a nunnery.  Attended by her waiting woman, she is greeted by the abbess, holding a gold crozier, at the door of the convent, while two lay sisters (wearing black scapulars) look through the windows.  “This is a house of God and a gate of Heaven’, the scroll tells us.

Written in German vernacular, the tapestry was probably made for a literate though not necessarily highly educated viewer.  The subject matter suggests that it was woven for (and possibly in) a nunnery.

Medieval nunneries have been viewed as fundamentally aristocratic institutions. The term ‘dumping ground’ for wealthy women has often been used.  A place for wealthy girls to be sent, often banished. A destination for daughters of traitors; three daughters of Hugh Le Despenser the Younger were forced into a nunnery after the execution of their father in 1327.  It could be a home for forgotten royalty; Edward IV’s youngest daughter, Princess Bridget of York, was sent to Dartford Priory between 1486 and 1492 after the fall of the House of York.  It could also be a way to display your family wealth; nunneries regularly reserved the position of abbess for daughters whose families owned their lands as part of their feudal estates.

But was this quite a dreadful as it sounds?

Well born women were expected to marry, produce an heir and spare, be submissive to their husbands and live a quiet shallow existence. Entering a nunnery offered women freedom and education, allowing them to divorce themselves from the expectations of their sex.  They were able to devote their lives to scholarship or rise to become abbess or prioress.  These were powerful women, who might even undertake building projects (typically a male preserve), as we see in the case of Joan Wiggenhall, prioress of an Augustinian nunnery in Norfolk.  In the first year of her tenure in 1420, she demolished and rebuilt a ruined barn, and subsequently built a new prioress’s lodge, oversaw the construction of a new church and replaced a malt house damaged by fire.

It is an interesting mix of embroidery artwork. Embroidery is a such an intricate work and this is definitely very powerful technique for cloth designing. You can use embroidery in many type of things. I like embroidered clothes for go to any event. Like hand embroidered coats, shirts, pants, trousers, jeans etc. are my favorite.