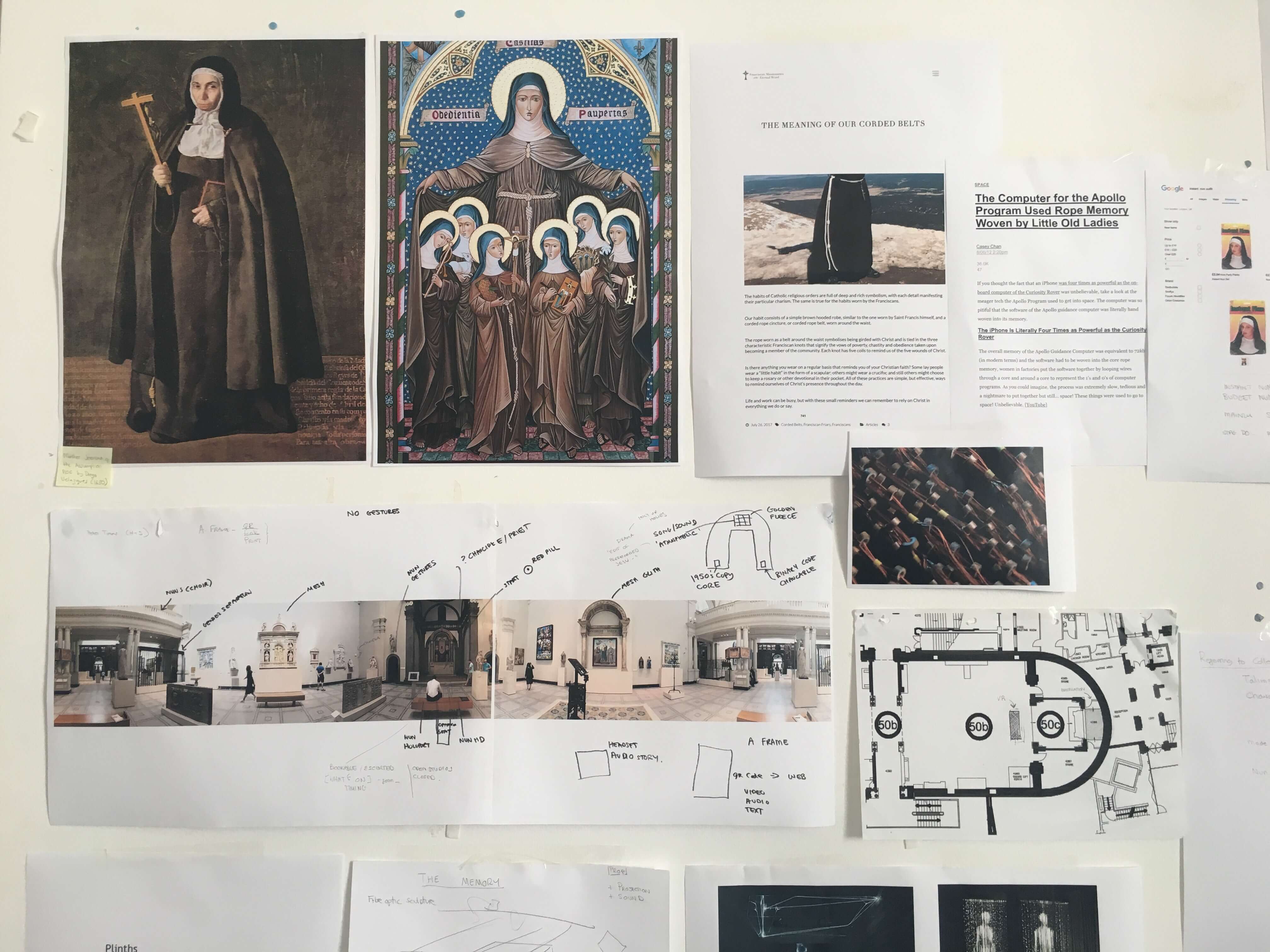 High above on the studio wall, a solemn-faced nun clutching a crucifix peers down at me. She is almost completely consumed by the heavy, brown folds of her habit and cloak yet her eyes seem to betray a secret knowledge.

The nun’s portrait forms part of a patchwork of images stitched artfully together by V&A Research Institute (VARI) Artist in Residence, Rachel Ara, on the wall of her studio in the Museum. It is interlaced with a painting of a group of nuns sheltering beneath the cloak of their Mother, an article on the women who hand-wove the software of the Apollo Guidance Computer into the core rope memory, ethereal images of fibre-optic light sculptures and a 360˚ panorama of the V&A’s Medieval and Renaissance Galleries, the site of Rachel’s newest work, The Transubstantiation of Knowledge, premiering at this year’s London Design Festival (15-23 September).

From a small coffee table in her studio, Rachel picks up a wooden frame to show me. It is wired with what appear to be fine metallic threads. The table is littered with similar objects of different sizes and various patterns. They are early examples of circuit boards, which hold and allow communication between many of the crucial components of a computer system. Networks of knowledge, which bear an uncanny resemblance to the fine, needlework produced by generations of medieval nuns. From this collection of images and objects Rachel’s ideas about her LDF work begin to germinate.

A British data and conceptual artist based in London, Rachel has over 25 years of experience working in the technology industry, from programming and analysis to systems design. She combines this knowledge with a Fine Art degree from Goldsmiths and a background in furniture making. For her VARI residency, Rachel has been tasked with researching the V&A’s systems and data and now she is drawing upon her findings to create a site-specific mixed-reality work exploring the hidden stories behind the Museum’s Santa Chiara Chapel.

As she walks around her studio, Rachel shares with me her concept behind her experimental new work and the real and imagined connections she forges between the chattering of the nuns of Santa Chiara, and the knowledge exchanges that paved the way for the processing systems of our digital age. She asks whether the intricate embroidery skills shared by the medieval Sisters might be considered a precursor to the Apollo sisters who wove software together by looping wires through a core and around a core to represent the 1’s and 0’s of computer programs?

In order to weave together an even more meaningful connection between the Santa Chiara Chapel and the nuns once hidden behind its screen, Rachel plans to reintroduce these women into the space using a pair of mixed-reality spectacles called a ‘HoloLens’. Visitors to the Museum during LDF will have the chance to wear the ‘HoloLens’ and interact with ‘holoported’ nuns roaming the Medieval and Renaissance Galleries.

The Transubstantiation of Knowledge proposes an entirely new way to explore the V&A’s rich medieval collections and enliven the gallery spaces. Encapsulating the creative experimentation at the core of VARI’s suite of research projects, Rachel’s work is also a tribute to the women of VARI and the V&A who have shared their knowledge with her:

‘The openness, collaboration and interest from the VARI department has fed greatly into my work and enabled it to expand at a pace and in directions I didn’t anticipate. The diversity of the research and inclusiveness has exposed me to subjects that I didn’t even know existed. Their knowledge has greatly influenced my final installation… which is in a sense celebrating their knowledge (data)’ – Rachel Ara, July 2018.

See Rachel’s ideas brought to life and experience The Transubstantiation of Knowledge from 15-23 September, in the Medieval & Renaissance Galleries, Room 50c, at the V&A.

Join Rachel as she talks about the research, which informed her installation at an in conversation event, Behind the work with Rachel Ara, on 17 September, from 12.15-13.00 in V&A Seminar Room 1 (Free event).

Visit Rachel Ara in her V&A studio to find out about her research into the data and hidden stories the Museum holds and experience some of the mixed reality technologies she has incorporated in her site-specific installation The Transubstantiation of Knowledge, on display in our Medieval and Renaissance Galleries.

Since meeting Rachel Ara at her first Open Studio at the V&A, and having enjoyed an unexpected and wide-ranging conversation with her, I’ve been re-examining my own experience of being taught by nuns in the early 1960’s at a now defunct Convent School.
I’m looking forward to the exhibition with great anticipation; the title ‘Transubstantiation of Knowledge’ is inspired. It encapsulates, for me, not only the threads of knowledge passed form woman to woman (or nun to pupil) but also some aspects of how recollection is transformed in the process of time passing.
Thank you, Rachel Ara and Rachel Feldman

Thank you for a great article, I loved this.

Thank you so much, Alethea. You might also be interested in joining us at the following ‘in conversation’ event which will take place at the V&A on Monday 17 September, when Rachel will talk about the research which informed her installation and the issues of feminism and gender that have repeated themselves from religious history through to the technology industries of today: https://bit.ly/2LWq5vG