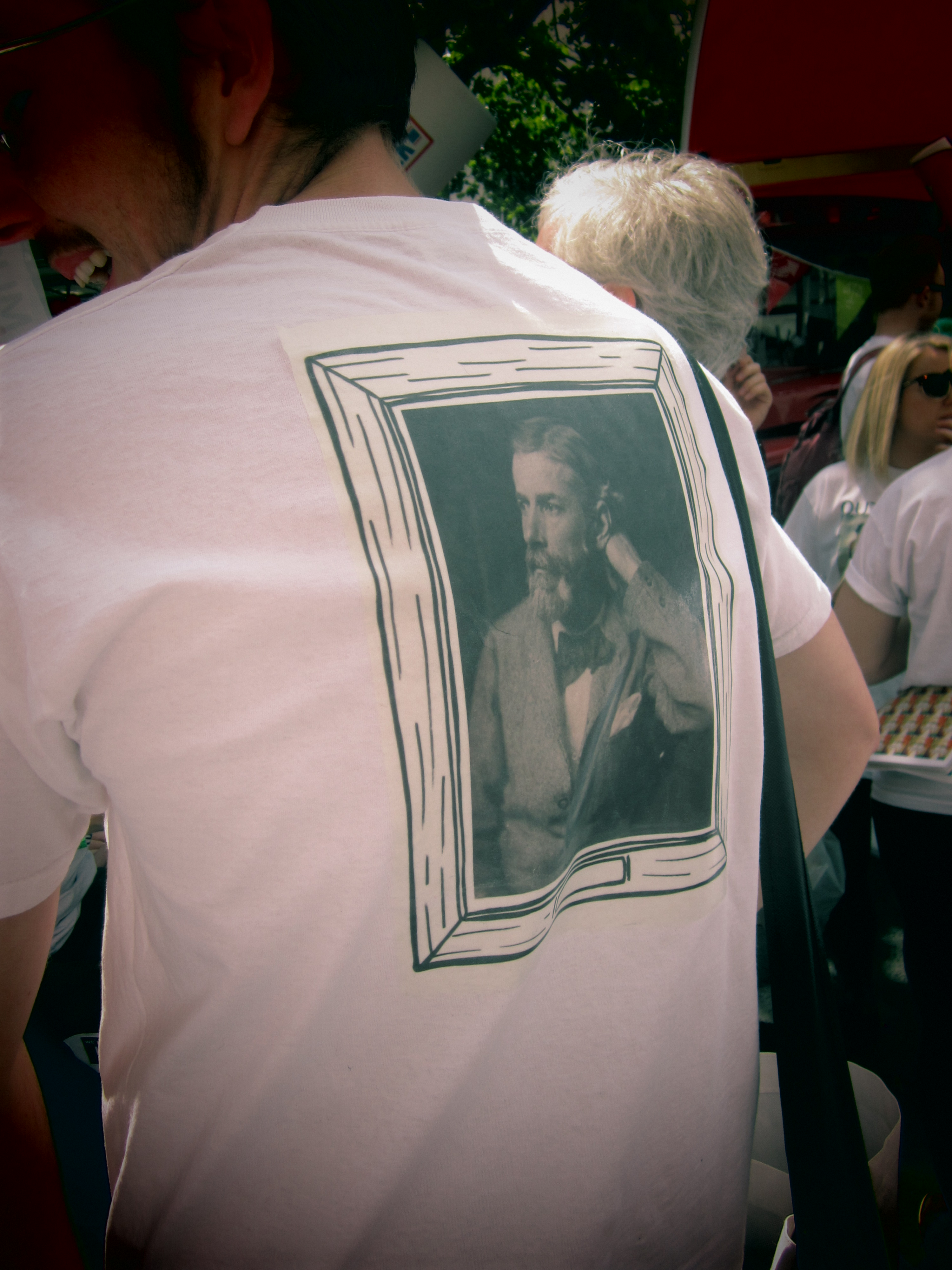 My fellow LGBTQ Working Group Co-Chair chose to adorne his Pride t-shirt with a portrait of Edward Carpenter (1844 – 1929), a socialist writer and campaigner for homosexual equality.

Zorian said he opted for this portrait from the V&A collection as he considers Carpenter such an inspirational trailblazer and an example of someone with an impressively ‘out and proud’ approach to life for the time; citing him as ‘one of the standout pioneers for LGBTQ equality in the 19th and 20th centuries’.

Born in Brighton, Edward Carpenter attended Trinity College, Cambridge before becoming a curate. He was heavily influenced by the minister at his church, the leader of the Christian Socialist movement, but left to become a lecturer in astronomy. During this period, he moved to Sheffield to live relatively openly in a same-sex relationship with George Merrill, which was to last for 40 years.

In 1883, Carpenter joined the Social Democratic Federation, and in 1885 left to join the Socialist League. Achieving growing acclaim for his poetry, he became a founder member of the Independent Labour Party in 1893.

As a pacifist, he was a vocal opponent of first the Boer War and subsequently the First World War. He also advocated vegetarianism and the wearing of sandals!

In the 1890s, Carpenter began to campaign against discrimination on the grounds of sexual orientation. He strongly believed that sexuality was innate.

He influenced Havelock Ellis’ 1897 publication Sexual Inversion, the first of his six volume Studies in the Psychology of Sex. The book was the first serious study of homosexuality published in Britain, based partly as a result of his awareness of the homosexuality of his own wife, Edith, and many of their friends, including Carpenter. In 1908, Carpenter wrote his own book on the subject of homosexuality, Intermediate Sex, an important, though at the time highly controversial, work.

This particular portrait of Edward Carpenter is from Volume I of Frederick Hollyer’s Portraits of Many Persons of Note. Hollyer was the photographer of choice for the artistic set of the late 19th century. His ‘Persons of Note’ series fills three volumes with nearly 200 portraits and comprises a pictorial Who’s Who of late Victorian and Edwardian celebrities. When we look at a photograph recording the entire page, we can see that a piece of paper bearing Carpenter’s signature was inserted.

Carpenter believed that a future society must change hearts as well as heads. Looking at the portrait, Zorian and I both felt that it seemed to capture a gentle and reflective, yet focused, individual with an eye on the future.

If you are interested to read more about Edward Carpenter, Historic England’s Pride of Place website has further details about Carpenter and his house Millthorpe in Derbyshire, here.