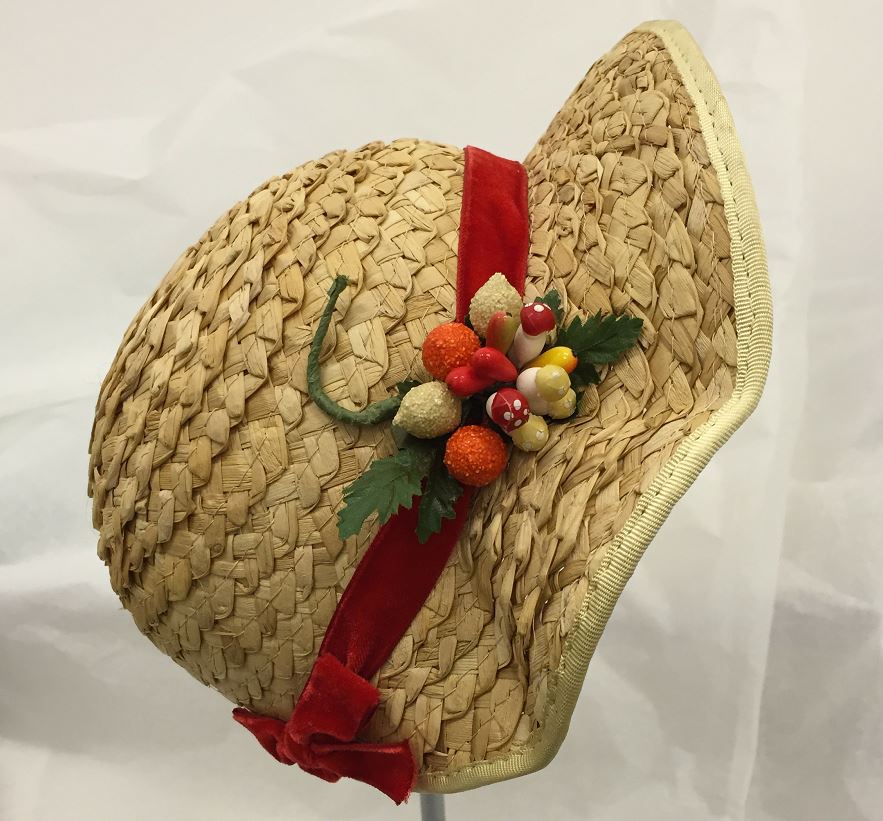 Can you separate the wheat from the chaff when it comes to straw hats? Sadly I struggle to, which is why it’s so helpful to have students from the ‘Period Hat’ class at Morley College, London and their tutor Jane Smith come to the V&A Museum of Childhood to study our children’s hat collection with me. During our monthly handling sessions this studious group explores, interrogates and discusses the techniques, styles and materials which went into making our tiny trilbies, bonnets and cloches. Over the months our interests have been piqued with fascinating fascinators and hats that are brimming with style with any new photographs or information gleaned is uploaded and shared on the V&A Search the Collections website. There have been some excellent discoveries, below are some from the latest session:

Shellac, gimp and beaver, three words I never thought I’d use in a sentence in my work at the V&A. But all three terms can be used to describe this elegant Victorian riding hat. Made of black beaver felt it is adorned with a velvet and steel buckle and picot-edged ribbon. It was highly proofed with shellac to make it stiff (not too dissimilar to the nail-polish process). Inside it has a decorative red trim, which is called gimp (totally dissimilar to the scenes from ‘Pulp Fiction’). On close inspection we discovered a piped wired band was inserted into the brim’s rim to support its graceful curve. This hat is definitely a case of style over safety as its thin shell would have offered the infant rider no cushioning whatsoever if they fell. This hat could have been worn by either a boy or girl.

Toadstools and metal blocks were the unexpected features of this harvest festival bonnet. The straw bonnet was made by plaiting together wheat fibres and then coiling the plait and sewing together the edges. It can be identified as British due to this plaiting and coiling technique. The distinctive crown and scalloped shaped brim were made by heating the whole piece, then pulling it onto a metal block and cutting it afterwards. The decorative bunches are made up of plaster bananas, lemons and toadstools. This is one of a large group of fantastic childhood objects including toys, birthday cards and fancy dress donated by Eileen Brock. Eileen was born in 1915 to a middle-class family living in North London. Her mother, Amy Piercy, was the youngest of a close family of six sisters so Eileen’s early life was busy with visits and entertainments with aunts and cousins. This wonderful collection offers rich insight into the everyday life of a young girl growing up after the First World War and can be viewed online or at the V&A Museum of Childhood.

Designed for a small child it is made of blue silk velvet lined with pink silk, and edged with delicate silver lace. The hood is gathered at the back of the neck, and has tying strings of broad ivory ribbon. It was among the belongings of the Scheibler family, who were textile merchants and weavers in Alsace-Lorraine during the 17th and 18th centuries, which may account for why such luxurious materials were used for an infant’s hood.

This hat is so much more than it first appears. It was made nearly 200 years ago out of wheat in the form or a flat-topped military cap. It boasts some fantastic features including an intricate straw construction, undulating crown, twisting straw braid, flat-edged brim and peak! We’ll be uncovering more hidden gems in our hat collection next month.

This is a fantastic write up of the hats. I would love to say that one or another was my “favorite” but each one is special for its unique offering. Ultimately however, I would have to say the boy’s military straw hat, for the craftsmanship and amazing use of straw. Thank you.