Within the hundreds of captivating paper peepshows newly acquired by the National Art Library from the Gestetner Collection, there is one peepshow whose story and splendour, I feel, eclipses all the rest. Handmade and painted in watercolour, ‘View from L’Angostura de Paine in Chile’[i], ca.1835 (fig.1), is as intriguing as it is beautiful. This humble peepshow captures not only the stunning Chilean landscape but the story of a person whose feats would be remarkable for anyone nowadays; but as a woman born nearly two and a half centuries ago, they are nothing less than audacious.

The work is attributed to Maria Graham, later Lady Callcott. Maria was an artist, world traveller, published author, botanist, editor and art historian, whose documented observations altered how the world’s creation was considered. Born Maria Dundas in 1785 in Cockermouth, she was 23 years old when she travelled out to India and en route fell in love with naval officer, Thomas Graham, who she married. Eleven years and five published works on India, Italy, the French and Spanish War and Nicolas Poussin later, Maria joined her husband when he was awarded captaincy of the HMS Doris to Chile. Good fortune eluded them and Thomas died during the passage. On disembarking at Valparaiso in Chile, Maria was left with two choices, to return home or continue undeterred:

‘I believe, what must be done is better done at once. I left the ship shortly afterwards. I hardly know how I left it, or how I passed over the deck where one little year ago I had been welcomed with such different prospects and feelings.’[ii]

From the moment she sets foot off the ship Maria eschews the familiar and instead strives for adventure. Her escapades across Chile are recorded in her published ‘Journal of a residence in Chile during the year 1822; and a voyage from Chile to Brazil in 1823’. It was in this work, that she documented a series of major earthquakes and the effects on the surrounding landscape, causing the earth to rise up from the sea:

‘We went chiefly for the purpose of tracing the effects of the earthquake along the rocks. At Valparaiso, the beach is raised about three feet, and some of the rocks are exposed.’[iii]

She was one of the first Western Europeans to have witnessed and documented the shifting tectonic plates. Her text informed the geologist Charles Lyell’s groundbreaking work ‘The Principles of Geology’ published in 1830, and was supported by Charles Darwin’s accounts from Chile published in 1839 in ‘The Voyage of the Beagle’.[iv]

Despite experiencing the ‘convulsions of nature’ from which there is ‘neither shelter nor escape’,[v] Maria embraced the experience with gusto:

‘I like this wild life we are living, half in the open air; every thing is an incident; and we never know who is to come, or what is to happen next, we have the constant stimulus of curiosity to bear us to the end of every day.’[vi]

Packed with humour and poetic observations, this journal also contains exquisite aquatint plates based on her artwork, including one entitled ‘View from L’Angostura de Paine in Chile’ (fig. 2). This printed plate is almost identical to the handmade, water-colour peepshow now in the National Art Library’s collection which, on the basis of this comparison, has been attributed to Maria.

In her journal Maria describes looking arriving in L’Angostura from Paine:

‘A narrow pass, or Angostura de Paine, commonly called here I’Angostura, through which the road leads to Rancagua. From Paine, where there is a post-house, the road is bordered on each side with magnificent trees, chiefly maytenes[vii]; and country-houses and rich plantations take place of the wide and wild plain that we had passed.’[viii]

It’s not hard to imagine that it is these magnificent trees and rich plantations which are depicted on the print and on the painted peepshow of this landscape.

This peepshow is an accordion-style device, consisting of three cut-out panels attached along the sides by paper bellows to a front and back board (see fig. 1). The front panel, probably inspired by H.F. Muller’s earlier ‘Teleorama/ No.1’ peepshow, ca. 1825 (fig.4), [ix] uses the bowing branches of a tree to create a peephole.

To reduce the size of the aperture additional branches painted on a board have been stuck onto the front panel in the Chile peepshow (fig. 5). As we look through the branches, a bright landscape of aquamarine blues, green verditer and sienna yellows unfurls. The lightweight paper bellows expand to reveal a magical riverside landscape, dotted with cacti and lush vegetation. In the first cut-out panel, we see two figures, a man and a woman meeting along the road. These cut-out figures have been painted independently from the original aquatint’s scene and glued onto the panel (fig. 6).

The man with his back to the viewer wears a red cape/poncho, breeches and tall black hat, the woman who faces us is dressed in long skirts and a shawl. The woman’s pale complexion, blonde hair and attire raise the possibility that this could be a self-portrait. The man’s clothing matches descriptions from Maria’s earlier travels in her journals on traditional Chilean dress:

‘In some districts black felt hats are used; in others, high caps. When the Chileno rides, which he does on every possible occasion, he uses as a cloak, the poncho, which is the native South American garb.’[x]

The middle cut-out panel depicts a house and to the side two fishermen casting off from a small island which punctuates the placid riverside scene (fig. 7). On the last cut-out panel, a small hamlet is pictured nestled at the foot of vertiginous snow-capped mountains, whose jagged peaks cut into the steel blue skies of the back board (fig.8).

Each panel is executed with delicate attention to detail from the woman’s curly hair to mooring posts at the harbour’s mouth, and this exactitude is extended to the bellows which have been painted to match the ground, sea and sky. Playful light effects pinpoint particular plants, clothing folds and buildings, forcing the viewer’s attention to ricochet across the panels. The illusion of depth is expertly achieved through aerial perspective. Natural features within the landscape are accentuated to create vanishing lines, which lead the viewer’s gaze towards a central vanishing point. The peepshow exhibits deft draughtsmanship, brushwork and understanding of composition.

The construction of the peepshow lacks the same level of exactitude with the front panel being much larger than the rest. All the panels have been reinforced at the sides with cotton covered metal stents. Thin paper bellows have then been sewn onto the panels to create the concertina design. The peepshow’s components suggest that this peepshow may have been constructed at an earlier date than previously considered with the paper bellows bearing the watermark of W. Lloyd & Son 1802, if this is correct it would make it the earliest paper peepshow in the National Art Library’s collection.

Regardless of its age or construction the effect of the peepshow is magical and like Maria Graham’s travel writings, it evocatively brings the landscape and the people of Chile to life.

To find out more about ‘View of L’Angostura de Paine in Chile’ peepshow, ca.1835 by Maria. Graham, Museum No. Gestetner 228, go to the V&A’s Search the Collections or on the National Art Library’s online catalogue.  The ‘View from L’Angostura de Paine in Chile’ peepshow joins Maria Graham/Lady Callcott’s correspondence and books in the National Art Library’s holdings, all of which can be viewed by appointment.

This peepshow along with over 360 others was accepted under the Cultural Gifts Scheme by HM Government from the collections of Jacqueline Gestetner and Jonathan Gestetner and allocated to the Victoria and Albert Museum in 2016.

[vii] Maytenus boaria is an evergreen tree of the family Celastraceae, native from South America 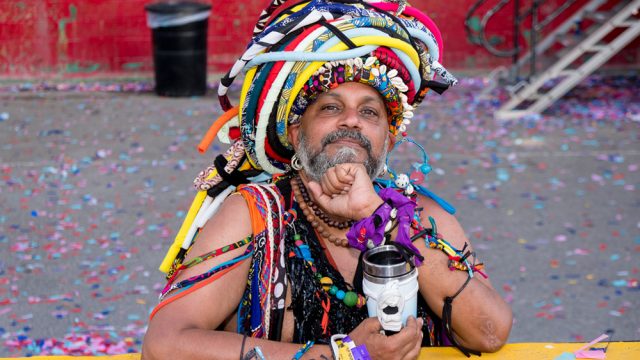