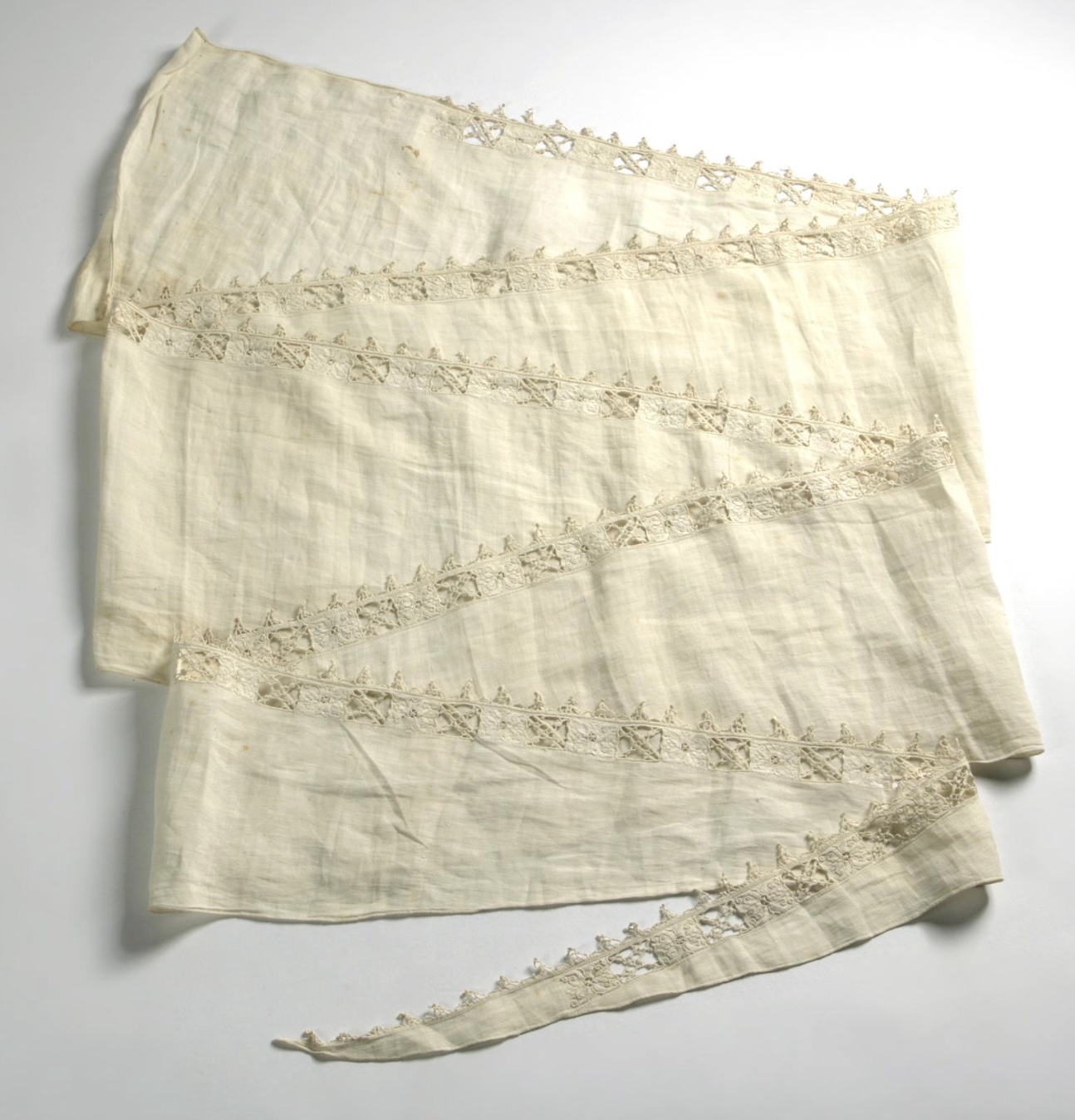 I thought the task of changing a baby’s nappy was pretty arduous, but recently I have been looking at the babies clothes from 300 years ago and I can only conclude that children and their carers nowadays have never had it so easy! Our stoic forebears didn’t have babygros with quick release snappers or disposable nappies instead they would wrap/swaddle their charge in up to 12 different layers of clothing. A task made even more impressive when you consider that it was all held in place with pins, there were no washing machines and soap was taxed as a luxury!

Swaddling, the act of binding a baby’s body tightly in a band of cloth has been around for thousands of years and has been used by people of different nationalities and socio-economic backgrounds. Parents and carers swaddled their children for a range of health and safety reasons. They believed that binding the baby’s limbs with a band of cloth to the body would ensure that the limbs grew straight:

‘Infants are tender twigs and as you use them, so they will grow straight or crooked’ (Jane Sharp, The Midwives’ Book, 1671)

There was also much concern that babies were more vulnerable to the cold and carers would dress the child with a plethora of layers. These layers included a rectangular shaped clout or napkin (nappy). The nappy would be folded in two and inside they would put a bed of sphagnum moss or soft rags to absorb the waste, which could then be rinsed out and reused. There would be a ‘bellyband’ or a binder which was a strip of linen cloth which would be wrapped around the baby’s stomach to support the abdomen and protect the bellybutton. On top of that would be a front or back opening, linen shirt. On the baby’s head would be a triangular shaped cloth and one to two caps. The first cap was usually rather plain with the second one being rather more decorative. Then a ‘bed’ which was a rectangular shaped cloth with pleats at the top, would be wrapped around the baby and folded over its feet. This would effectively make a tidy bundle of the baby and hold down its limbs. Over this a three metre long swaddleband (a band of linen) would be wrapped or swaddled around the child in a variety of diagonal or herringbone patterns. A bib could then be added on top. The last layer was a ‘stayband’ whose function was to keep the head stable. This band was placed under the cap and pinned to the clothes at shoulder level. London physician, William Cadogan commented on the common concern about keeping babies warm in his groundbreaking ‘Essay upon nursing: and the management of children from their birth to three years of age’, published in 1748:

‘The firſt great Miſtake is, that they think a new-born Infant cannot be kept too warm; from this Prejudice they load and bind it with Flannels, Wrappers, Swaths, Stays, &c. commonly called Cloaths; which all together are almoſt equal to its own Weight.’ William Cadogan.

A swaddled child was rendered immobile, preventing it from roaming and possibly injuring itself. At this time, carers concern over children’s health was substantiated with death lists recording half of those that died were children under 5 years old. However Cadogan identified that carers were actually contributing to the high infant mortality rate through swaddling. There were many advocates against swaddling including John Locke who wrote in 1693 in ‘Some Thoughts Concerning Education’ that children’s clothes should not be too heavy, tight or warm. But it was the London-based physician William Cadogan who provided evidence through his research with orphans at the London Foundling Hospital that children who were tightly swaddled were much weaker than those that weren’t.

‘The Mother who has only a few Rags to cover her Child looſely, and little more than her own Breaſt to feed it, ſees it healthy and ſtrong, and very ſoon able to ſhift for itſelf; while the puny Infect, the Heir and Hope of a rich Family lies languſhing under a Load of Finery, that overpowers his Limbs, abhorring and rejecting the Dainties he is crammed with, till he dies a Victim to the miſtaken Care and Tenderneſs of his fond Mother.’ William Cadogan.

Cadogan used scientific equipment such as thermometers to prove that babies were warmer than their adult counterparts and required less layers:

‘It wants leſs Cloathing than a grown Perſon, in proportion; becauſe it is naturally warmer, as appears by the Thermometer.’ William Cadogan.

He also advocated for children to be breastfed rather than fed gruel, that they be changed regularly and liberated from the confined of swaddling for the healthy development of their bones, muscles and bowels:

‘Weight and Heat of theſe Swaddling-cloaths, they are put on ſo tight, and the Child is ſo cramp’d by them, that its Bowels have not Room, nor the Limbs any Liberty, to act and exert themſelves in the free eaſy manner they ought.’ William Cadogan.

Under the influence of Locke, Cadogan and later Jean-Jacque Rousseau the attitudes and practices of children’s clothing and care changed immeasurably. And by the end of 18th century in Britain the practice of swaddling had been abandoned for loose-fitting, lighter, wrapping gowns and frocks for all infants.

An essay upon nursing: and the management of children, from their birth to three years of age. By a physician. In a letter to one of the governors of the Foundling Hospital. Published by order of the General Committee … by Cadogan, William, 1711-1797. at http://ota.ox.ac.uk/id/5515 via http://writersinspire.org/content/essay-upon-nursing-management-children-their-birth-three-years-age-physician-letter-one. Accessed on Saturday, March 12, 2016.

Extremely interesting !! I am 71 years old …My mother was raised in a Welsh Household. When I first got pregnant with my first child she went to work sewing up swaddling blankets….A lot simpler then the Victorian times…!! She just would show how to wrap my babies like a Crescent Roll in a napkin….The American Indians would waddle their babies also !! Thank you for sharing.