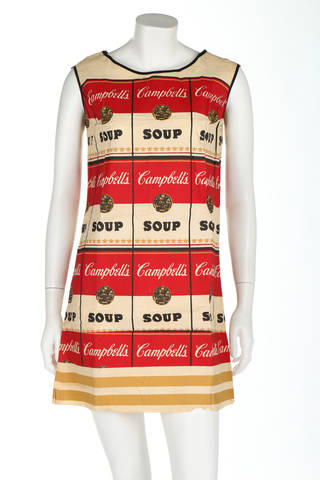 On a recent Friday Late at the V&A, I paid a leisurely visit to the exhibition ‘You Say You Want a Revolution? Records and Rebels 1966 – 1970’. My Bluetooth headset played the haunting sound of an organ, the opening of ‘A Whiter Shade of Pale’ by Procul Harum. The exhibition was busy and I moved into an open space before ‘The Souper Dress’ display.

I was transfixed by the Souper Dress mannequin and intrigued – the dress was paper and possessed a tactile appeal. Its surface had a fine granular texture. Paper dresses were a short-lived fashion phenomenon of the 1960’s. This dress was one produced by the Campbell Soup Company in 1966. Originally, a Souper Dress could be acquired in exchange for labels from Campbell’s vegetable soup cans. The fabric pattern references Andy Warhol’s 1962 Pop Art series, depicting all 32 varieties of Campbell’s soup. Warhol printed the image of each soup can onto an individual canvas, using the mechanized process of screen printing.

Paper dresses had sold at a high price in American department stores ($8). They had an ephemeral appeal in being a disposable commodity. Paper clothing embodied a carefree approach to dressing, complimenting the rebellion and flamboyance of 1960’s culture. The popularity of paper clothing declined after 1968. The trend lost its charm, perhaps due to the limited quality and durability of the paper garments.

In contrast to the paper dress, Andy Warhol’s soup can motif had an enduring impact, as Pop Art. The contemporary fashion designer Vivienne Tam recalls Pop Art in her 1995 ‘Mao Collection’; she repeated an iconic image of Chairman Mao (1893-1976) on a series of garments. Specifically, she used a bold, black and white portrait of Mao on a women’s polyester dress suit (in the V&A collections). As a piece of high fashion, the suit juxtaposes different images of Mao found in political propaganda. During the mid-twentieth century in the People’s Republic, jacquard portraits of Mao were woven in two colours and displayed in public. The use of a sparse, bi-coloured image has been associated by Tam with the positive/negative dichotomy of Mao’s regime.

My reaction to the Souper Dress has been positive and productive. I have purchased a simple shift dress pattern to create my own version. Unlike the Souper Dress, my project will not be made of paper. I am searching for a poignant, printed fabric to exemplify 2017. The Campbell’s soup can print is vibrant and timeless. Its cohesion with fashion, in the form of the Souper Dress was a soupreme achievement.