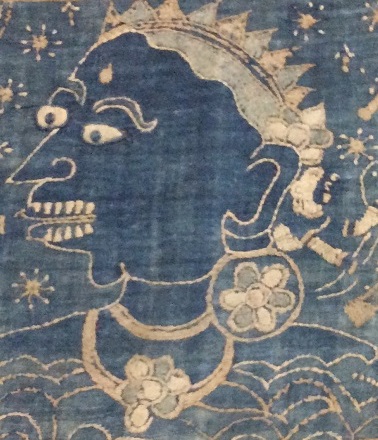 We recently returned from a week’s visit to Delhi and Jaipur, where we visited some of the designers showing work in the exhibition and also picked up several of our new acquisitions from them – about which there will be more in a separate blog. One highlight of the trip was a visit to the National Museum in Delhi, where Anamika Pathak, the Curator of Decorative Arts, showed us round the beautiful exhibition Nauras: the many arts of the Deccan, which is showing there until 20th March. To our delight, one of the most dramatic pieces in the exhibition is the magnificent South Indian temple hanging that we will be borrowing for The Fabric of India, and about which Anamika has contributed an essay for the book of the exhibition. Over 10 metres long and 2 metres high, this huge hanging is made of cotton and is embroidered in shades of blue, brown and white with scenes from the Ramayana. This great epic poem focuses on Rama, the seventh incarnation or avatara of the Hindu God Vishnu, and the hanging depicts episodes from the fourth and fifth books of the seven-volume work.

The central panel shows Rama assuming the kingship of Ayodhya after his return from 14 years of exile and his battle against the demon king Ravana who had abducted Rama’s wife, Sita. The hanging is so large that we won’t be able to show its full length in our exhibition: we will show the central panel and two of the narrower panels on either side, as well as the beautifully executed scenes in the top and lower borders of those sections. The rest will be cunningly wrapped out of view around a specially made mount. This image from The Hindu newspaper gives an idea of its scale, although even this image does not show the whole piece.

One noticeable feature of the hanging is that many of the scenes feature Hanuman, the monkey god who is Rama’s most devoted ally in his fight against Ravana, suggesting that whoever commissioned the piece could himself have been a devotee of Hanuman. Hanuman is recognisable in many of the scenes, like this one in which he is disguised as a Brahmin, as well as in his usual monkey form, meeting Rama and his devoted half-brother Lakshman.

Other scenes show well-known events from the Ramayana such as the one in which Rama convinces the monkey king Sugriva of his prowess by shooting one arrow through seven trees. In this version of the story, the trees are held on the back of a serpent, and Rama is shown stepping on its tail to make it and the trees stand upright: the snake also falls victim to Rama’s arrow. The snake doesn’t appear in all versions of this scene: small regional variations like this may help identify where the piece was made, which at present is an unanswered question.

The hanging is populated by many weird and wonderful beings, from the 10-headed Ravana himself to wild-haired hermits and dread-locked sages. One of my favourites is the formidable Lankani, the giant female guardian of Lanka, Ravana’s capital, seen here with the diminutive figure of Hanuman perched on her shoulder, bravely wielding his club. Do come and find her in this amazing hanging when it is on display in The Fabric of India.

I just love the way stories are told through these hangings – we can learn so much from these ancient arts. Can’t wait until the exhibition. Please have a look at what I do – Indian Crafts study trips on Facebook. Textiles tours in India to explore traditional skills in a rapidly changing world.

I loved the big hanging pics
lovely
thanks