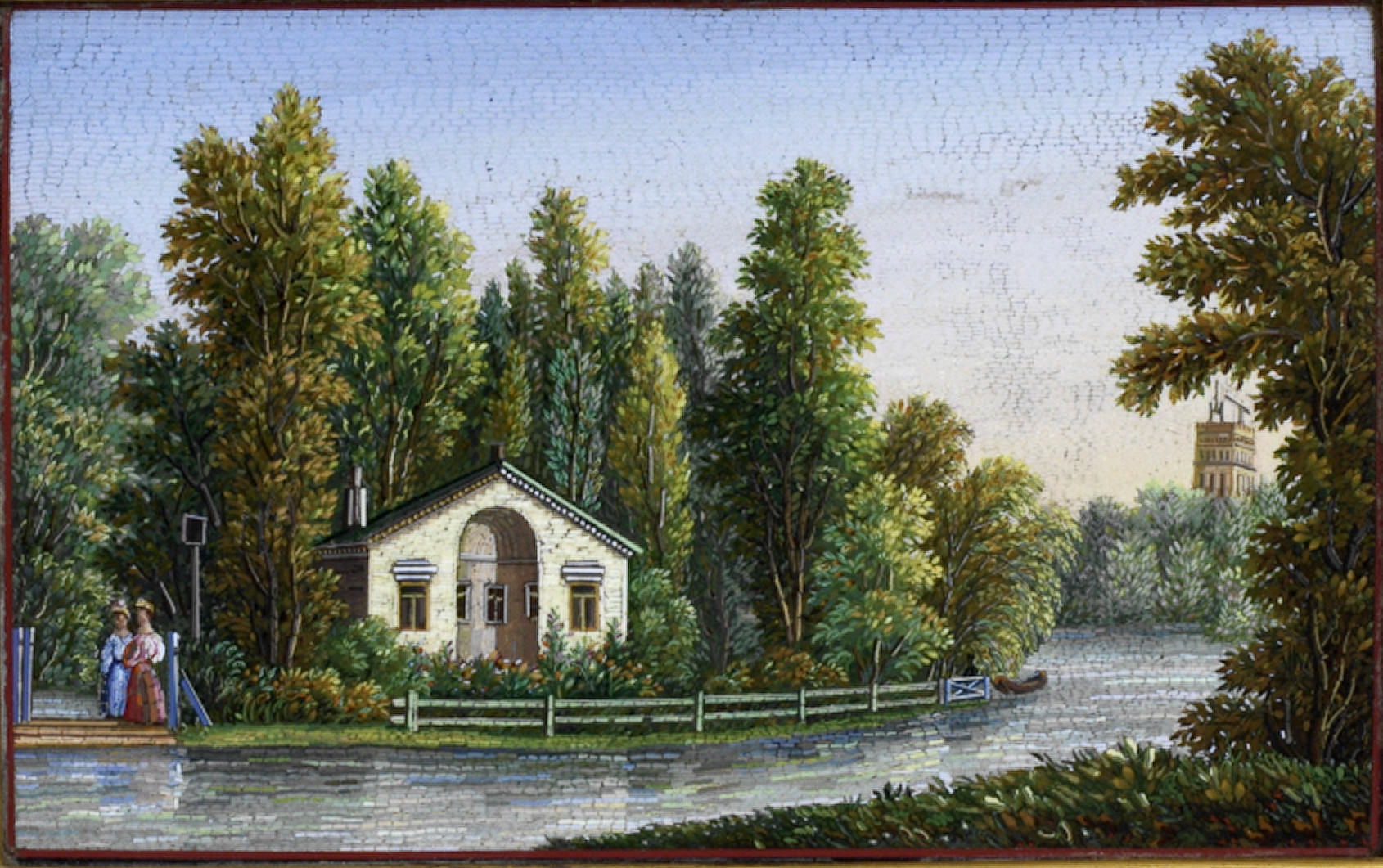 On 4 March 2015 I gave an illustrated lunch-time talk at the V&A on Russian Country Houses which was well received and well attended. Afterwards, Katrina Warne, a regular visitor to Russia, identified the micromosaic scene on the Gilbert Collection jewel casket which I had illustrated as a view of the Gothic Priory at Gatchina. This is one of the  garden features in the landscape surrounding that Imperial Palace south of St Petersburg, built for Tsar Paul I, son of Catherine the Great, who reigned from 1796 until his death in 1801. I had demonstrated how beautifully the mosaicist had captured the fresh spring leaves of the Gatchina park trees comparing a photograph taken as a Likhachev scholar in May 2014.

Katrina demonstrated that the mosaic actually shows the house on Children’s Island at Alexander Palace, Tsarskoye Seloe. It was built by order of Tsar Nicholas I (reigned 1825-1855) as a playhouse for his children, designed by the architect Gornostaev and built of brick covered with teal coloured stucco. Inside, there were five rooms, a drawing room and a bedroom for each of the Tsar’s children. The future Tsar Alexander II’s room had furniture upholstered in leather; his sisters, Maria, Olga and Alexandra, had furniture covered in printed cotton. The island was approached via a pontoon style bridge, with ropes strung across. By standing on the wooden pontoon, you could pull yourself across. In winter the pond was frozen and the children walked across.

The playhouse was used by the children of successive Tsars. The children of the last Tsar Nicholas II had access when they were imprisoned there in 1917. The casket originally belonged to Grand Duchess Olga Württemberg (1822-92), the second daughter of Tsar Nicholas I. Her profile appears on the centre of the micromosaic table of ‘The Flora of the Two Sicilies’.

The mosaic on the jewel casket is attributed to Giorgio Ferdinand Wekler (1800-1861) appointed first Master of Mosaics at the Imperial Academy of Arts, St Petersburg, in 1822. The Gilbert Collection has four other micromosaics signed or attributed to Wekler. The earliest is an interior view of the Capuchin Church, Rome after a popular painting by F.M.Granet exhibited at the Paris Salon of 1819. A copy acquired by Tsar Alexander I (reigned 1801-1825) between 1820-1825 hung in the Winter Palace.

Wekler captured another painting of a cockerel by the 17th century Dutch artist Paul Potter for the same patron which he signed and dated 1834. A gold snuff-box showing Alexandria Cottage in the grounds of Peterhof Palace dates from the 1840s and commemorates Nicholas I’s favourite setting. Wekler specialized in landscapes and animal scenes and the Gilbert plaque of two Italian greyhounds which is signed and dated 1853 is a later example of his work.

The gilt-bronze jewel casket, which can now be dated to after 1825, is decorated on each side with oval mosaic scenes show playing putti; the perfect accompaniment to a beloved childhood haunt.The casket is decorated with arches, fleurs-de-lis and leaves; appropriate rural imagery.

Nearby, ‘Good Sasha’s Headland’, named after Tsar Alexander II, was where various family pets were buried. Grand Duchess Olga would have treasured these childhood associations whenever she opened this enchanting casket to retrieve some personal jewellery.