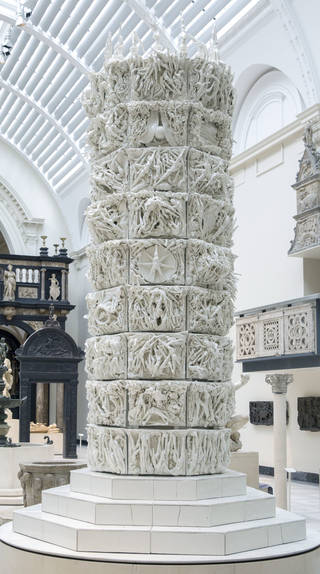 The title 399 Days imparts the duration of the sculpture’s construction. Through this practical detail, the viewer is made aware of Rachel Kneebone’s corporeal labour. Extending on from the physical nature of its creation, 339 Days tackles the subject of the body, bodily form is represented as incomplete, in a state of transformation. Therefore, the work immediately provokes questions that its title does not answer.

In the presence of 399 Days I recognise an abundance of forms, all ambiguous. The structure resembles a column, comprised of nine tiers of tiles. The tiles themselves are covered in legs and torsos.  These body parts are gender-ambiguous and captured in flux. Each body part is half-emerging from a tile, or appears to be sucked back into it. The bodies are anonymous. (No heads are visible.) There is a sense of freedom in the way bodies are depicted. Body parts are not confined by traditional contours.

When I contemplate 399 Days, I perceive organic objects – foliage, flora and tundra. In each tile, the formal boundaries of plants and humans become blurred. Ovid’s Metamorphoses was a source of inspiration for Rachel Kneebone. In Book 1, Ovid describes the myth of Apollo and Daphne. The nymph Daphne flees from the amorous advances of Apollo. She is saved by the river God Peneus, by being transformed into a tree. The psychoanalyst Darian Leader has associated the tiles with a coral reef. The likeness is satisfying; it imparts the porcelain with the enigma of deep sea life.

I find that 399 Days has an invigorating effect, like breathing sea air. The porcelain is challenging in terms of formal identification and directional movement. For example, the vertical column is counteracted by the multi-directional character of individual tiles. Specifically, the writhing human forms defy directional clarity. As a result, it is an unsettling and emotive experience to contemplate the sculpture. The viewer is encouraged to move around the column. It is possible to see additional tiles within the column, through vertical breaks in the exterior tiles.

Rachel Kneebone liberates the human body, by refusing to define it. 399 Days awakens an awareness of the body beyond familiar delineation. The sculpture is accessible as it offers the viewer fundamental, primal forms. 399 Days is successful and stimulating because it captures states of transformation. I refer again to Darian Leader for an apt conclusion:

If you are seeking an enlivening encounter with art, bring your own body to see 399 Days. Rachel Kneebone’s sculptures are on display for free at the V&A Museum until January 14th 2018.

399 Days awakens an awareness of the body beyond familiar delineation. The sculpture is accessible as it offers the viewer fundamental, primal forms. Great!

Thanks for that musical thing.