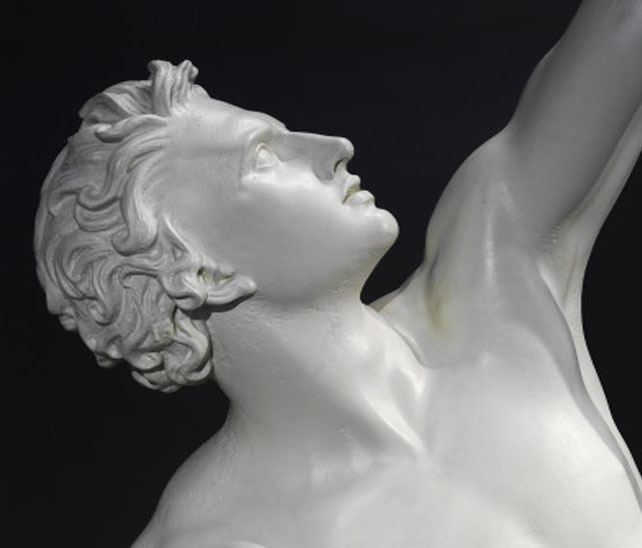 If you’ve ever visited the vast Marble Floor of the V&A Museum of Childhood, you may have noticed a rather pale gentleman stood near the café. Lunging back, with a bow poised and ready to shoot, he’s no ordinary visitor to the Museum of Childhood but rather a mysterious sculpture that has stood in Bethnal Green for 90 years. But exactly how did this nude neo-classical sculpture end up in a Museum dedicated to the display of childhood objects? Who is this sculpture by, and how did it end up here?

The 14 March 2017 marks 122 years since the death of John Bell, an artist who made a piece of sculpture described in The illustrated London News as ‘One of the most important specimens of the British School of Sculpture.’ This was The Eagle Slayer a work that clearly shows Bell’s talent as an artist and also highlights the skill and craftsmanship of the unknown workers who crafted this piece in Coalbrookedale from iron. Now stood amongst the wrought iron pillars of an east London Victorian building, this was the first British full-length sculpture to be cast in a material usually reserved for industrial use.

John Bell was born on the 19 August 1811 in the small village of Hopton, now in Norfolk. He was a driven man and as soon as he finished his education at the Royal Academy schools he set himself up as an independent artist, although if he wished his family could have supported him financially. He was a success almost immediately and first exhibited at the Royal Academy at the age of 21. His connections were good also, Bell became a good friend of Sir Henry Cole who alongside Prince Albert, conceived The Great Exhibition and the museums in South Kensington that followed.

John Bell would go on to exhibit 66 more times at the Royal Academy.  The Eagle Slayer came relatively early in his career being number 12 in a chronological list of 120 known sculptures, it had first been cast in plaster and exhibited in 1837. In 1858 Bell described in his book ‘British Sculpture’ some of the problems he faced as a sculptor;

The art of Sculpture is not like that of Painting, in which a canvas and a few colours and brushes constitute a sufficient plant and stock with which to commence work. On the contrary, every operation of the sculptor, especially if he strive, as has been said, to write his name in marble, is attended with expense. He has to deal with such weights that his studio must be strong as well as well lighted, a combination not often to be obtained without considerable rent or expenditure. The marble for a life-sized statue, with all the risk of its turning out with a great dark vein or shake in it … is not to be obtained in this country for less then £100…

It would be wrong however just to classify Bell as a sculptor, he was, in fact, a founding

member of The Etching Club and in 1849 won the Society of Arts silver award for an ornate wooden casket which became part of the furnishings in the House of Lords.

At the time of the casting of Eagle Slayer in iron, c.1851, Coalbrookdale in Ironbridge, was the centre of the industrial revolution. It was here over the River Severn in Shropshire that an Iron Bridge by Abraham Derby III was erected in 1779. This, like The Eagle Slayer, was the first of its kind and paved the way for iron to be used in bridges and buildings.

The painting by Philip James de Loutherbourg ‘Coalbrookdale by Night’, 1801 powerfully illustrates how this area, including the sky itself, was dominated by industrialisation. This is no surprise when you consider that at the time Coalbrookdale was the largest foundry in the world.

It was here that Bell choose to cast The Eagle Slayer. Before this date it was thought that Iron was not suitable for artworks as it could not reproduce beauty and was only suited for industrial use. Although Bell had made other sculptures from cast-iron including this ornate door stop in the V&A Collection.

Bell was very hands on with the casting of The Eagle Slayer at Coalbrookdale. At one time he lodged in one of the company’s houses and was engaged in all the processes that saw the sculpture emerge from the furnaces.

It must be highlighted that arguably Bell’s most successful, in commercial terms, sculpture was not The Eagle Slayer, but Dorothea.

In 1838-39 Bell begun working on sensual female figures. Dorothea was one such work, exhibited in 1839. It was immediately popular as many people thought it looked like the 20 year old Queen Victoria. It was reproduced in many forms and was a bestselling statue for Minton and was in production for over fifty years. The sensual lines of Dorothea can certainly be seen echoed in the earlier masculine

form of The Eagle Slayer.

After being exhibited at The Great Exhibition of 1851 The Eagle Slayer was presented by the Coalbrookdale Company to the Victoria & Albert Museum in South Kensington and was placed in the gardens outside the original V & A building.  It stood once again outside the original structure after the building itself made its way to the East End of London by horse and cart and became known as the Bethnal Green Museum in 1872, Bell’s sculpture would follow in 1927 when the Museum re-opened after the First World War, when the Museum repositioned itself as an institution which not only showed nineteenth century art but also focused on the manufacturing trades common to the local area at the time. The Museum would go on to reassess its Collection again in the 1970s when Sir Roy Strong, Director of the V&A, Sir Roy Strong, made the decision that the Museum would officially be dedicated to the subject of childhood. The Eagle Slayer stood outside the Museum until its redevelopment in 2003, at which point it was moved inside to open the refurbished Museum of Childhood as a symbol of the Museum’s longevity and original identity.

For a detailed biography on John Bell please see –

The piece about The Eagle Slayer is very interesting. I read it when it first appeared and instantly saw a spelling mistake but did not want to mention it as it sounds mean when the article is interesting. However the spelling mistake still remains so I think it is time to put it right. Coalbrookdale has only one “e”. The etymology has nothing to do with coal but is probably “cold”, the brook is cold. The brook runs through a dale hence Coalbrookdale. One of my earliest memories was learning by heart place names from what is now known as Ironbridge, that is another story and a fascinating one. The name was probably used to encourage tourism. I will go and visit The Eagle Slayer in his new home, he must miss hearing familiar London voices. I hope others will visit him too or at least send him an annual postcard!!

Thank you for your kind comment and the spelling has now been corrected.
Many thanks

I visited the V&A Museum of Childhood yesterday (26th June) to the that The Eagle Slayer statue is no longer there. The very helpful lady at the information desk advised me that it is out on loan to the Coalbrookdale Museum of Iron that recently re-opened.