The first Friday Late of 2014, ‘Sound It Out’, saw an incredible 5812 visitors to the Museum to experience a night dedicated to the exploration of music’s relationship to technology – from analogue to digital, from live streaming to digital manipulation.

A large part of the evening’s success, no doubt, was the involvement of Boiler Room. Showcasing the most exciting new electronic music scene via the world’s largest online music platform, Boiler Room has become a global phenomenon.
Here, Boiler Room offer up some reflections from the evening as well as presenting videos from three of the performers, Rival Consoles, Eli Keszler & Helm and Steven Warwick, specially recorded from the night.
Enjoy! 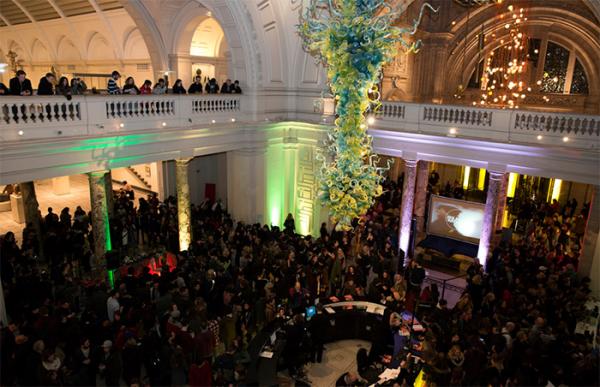 A mooted link-up between the V&A and Boiler Room didn’t seem immediately obvious at first. The former is a true art institution, a World’s Fair-type marvel of design and sculpture with an almost fun fair feel given the broad array of cultural curios housed within; the latter…well, we’re a bunch of rowdy underground electronic music broadcasters. Following a series of Friday Late events showcasing Dalston and Peckham, the V&A sought to do one based on the Internet, given it is regarded as its own entity nowadays. We are the go-to people for curating online space (we guess?), as well as shifting around frequently to inhabit different areas that aren’t traditionally dancefloor spaces, so we took on the unique challenge.
What appeared bizarre in concept felt very natural in the flesh. There’s more of a dialogue going on between the V&A and contemporary culture than people would imagine. The David Bowie and Club to Catwalk exhibitions spring to mind first and foremost. Moreover, dance culture – the salad days of rave in particular – can be seen as a logical progression of many 20th Century avant-garde art movements: the sonic experimentation and use of technology; aesthetic choices from application of light and video through to flyer design and fashion; even the impromptu re-appropriation of space in fields and abandoned warehouses for creative and hedonistic purposes. It can be compared to the methods and attitudes underlying everything from Dada to Surrealism to bricolage to Situationism and Pop Art. We reached out to PAN, a forward-thinking label that dabble heavily in audiovisual manipulation and sonic experiments, to really explore this angle to its fullest.
http://boilerroom.tv/recording/rival-consoles/
A symbol of the peculiar harmony felt across the Friday Late event came while filming PAN label owner Bill Kouligas and Mat Dryhurst map out an ambient soundscape in a room filled with priceless Medieval and Renaissance sculptures. As the two guys sat at their Macbooks diligently pushing the boundaries of 21st Century noise technology, we looked up to see two eerily similar stone figures from the 14th Century – who we later clocked were Saints Ambrose and Gregory – each sat at their books and glaring down upon us, distinctly unamused. It was a creepy case of life imitating art and a pretty hilarious contrast. 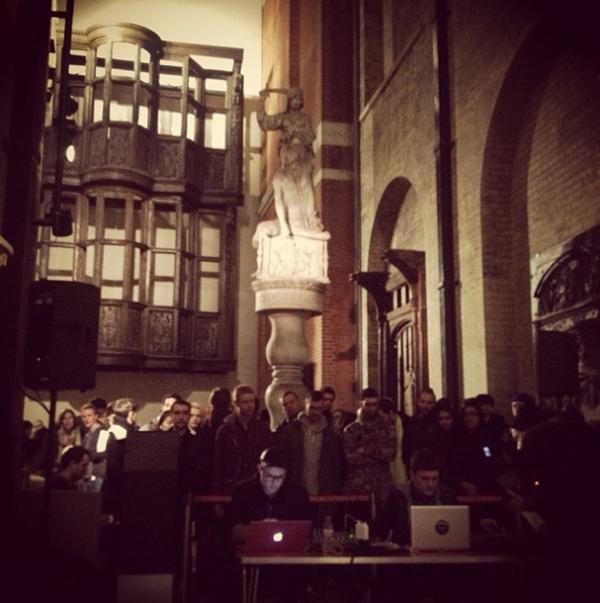 It was rad that many of the artists didn’t just see Boiler Room as a medium for broadcasting their performances, but incorporated us into their installations as collaborators. During that aforementioned opening performance, Mat was directly tweaking the visuals on the camera feed on its way to our producers Truce and Gosia for live broadcast, incorporating snatched fragments of chatroom commentary in real-time. One sardonic remark about the abrasive textures and icy stares feeling akin to Soviet punishment was repurposed as the standalone word ‘Kiev’ which was left to float on screen without context. Across the evening little Easter eggs like this were presented solely to the home audience, a leveller for those whose physical attendance was made impossible by a plethora of factors.
Helm & Eli were similarly embracing of collaboration and improvisation. They had this crazy installation with a series of vibrating metal strings running at 45 degrees from an ornate upper-tier bannister right down to the floor on the level below where they were played by remote control. This arrangement proved quite daunting to our lead cameraman Chris, who was tasked with having to crawl around at the base of the installation, and was sweating over getting caught in the strings and ruining the whole performance. The response we received about this possible nightmare scenario was fitting: ‘Get as close as you want and we’d kind of like it if you got all tangled up. It would make some crazy noises and we could incorporate the chaos into the improvisation.’ I guess we’ll never know how that one would have played out.
http://boilerroom.tv/recording/eli-keszler-helm/
We found the response tremendous, and immensely gratifying. Not all the performances were palatable to our core audience, but people seemed more than willing to dispense with their preconceptions at the door and absorb the unconventional. Speaking of doors: having to operate a ‘one-in, one-out’ policy was totally unexpected; the uptake was amazing. This loose-limbed mass of people dancing to Thris and Bradley’s marathon DJ set in the foyer was a real sight to behold from above, although somewhat less dazzling to navigate while dashing between the wings on foot with bulky camera equipment!
http://boilerroom.tv/recording/heatsick/
Boiler Room’s ethos – at heart, to showcase the best of modern music from intimate live performances and beam it across the world – was proven to be scalable and adaptable: from grimy warehouses right up to posh museums, surrounded by priceless art. There were wider implications, too: in New York you have music featured frequently at the MoMA and Guggenheim; there are plenty of cross-cultural events in Paris; Vienna has the Museumsquartier and Sydney has its Opera House as the nexus of the cities. In London, people have to be almost reminded that we have these amazing gallery settings, and their capacity to remain relevant is as strong as ever. Bringing nearly 6000 people down to the V&A on a Friday night to see that holds true was a total pleasure our end.
Friday Late with MasterCard
An ever-changing, curated programme of live performances, cutting-edge fashion, film, installations, debates, special guests and DJs, with bars, food, and late-night exhibition openings.
contemporary Friday Late music sound