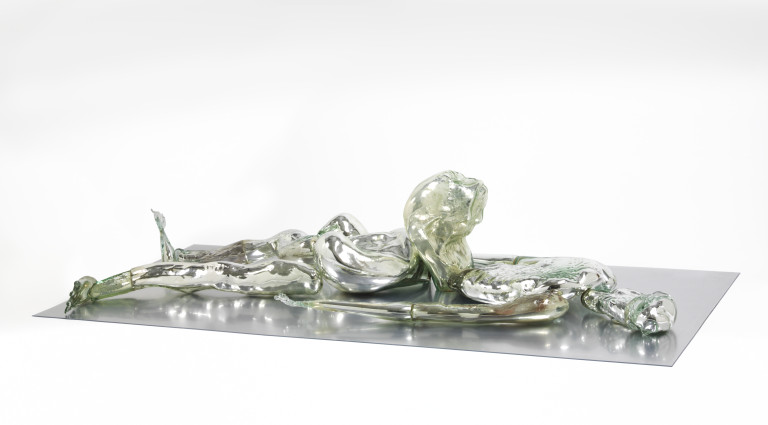 Ralph Day is a postgraduate student in the History of Design at the V&A and the Royal College of Art, and has delivered tours for the monthly V&A LGBTQ Tours programme. Today he shares with his his thoughts and responses to Erwin Eisch’s ‘Head of Narcissus’, on display in Contemporary Glass, Room 129.

‘Dislocated and captivating, ‘Head of Narcissus’ guides us into a mythical scene of queer affections and reflections.

When I began research for the V&A LGBTQ Gallery Tours programme in the summer of 2015, ‘Head of Narcissus’ drew me in. An installation in glass, crafted in 1975 by German artist Erwin Eisch, at its centre lies a body sculpted from eight hand-blown, mirrored glass pieces.

A sad young man and a lonesome cowboy, Narcissus seemed to me a kind of prototypical queer mythological figure. And surely a certain queer-ness registers in Eisch’s installation: a collection of dislocated glass limbs, which look slippery and amphibious, and which somehow spell out a young man’s body.

The story of Narcissus’ life and death is perhaps told most famously by Roman poet Ovid in his fifteen-book epic poem, Metamorphoses. By Ovid’s account, Narcissus is a beautiful, punishing twenty-year old, who rejects the affections of many young men and women. One admiring young man, scorned by Narcissus, reaches out to the gods to ask that Narcissus be dealt the same punishment: that he be denied by the one he loves. Nemesis, goddess of retribution, heeds his call.

And so Narcissus happens upon a body of water, as clear as glass, as gloriously beautiful and untouched as he is:

There as he stooped to quench his thirst another thirst increased. While he is drinking he beholds himself reflected in the mirrored pool—and loves; loves an imagined body which contains no substance, for he deems the mirrored shade a thing of life to love.

Dramatic tension builds: lying still, and statuesque, Narcissus gazes longingly at the image of a beautiful young man in the water. And in this first instance, we see the fascinated lust of one young man for another. But this fascination is fraught with anxiety: no matter how many times Narcissus reaches to the water to kiss the object of his affection, or to grasp his fleeting body, his thirst cannot be quenched. Slowly it dawns on Narcissus that the man he longs for is himself. And so a new kind of queer love story begins, with its own wonders and challenges: ‘The thing that I desire is mine—abundance makes me poor.’ 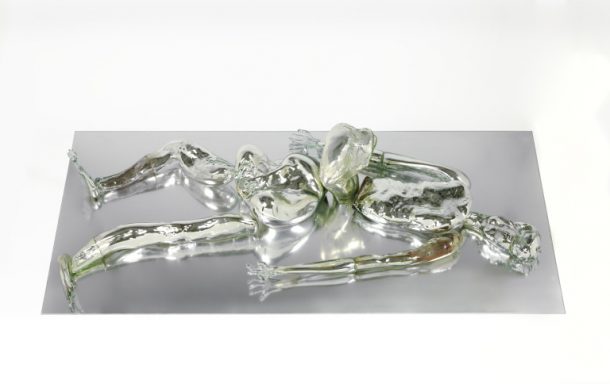 And so Eisch renders a Narcissus narrative in glass. Strewn out on a glass table, this might be a vision of the tortured lover post mortem. It might be a depiction of the glassy pool, the body of water in which he came to see his own body. Then a head rises out of the contorted torso and gazes down at his broken, mirrored body, which might be the head of Narcissus named in the title of the installation. But with a soft, open and sympathetic face, it is carved like a Madonna. Or perhaps it is the face of Echo, Narcissus’ muted admirer in Metamorphoses. With so many possible readings of the scene –  indeed, with so many possibilities for speculation – the installation invites voyeuristic attention. That is, it stirs up our curiosity to investigate the body through looking. 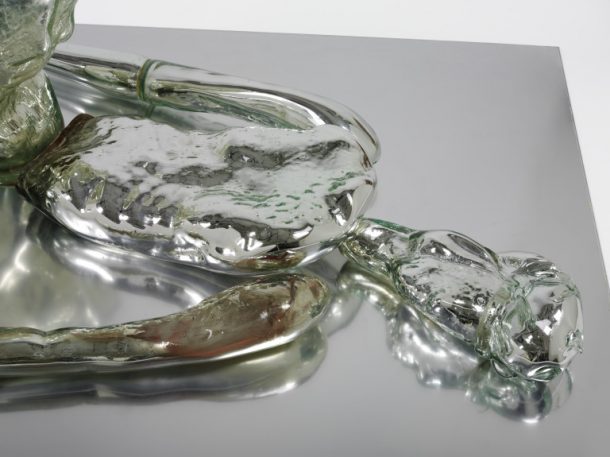 Importantly, ‘Head of Narcissus’ draws us into a scene of queer erotic, and sympathetic, looking. If we believe this to be the tortured body of the star-crossed lover, whose desiring gaze meant his own downfall, here his gaze is disabled and distant – glassy. If Narcissus once rejected the attention of anyone other than himself, as visitors to the Glass gallery we are free to indulge in a vision of the fallen man against his will and outside of his control, without fearing scorn. Narcissus is still the object, but no longer the subject, of curious, fascinated looking. And so this fleeting, tragic, queer love story unravels, and reforms, in the Museum.’