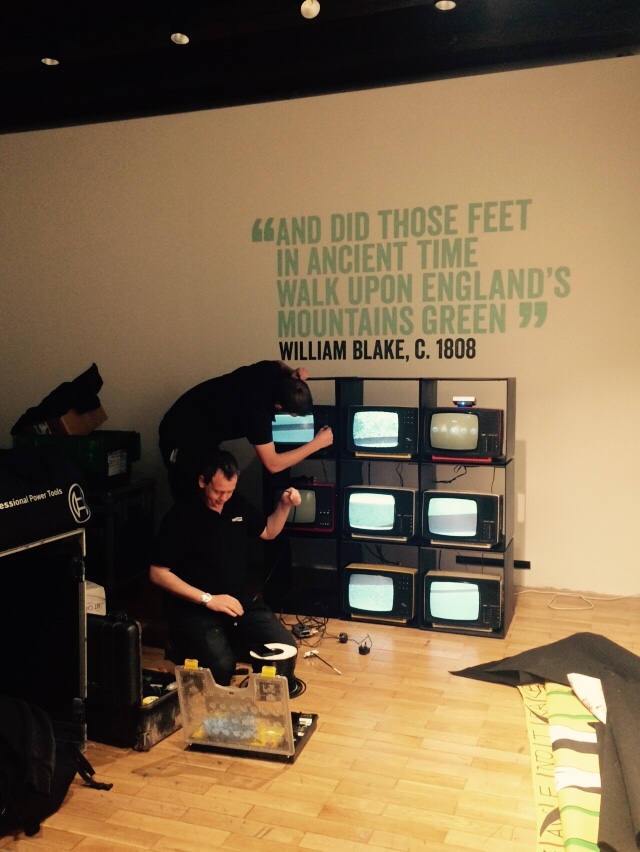 The fourth and final day of install was spent doing final tweaks before the doors opened at 7pm for the official opening of ‘Glastonbury: Land and Legend.’

A final touch was added to the foyer – seven retro Czech TVs were set up to show footage of the rolling countryside on Worthy Farm, as well as archival interviews dating back to the 1980s, which had been conducted with members of the community local to Worthy Farm. 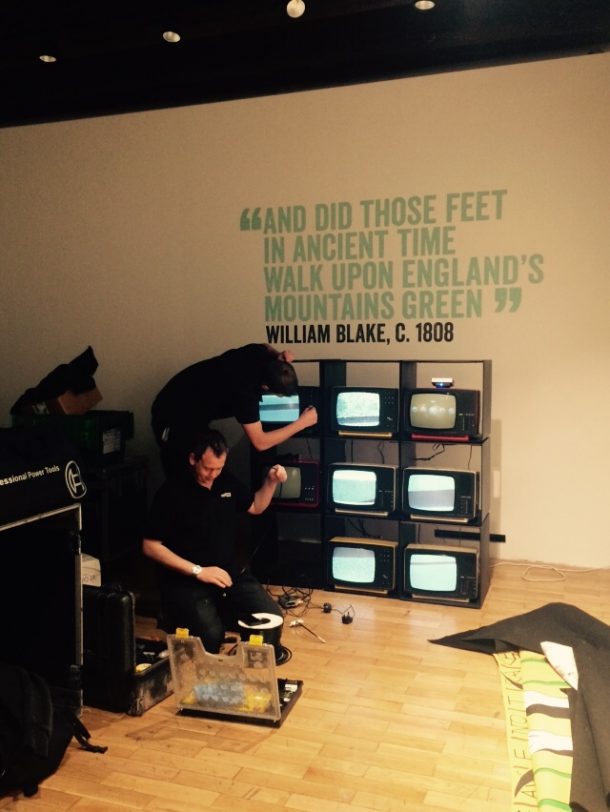 The headphones and handsets, which add the binaural dimension to Gareth Fry’s sound design, were readied in the foyer. 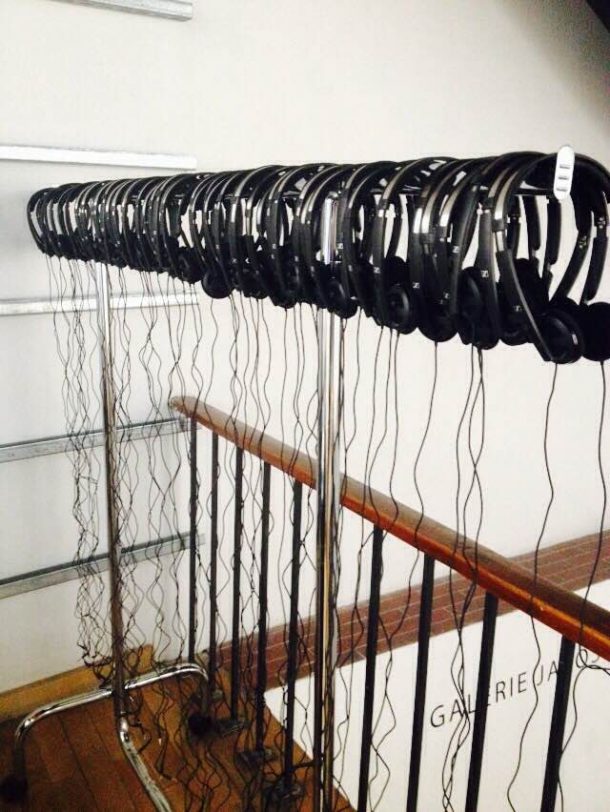 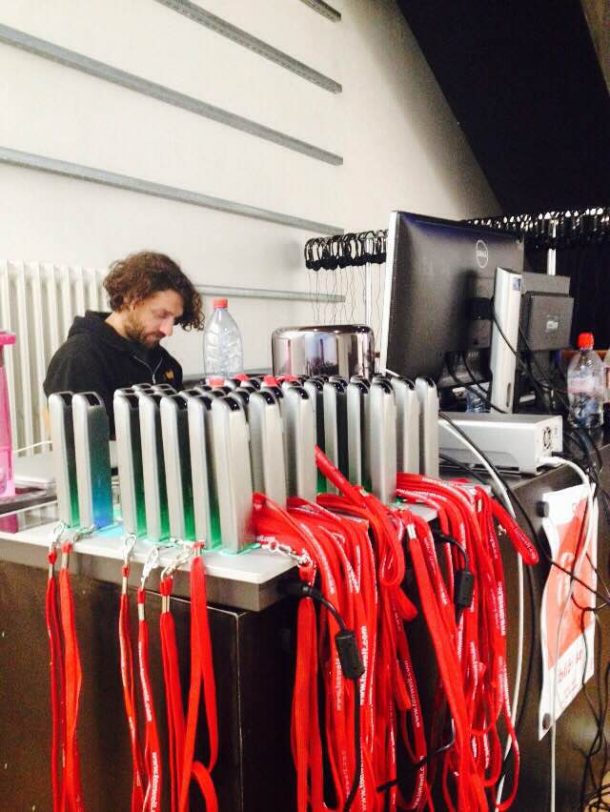 The screens were given a final steam iron! 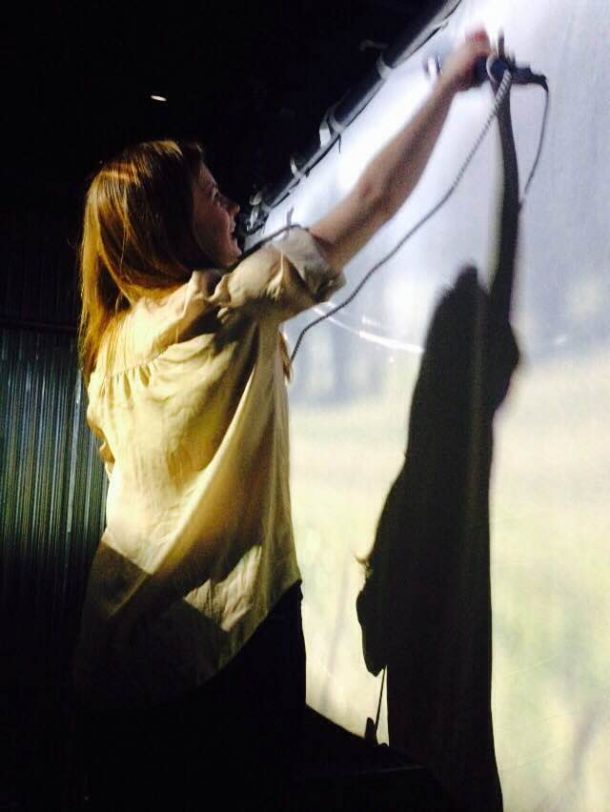 And at 4pm Czech television arrived to interview Kate Bailey, Curator of Scenography in the Theatre and Performance Department at the V&A, about her vision for the project. The report (in Czech!) can be seen here. 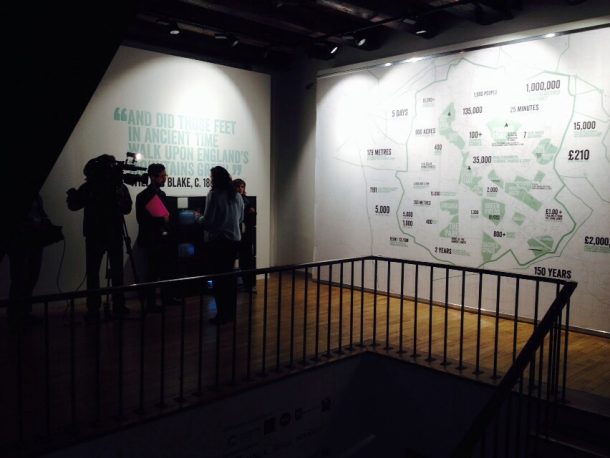 The director of the Jaroslav Fragner Gallery, Dan Merta, welcomed the guests at 7pm and invited Sodja Lotker, Artistic Director of the Prague Quadrennial, to say a few words about her vision for this year’s PQ. Kate Bailey spoke about the collaboration between PQ and the V&A and introduced the concept for the installation as a creative response to the festival, inspired by the three themes of PQ’s Shared Space: Music Weather Politics project. Kate outlined her vision for the project to create an 3-D immersive, scenographic environment, which communicates a new view of the Glastonbury Festival – one which foregrounds the performance of the festival-goer through time and space.

Emily Harris, director of the film installation and Head of Digital Recording in the Theatre and Performance Department at the V&A,  then spoke about the team of people who made the installation happen, thanking the Glastonbury Festival team for their support and generous access; Luke Halls, who masterminded the video design; Gareth Fry, who designed the visceral layer of sound; Warren Chapman who edited over 200 hours of footage down to 20 minutes, creating a beautiful tapestry of material; the film crew who captured the initial footage at the festival in 2015; the gallery staff; the PQ team, and Peter Boott, Oliver Moores and Adam Stockton from Hawthorn, who brought it all together over the four days of install.

The gallery then put on quite a party! Traditional Czech beer was flowing and we were treated to a performance by two Czech bands. The first band, Ty Syčáci, are a trio whose sound might be described as rock meets jazz meets Moravian folklore! See their music video for their song ‘Tomato’ here.

The second band, Mucha, is a female-fronted punk band, who ended the night in style! Their music can be heard here.

‘Glastonbury: Land and Legend’ will be in the Jaroslav Fragner Gallery in Prague until June 28. Thanks to everyone who made it possible!

I have been to Glastonbury a few times over the last twenty five years and was excited to see this installation taking over the Jaroslav Fragner gallery (a fantastic space) in beautiful Praha – and from a V&A museum collaboration too! I have to say though, whilst the sound design was impressive, with individual headsets at the entrance, and some of the video footage was quite beautiful and captivating – there was not really any cohesion to it all, seeming more rather random than immersive or particularly engaging in any way. And I must admit that I was quite underwhelmed. I must go to Glastonbury again perhaps.

Many thanks for your comment. We agree that nothing can beat experiencing the festival itself! Our mission for this specific project was to show everything but the performances. We wanted to capture the atmosphere of the shared festival space, present the work that goes on behind the scenes, explore the landscape and capture festival-goer experience. We continue to work on the project and look forward to developing it further.

Hi there,
I wondered if there is due to be an exhibiton such as this in Somerset at any point in the future?

The last five days at Worthy Farm in Somerset were a midsummer night’s dream. With Friday’s empty slot on the Pyramid Stage remaining a mystery, the festival site was alive...

The third day of install saw the Jaroslav Fragner Gallery completely transformed! These distinctive blue chairs, the iconic image of PQ2015, greeted us from the gallery entrance....

Day 2 passed in an exciting flurry of activity! On the technical side, Oli and Adam installed the projectors and the speakers in preparation for filling the gallery with sound and...