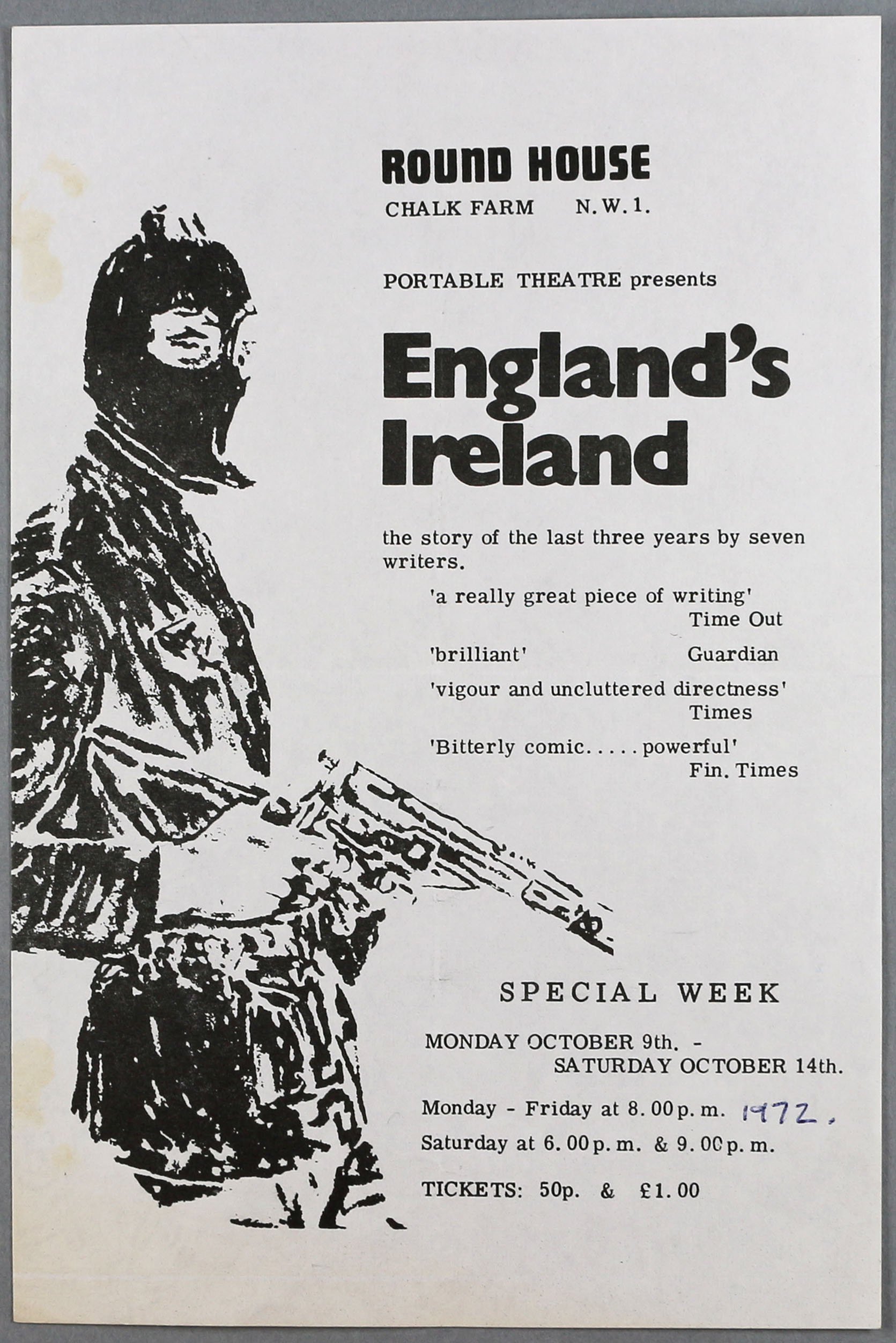 Portable Theatre was a short-lived but influential company founded by David Hare and Tony Bicât in 1968. The company – named after the then ubiquitous ‘portable’ radio – was established as first and foremost a nomadic entity. Whilst touring was an economic necessity for many of the theatre companies emerging from the 1960s counterculture, Portable’s commitment to touring was central to its desire to perform new work in non-theatre venues and, in so doing, to reach new audiences and distance itself from the staging conventions of building-based theatre. The company was one of the first of the new fringe companies to tour beyond London and metropolitan areas; it was also, in two respects, a writer’s theatre: it commissioned new writing (the play-text was the foundation of Portable’s creative process) and it produced a number of plays, especially early on, about famous writers (for example, Strindberg, Kafka and Blake). In its early days, Portable’s potential to be mobile, intimate, literary and broad in appeal were distinctive characteristics that won it approval (and funding) from the Arts Council, which regarded the company as crucial to the burgeoning ecology of British new writing.

In researching the company, there is a wealth of documentation available in the V&A’s Theatre and Performance Archive, ranging from the records of individual theatres that hosted Portable on tour to the voluminous minutes and memoranda, budget applications, weekly returns, internal reports and personal correspondence stored in the vast and labyrinthine Arts Council files. Historical archives may appear to set in place a record of the past with a certain objectivity but in fact they offer an always partial representation of that past, thereby setting terms for the scrutiny of that representation and the kind of historical perspectives that the documentation makes possible. Looking through the Arts Council files, in particular, gives an insight into the theatrical and aesthetic priorities of Portable, the extent of its touring, the size of its audiences at each venue, and the sometimes fractious relationship of the company with its funding body. All of this is incredibly useful information for the researcher because it situates the company within the lived realities, wider cultural debates, and institutional tensions of the time.

Focusing in particular on the Arts Council material, what emerges from the correspondence is a strong sense of the transformation in Portable’s self-image over the years of its existence: the company started out performing pared-down pieces in smaller venues (university campuses, rock concerts, church halls) but, as time passed, it sought to play larger spaces as its directors tired of what they perceived to be the insular fringe network. However, the funding structures of the Arts Council placed limits on the company’s ambition, especially its attempt to keep risk-taking at the centre of its artistic strategy. Increases in Arts Council funding early on enabled the directors to commission playwrights including Howard Brenton and Snoo Wilson, who both joined the company in 1969, but the directors’ frustration with both the limited subsidy and the Arts Council’s seeming preference for building-based theatre is often laid bare in the correspondence. With the arrival of Brenton and Wilson, Portable intensified its engagement with topical, often shocking, subject matter in a string of controversial productions including Brenton’s extraordinary meditation on the serial killer John Christie, Christie in Love, which won the John Whiting Award in 1969. By 1971, the group had three pieces showing at the Edinburgh Fringe Festival, all of them offering an incendiary response to contemporary culture: Chris Wilkinson’s Plays for Rubber Go-Go Girls, the group-written Lay By, and Wilson’s Blowjob. By the early 1970s, however, the company was mired in debt and it eventually disintegrated as a result of increased administrative and financial pressures, and the evolving creative ambitions of its personnel. Archival research opens up a precarious bridge between past and present, allowing for a reassessment of theatre’s legacy and influence. In respect of Portable, the company extended new opportunities for writers and proved there was an audience for new work and touring. Portable’s big collaborative shows Lay By and England’s Ireland laid the foundations for Hare and Brenton’s later co-written Brassneck (1973), arguably the first ‘state of the nation’ play of the 1970s, and Pravda (1985). Indeed, Brenton’s much more recent work at the Globe Theatre (such as In Extremis (2007) and Anne Boleyn (2010)) bears more than a trace of Portable’s theatrical panache. Portable’s distinguished alumni of actors include Maurice Colbourne, Brian Croucher, Paul Freeman, William Hoyland, Sue Johnston and Colin McCormack. The company also influenced the genesis of major theatre groups that rose to prominence in the 1970s, including Joint Stock and Freehold. In its endeavour to create a theatre of visceral provocation, Portable Theatre resurrected an almost Artaudian strain of modernist experimental performance shaped, crucially, by the 1960s counterculture, the political disillusionment of the early 1970s, and the literary predilections of the English theatre. As such, it remains one of the most important and pugnacious new writing companies in modern British theatre history.

Chris Megson is Reader in Drama and Theatre at Royal Holloway, University of London. His research on Portable Theatre is published in British Theatre Companies 1965-1979, edited by John Bull (London: Bloomsbury Methuen Drama, 2016). This book emerges from a joint research project conducted by the V&A Museum and the University of Reading called ‘“Giving Voice to the Nation”: The Arts Council of Great Britain and the Development of Theatre and Performance in Britain 1945-1995’; this five-year project, funded by the Arts and Humanities Research Council (AHRC), was led by Professor John Bull, Dr Kate Dorney, and Professor Graham Saunders. You can listen to a podcast about the ‘Giving Voice’ project here.

The catalogue to the archive of the Arts Council of Great Britain is available via the V&A Museum website.