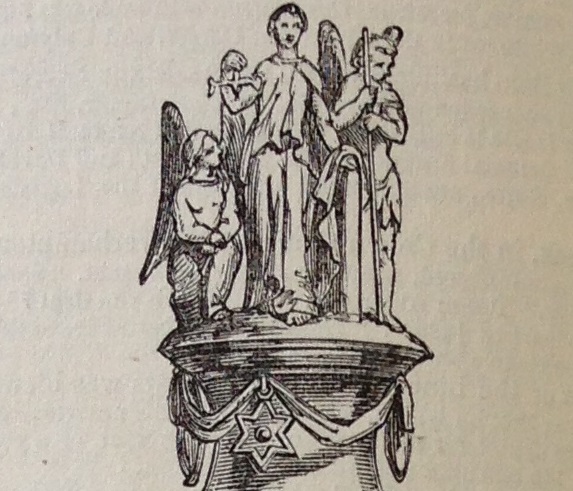 Dr George Swiney (c.1786-1844) seems to have developed some quirky behaviours in later life; fittingly, perhaps, his Edinburgh University MD thesis had been entitled De Insania [On Madness]. According to the obituary published in The Gentleman’s Magazine (July, 1841)

He lived in the greatest seclusion, not going out of doors more than five or six times during an entire year. He had not shaved for the last two years, and his beard extended nearly to his waist. He was always most abstemious, but during the last few months, notwithstanding the entreaties of his housekeeper, he would scarcely partake of any food, and for the last month he peremptorily refused to allow the slighted nourishment to pass his lips, excepting small quantities of cider and water.

Initial press reports that Swiney had died of voluntary starvation were quickly scotched; a post-mortem revealed heart disease as the cause. His funeral, however, was noteworthy for the fact that the coffin was covered with yellow cloth; in addition, a yellow velvet pall was thrown over it after the coffin was carried out to the street. Three female children, dressed in white, with straw bonnets on their heads, processed behind. This unusual cortege attracted such a large crowd of onlookers that a police presence was required to marshal the event (Illustrated London News, 3 February 1844). Had curiosity not got the better of them sooner, it would probably not have surprised the officers of the Society of Arts that this Dr Swiney was connected with the mysterious elderly gentleman who had deposited, in 1831, a parcel with the Secretary, Dr Arthur Akin, instructing him not to open it until he had received further instructions (Illustrated London News, 6 April 1850).(1)

It transpired that the parcel contained a copy of Dr Swiney’s will (he deposited another with the British Museum) in which he left the Society £5000 to endow an essay prize on the theme of ‘Improvements in Agriculture’, which would be awarded every five years on the anniversary of his death; the winner would receive a silver cup (or goblet), to the value of £100, containing one hundred guineas. The officers learned subsequently that by a codicil Swiney had modified the original legacy and that the Society was directed now to award the prize to ‘the author of the best published essay on Jurisprudence’, which would be judged by members of the Society and Fellows of the College of Physicians together with – an unusual twist that was conveniently overlooked – their wives.

Prior to the award of the inaugural Swiney prize, the Society launched an open competition (with a £20 prize) for the best design for a cup; however, none of the numerous submissions were considered acceptable. It then resorted to begging for a suitable design but to no avail. Finally, it approached Daniel Maclise, R.A., directly, who accepted the commission.

The author of an essay in The Journal of Design and Manufactures (1851), a periodical edited by Henry Cole and Richard Redgrave, both of whom would be the driving forces behind the new South Kensington Museum, used the tangled story of the cup’s execution as ‘a sermon on the difficulties of connecting art and manufacture, which at present exist in this country’.

The problem was that for all the beauty and grandeur of his design, which was apparently inspired by a cup by the Nuremberg goldsmith Wenzel Jamnitzer, Maclise failed to take into account the practical limitations of the goldsmith’s art, particularly in respect of the costs necessary for its production and manufacture. The inevitable result was an unhappy compromise: ‘the size of the original design [was] reduced by half, a fatal step to the realisation of the finest portion of the design, the engraving of the court of justice round the body of the goblet, and detrimental, more or less, to all parts of it, especially to the surmounting group on the cover’. Furthermore:

The position of Messrs. Garrard is a guarantee that every justice has been done to the execution of the work, as far as the circumstances allowed; but it is clear that the question of price has fettered them, and hardly permitted them fair play … we are made sensible how important it is that the designer should either model himself or be incessantly at the elbow of the workman. Had this been so, we think Mr. Maclise would have modified the grouping, and have given it a more architectonic character, in accordance with its knoblike purpose.

The diaries of Henry Cole, not yet the V&A’s first Director but a council member of the Society of Arts, preserve tantalising traces of his involvement in the cup’s commission and manufacture. It seems that he acted as a go-between: liaising with Maclise, conveying designs to Garrard & Co. (the V&A’s Archive of Art and Design  holds the Garrard ledgers containing client accounts, but unfortunately the ledger covering 1849-50 is not among them), negotiating prices and instructing the engraver:

5 March 1849: Maclise called, with him to Garrards

9 May: Soc. of Arts: Speer and Maclise Goblet

John Ayrton Paris and John Samuel Martin Fonblanque, co-authors of Medical Jurisprudence (1823), were the first recipients of the prize. Consequently, two cups were made, each containing fifty guineas. A correspondent for the Medical Times, 4 November 1848, criticised the choice of winning publication ‘as it has necessarily no notice of the many recent and most important in the practical teachings of Medical Jurisprudence’.

Maclise’s design, which was exhibited at the New York Exhibition, 1853-54, and the Paris Universal Exhibition, 1867, continued to be reproduced until 1919.

(1) The version given in A History of the Society of Arts (1913) differs slightly from the ILN account inasmuch as the identity of the benefactor was known to the Society but not his address, which the Secretary was unable to trace. Consequently,  the will was handed to the Society’s honorary solicitor, William Tooke, for safekeeping.