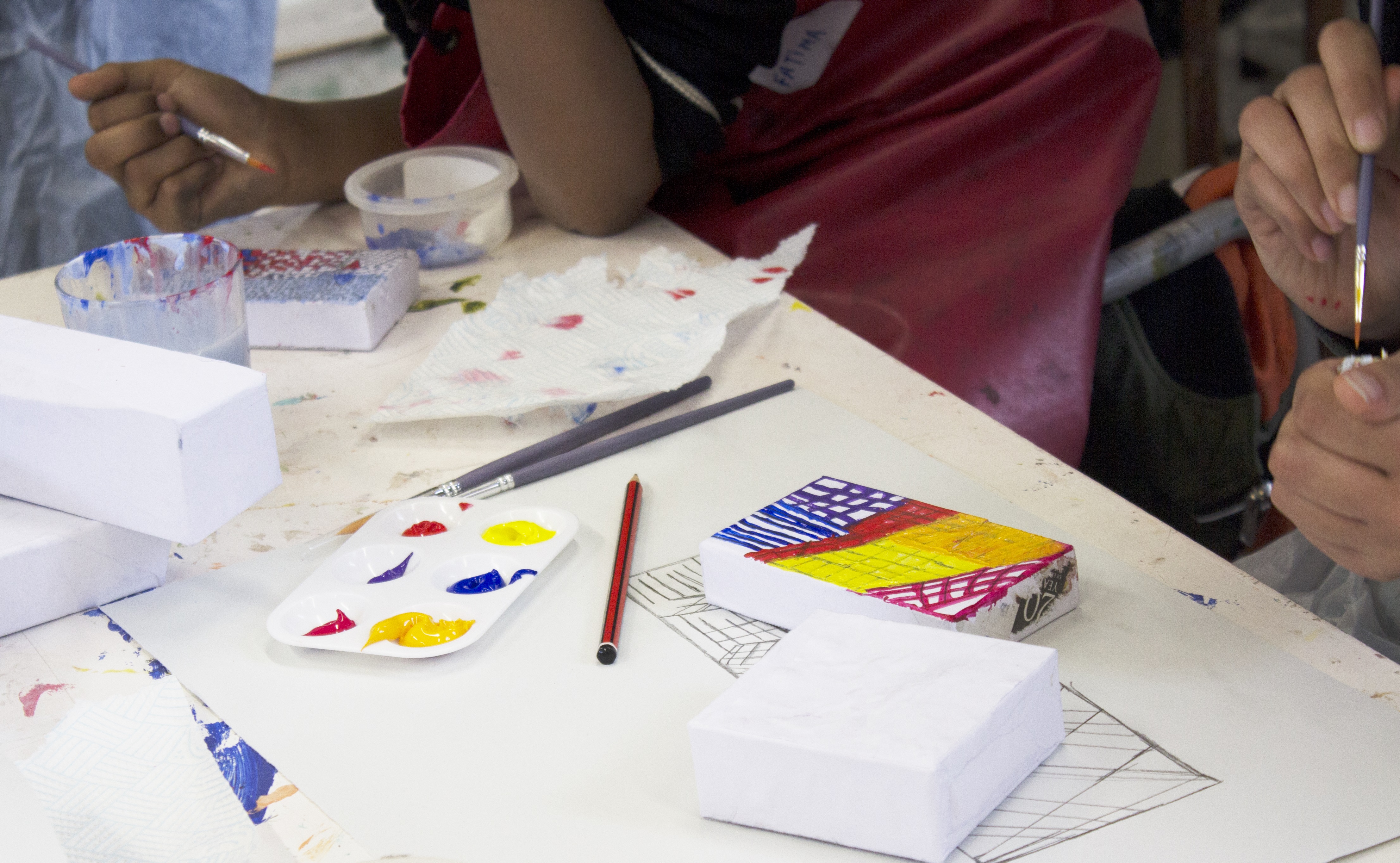 A collaborative project with the V&A’s Adult Communities Team

The National Lottery Funded ‘Retracing Ribeiro’ project celebrates the legacy of the Indian painter – my father – Lancelot Ribeiro (1933-2010). As part of this, the V&A held an outreach programme where the project’s Creative Director, Emily Phillips, with ceramics artist Mürüde Mehmet, sought to utilise different aspects of my father’s life, history and art to inspire participants, stimulated by a mobile exhibition drawn from the Ribeiro Archive.

At East London’s Rosetta Arts Centre, pre-GCSE children were shown my father’s maquettes that he had painted on old medicine boxes. Utilising recyclable objects, the aim was to not only instil in these young people an appreciation of their environment, but also – as in the vein of my father – a sense that anything could serve as a canvas to which they could apply a stylistic touch of their own. In the quiet of the room, it was clear that the group had embraced this task with some pride. 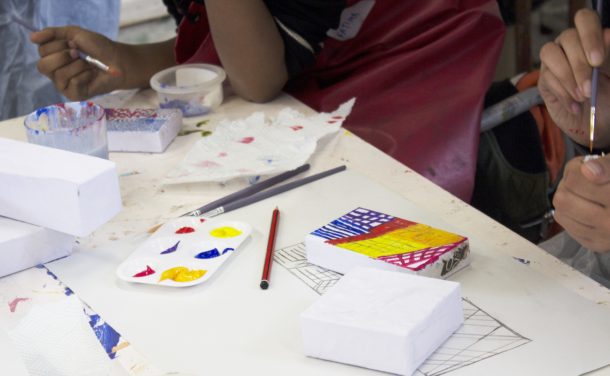 At the Bromley by Bow Community Centre, my Dad’s oil townscapes, which bear the influence Goa’s landscape had for him, were used as a stimulus for the ‘Young@Art’ Over 50s group. The objective was to carve and paint ceramic tiles of places or buildings that had a personal resonance for them while acting as a reminiscence catalyst to draw out their stories.

One lady revealed how she had been a child evacuee, “just told to turn up at either Euston or Kings Cross” with no idea of where they were being sent. Gesturing outside, she told me bombs were falling everywhere. Another, carving out Bow Church, told us of her friend’s wartime wedding there, in a dress made from parachute silk. A man, about to paint a portrait, took from his pocket a well-thumbed treasured photograph of his first girlfriend, taken in the fifties. 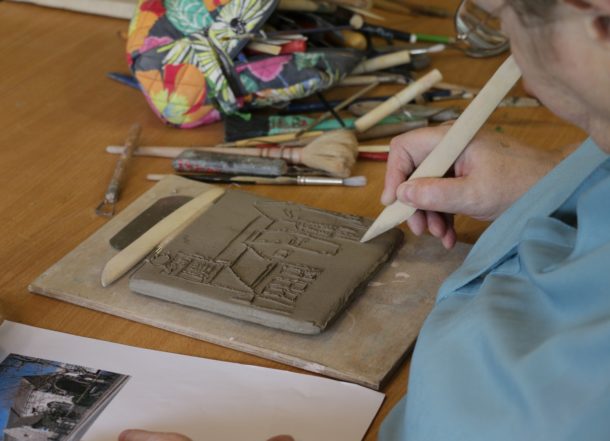 The Social Care group were tasked with painting portraits on ceramic plates, referring to their choice of my father’s series of ‘Heads’ that aligned with their sense of identity. Several opted for the only realistic oil portrait my Dad ever did in 1963 – that of my Mum. 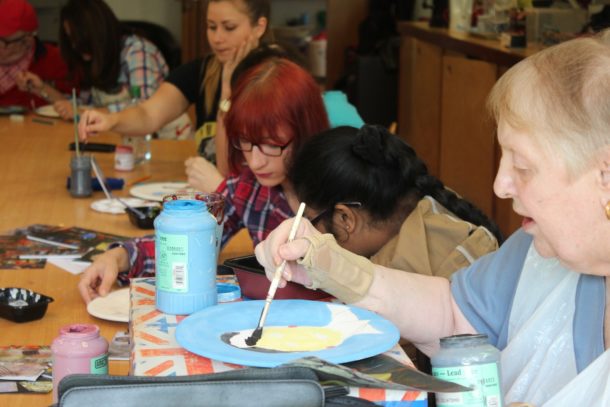 For our ‘After Adoption’ sessions aimed at families, Emily had taken her inspiration from book covers my father had designed, providing an array of carefully-selected vintage books that were intended to spark dialogue between parents – who would perhaps be enticed down memory lane – with children who were given the choice to pick out books that were a mark of their individuality. One boy had taken lines from a Shakespeare play to illustrate his, revealing his interest in the theatre. Several chose to do self-portraits. A family of five found they had hidden artistic talent. 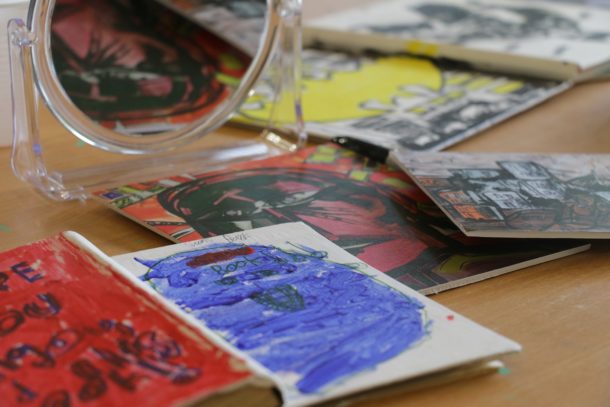 Our sessions with the ‘Grandmas That Brunch Club’ who – like my father – left the subcontinent for a new life in Britain – were tasked with painting self-portraits on silk. For many, this was one of the rare outings away from home and a chance to express their voice collectively and share their experiences with us. 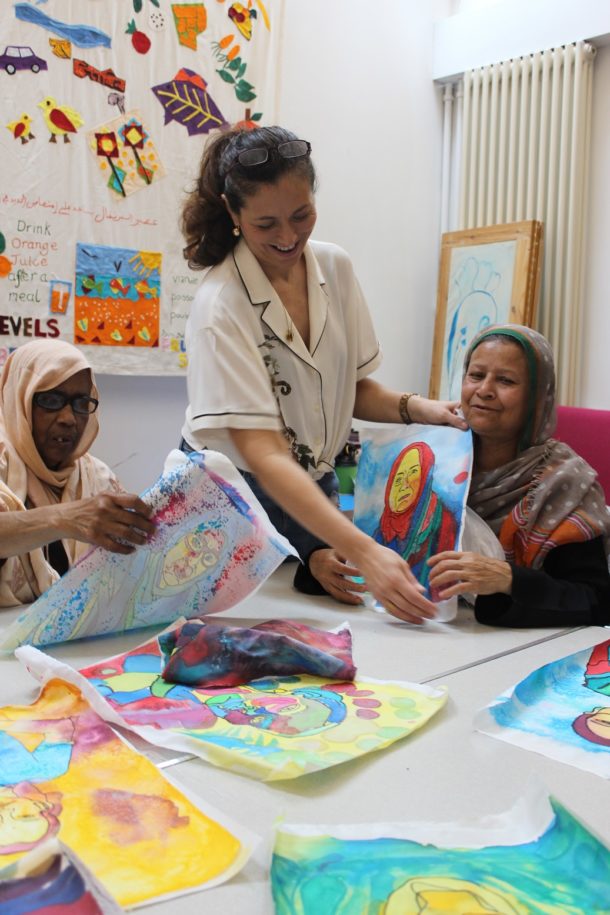 Our final workshop was with NOVA’s Grenfell families group. Emily had selected my father’s mystical paintings entitled ‘Divinities’ as an activity the families could do as one. Producing these larger-than-life paintings, the atmosphere in the room was Carnivalesque and they “enjoyed doing something together and having fun”. 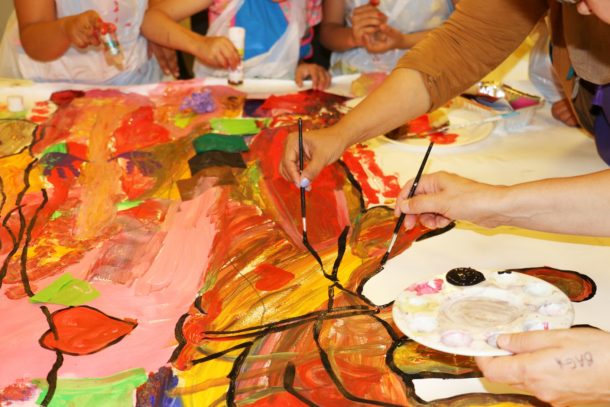 Throughout these workshops, it has been the individuals we have encountered and their stories that have moved us the most with a sense best summed up by one who said “made me feel more of a person”. I doubt these groups would have had such close access to my Dad’s life and work without them and it was with some emotion I watched individuals take Ribeiro on a journey of their own.

An exhibition of the work of our community groups, inspired by Ribeiro’s life and art, will be on at the Bloomsbury Festival (18-22 October 2017). See www.lanceribeiro.co.uk