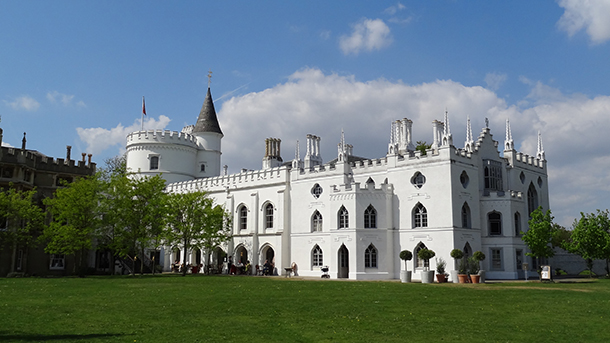 Serendipity: the faculty of making happy and unexpected discoveries by accident       (from the Concise Oxford Dictionary)

One of the great pleasures of volunteering at the V&A is that the more you learn about the museum’s collection, the more unexpected links you find that connect different objects, artists and designers. How delightful then, on a completely happenstance visit to Strawberry Hill, to find a rather wonderful coincidence in the home of Horace Walpole, the man who coined the term ‘serendipity’.

I’m currently training as a V&A British Galleries Guide, so when an urgent delivery took me to Twickenham in West London, I thought I would combine the errand with a visit to nearby Strawberry Hill and use the opportunity to learn more about it’s creator, Horace Walpole ( 1717-1797). Walpole  was from a wealthy, aristocratic family: the youngest son of Britain’s first Prime Minister and famous in his own right as a writer and collector. His country residence, Strawberry Hill, was both a celebration of the 18th Medeival Revival style that he pioneered and also an 18th century proto-museum showcasing his extraordinary art collection.

The V&A has a whole case of objects in Room 118a on level 4 of the British Galleries dedicated to Horace Walpole as a collector. Treasures within include furniture inspired by Gothic architecture and an extraordinary Grinling Gibbons lime-wood cravat that Walpole, according to his diaries, occassionally wore. V&A visitors can also get an idea of  the extraordinary theatrical style of Stawberry Hill’s interiors by visiting Room 122d on Level 4 of the British Galleries. Displayed here is a whole room, the Thomas Barrett’s Study from Lee Priory,  the Kent mansion  that Barrett modelled on Strawberry Hill and that Walpole himself described as

…. the quintessence of Gothic taste, exquisitely executed …… a child of Strawberry, prettier than it’s parent.

The ‘parent’ house wasn’t open to the public on that day I dropped by but I was fortunately able to join a special tour for ‘Friends’, led by Art Historian Alison Meek, highlighting a selection of Walpole’s collection of paintings. Although the original house contents were sold off in 1842 and are now spread across museums and collections around the world, the  Strawberry Hill Trust are slowly re-furnishing the house by borrowing back some of the originals and by commissioning copies. One of the most recent additions is a high quality facsimile of a 15th century oil painting of ‘The Family of Henry VII with St George and the Dragon’, which hangs on the wall of the Gothic staircase in the heart of the house . The original painting, owned by Walpole, is now in the Royal Collection and on display at Hampton Court, having been acquired by Queen Victoria after the contents of Strawberry Hill were dispersed.

Uncannily, the painting was one I had seen for the first time just a few hours previously, not while reading about Walpole or Strawberry Hill but whilst trying to find out bit more about Henry Tudor, the subject of Pietro Torrigiano’s 1509 Portrait bust of King Henry VII  (Museum number A.49-1935 British Galleries, room 58e, case 8)

When I recounted this to the tour group,  I learned that Strawberry Hill was ever the place for such pleasant coincidences. It was Horace Walpole himself who in 1754  coined the term serendipity, referencing a Persian fairy tale, The Three Princes of Serendip  in which the heroes were “always making discoveries, by accidents and sagacity, of things which they were not in quest of”.

1. Walpole’s  Gothic villa  ‘ Strawberry Hill’ is open to the public from Easter to October and for special events thoughout the year.
http://www.strawberryhillhouse.org.uk/

Whilst researching busts of James Gibbs (architect) by Rysbrack I came across mention of a bust of Henry VII by Torregiano in the Star Chamber at Strawberry Hill in Letters of HW pub 1844.and lot 96 13 May 1842 bought by Algernon Lord Prudhoe – Serendipity

Strawberry Hill House now have an app where you can view all of the rooms virtually in lavish detail. Furthermore, each of the objects in the exhibition can be examined in greater detail in each of these rooms. The links for the two apps (iPhone/iPad and Android) are at

and for the google app
http://bit.ly/2DasNgG