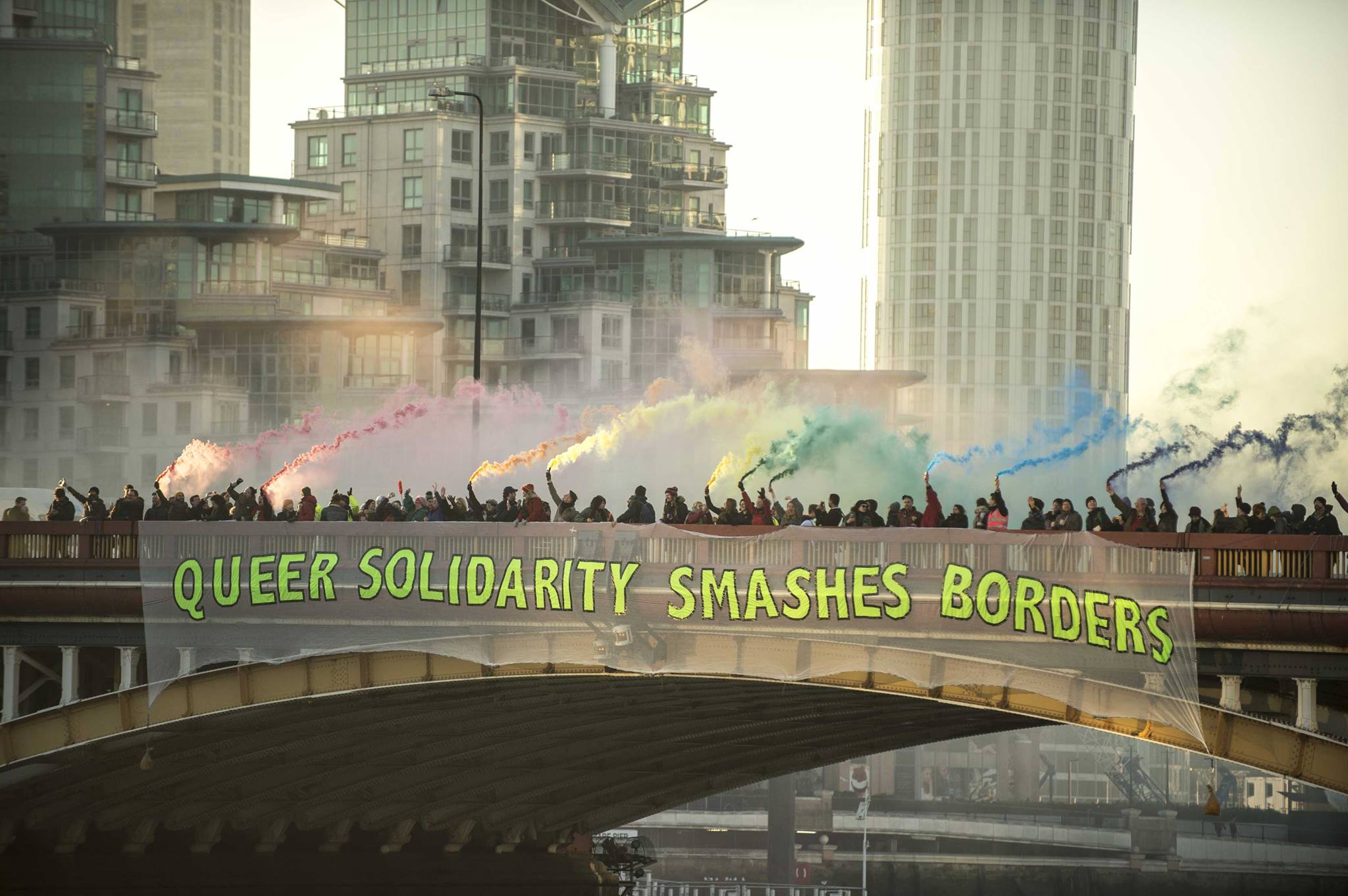 The Speakers Corner at the Out for Revolution Friday Late raised the question of:

How far have we come in the fight for equality and what are the issues facing the global LGBTQ community now?

Visitors were able to hear how a variety of activists continue to challenge contemporary laws and social issues – and how they can get involved. Talks included: speakers who lived through the passing of the Sexual Offences Act 1967; consideration of the colonial legacy of the UK’s anti-LGBTQ laws; the interplay of society, politics and the media; ‘LGBTQ rights = Human Rights’; and the resources and approaches needed to successfully care for intersectional communities.

In this post we share further details of the evening’s speakers and details of how you can support their work.

Host for the evening was Dan Glass (@DanGlassUK) – activist, LGBTQI+ tour guide, performer, writer and generally one of the busiest people I know. Dan is involved with numerous groups and campaigns, perhaps most fitting given the Museum venue, Dan is one of the activists who have set up Queer Tours of London and is involved in the campaign calling for London to have its first dedicated museum of LGBTQ+ history.

Lesbian and Gays support the Migrants

Carl joined us, representing Lesbians and Gays Support the Migrants. 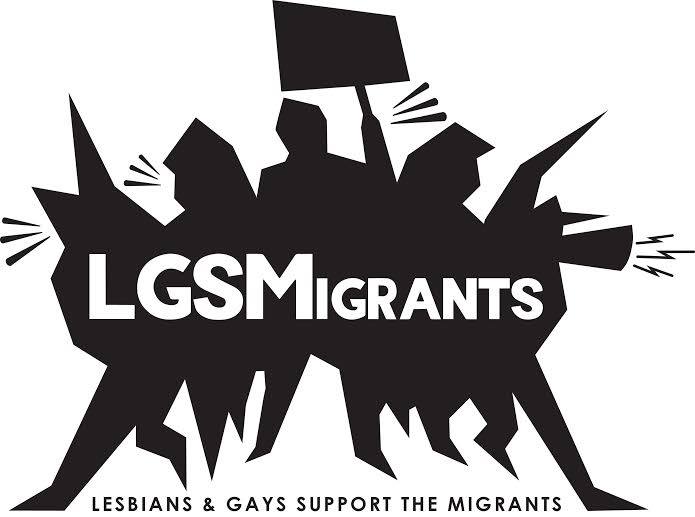 A movement to challenge the racism, xenophobia, islamophobia and homophobia that we see from the media and many politicians. We want to disrupt the prevailing right-wing narrative around migrants through creative discourse intervention, and to provide practical solidarity and support to self-organised migrant groups. We will be planning mass actions to protest UK border enforcement and fundraising to support migrants.

Their name is a deliberate reference to Lesbians and Gays Support the Miners, a group of queer activists in the 80’s who formed in support of the striking miners.

The work done by the original LGSM in the 80s and this year, following the success of the film Pride, is a direct inspiration for setting up this group. Our intention is to use the name as a way to build on this part of our shared history as queer people extending solidarity and standing with other marginalised people.

This group is inclusive of all sexualities and gender identities. The re-formed Lesbians and Gays Support the Miners of 2014-2015 has included people who did not identify as lesbian or gay, but also come from across the queer spectrum. In a similar vein, this group wants to utilise the recognisable and historical message in the name, while remaining inclusive of the diversity of the queer community in our actions and statements. All LGBTQ+ people are encouraged to get involved.

Matt Beard, Executive Director of All Out, spoke about the international work this non-profit organisation carries out and supports. 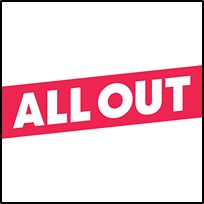 Mission: In 71 countries it is a crime to be gay; in 10 it can cost you your life. All Out is building a world where no person will have to sacrifice their family or freedom, safety or dignity, because of who they are or who they love.

By mobilising thousands of people globally and working closely with local organisations and activists, we use creative tactics – online and offline – to draw attention to the push for equality for lesbian, gay, bi and trans (LGBT) people.

When a moment of crisis or opportunity comes up – an anti-gay law going to a vote, a crackdown on a Pride march, a company making a wrong turn for trans rights –, All Out uses technology to give our members inspiring ways to take action.

Chris Barlow spoke on behalf of Opening Doors London, which is the biggest charity providing information and support services with and for older Lesbian, Gay, Bisexual and Trans* people in the UK. As their website explains:

Opening Doors London aims to specifically meet the needs of the older LGBT* (Lesbian, Gay, Bisexual and Trans*) community and is aimed at people who identify as LGBT* and are over the age of 50. We have members from across London and beyond.

The aims of Opening Doors London are to develop services for the older LGBT* community that combat isolation through the provision of:

Opening Doors London runs an LGBT* befriending scheme for older LGBT* people who are feeling isolated and lonely, specifically from the LGBT* community. The scheme matches a volunteer with an older person, for regular social contact. It aims to reduce the stress of loneliness and isolation, increase people’s confidence, and enable members to maintain their independence. The Befriending Scheme now operates in every London borough.

Aderonke spoke to us about the work of African Rainbow Family (ARF), a non-for-profit organisation that support lesbian, gay, bisexual, transgender intersexual and queer (LGBTIQ) people of African heritage. It was established in the wake of the toxic and draconian anti-gay laws, persecutions and environment which seek to criminalise LGBTIQs for the preference of whom they choose to love.

Didi represented Queer Strike, a group who describe themselves as:

‘Grassroots, multi-racial, lesbian, bi, trans, queer women’s group campaigning for: our economic, legal and human rights; for payment for caring work, taking the money away from military budgets (over one trillion a year) for the essentials of life, and so that women everywhere can afford to make the sexual and other choices we want. We make visible LBTQ women’s caring and survival work for our families and communities, which is often hidden because we can’t be out.

We are from different backgrounds and ages: single mums, sex workers, with disabilities, housewives, immigrants, students . . . from villages and cities, in Europe and countries of the South. Formerly Lesbian Bi Trans Queer in the Global Women’s Strike and before then we were Wages Due Lesbians from 1975.’ 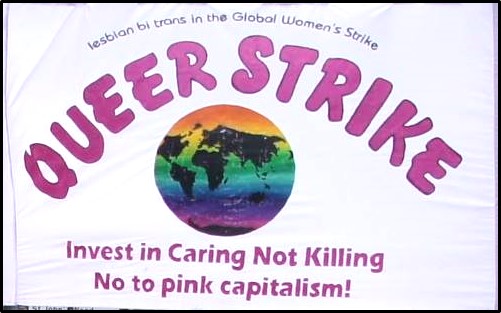 ‘Our vision at Trans Media Watch is a Britain in which the portrayal of trans people and their lives in the media is fair, respectful and accurate. We want to see an end to the prejudice, bigotry and hate routinely directed at trans people and we want the media to play its role – no longer fuelling these things. We are more than happy to work with any representative of any media organisation to help them do a good job.’ 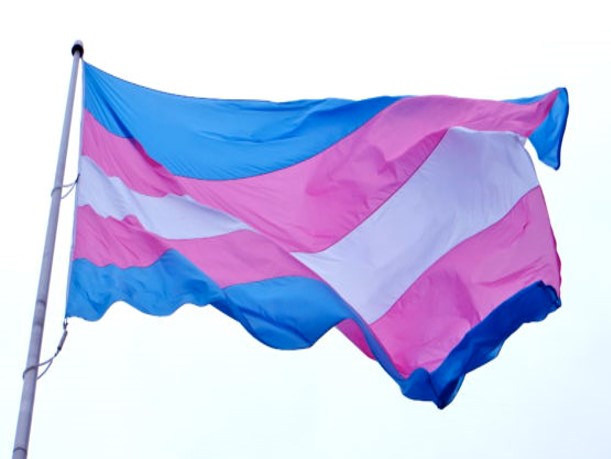 As a global movement of over seven million people, Amnesty International is the world’s largest grassroots human rights organisations.

Laura Carter, Research and Policy Advisor at Amnesty International UK, talked about the variety of LGBTQI-focused work in their mission to ‘protect men, women and children wherever justice, freedom, truth and dignity are denied’.

No matter what your actual or perceived sexual orientation or gender identity, every person on earth should be treated by others and by their governments as equal citizens. But around the world, people are continually persecuted and discriminated against for who they are, and their sexual feelings and consenting behaviour.

We’re working for a world where no one faces discrimination for their sexual orientation or gender identity.

Our LGBTI work takes many forms, including:

Stuart is an artist and gay campaigner who was active in the Gay Liberation Front in the 1970s. With Bette Bourne, he founded the Bloolips gay theatre group. He is the author of Blowing the Lid: Gay Liberation, Sexual Revolution and Radical Queen (Zero Books, 2016).

Journalist and long-term gay activist, former member of  the Gay Liberation Front and, with Denis Lemon, co-founder of Gay News. Andrew is the author (with Gillian E Hanscombe) of Title Fight: The Battle for Gay News (Brilliance Books, 1983); and of Souvenirs of Sirmione: For the Amusement of Mr Anthony Grey (One Roof Press, 2010). Archives recording Andrew’s work are held by the London School of Economics.