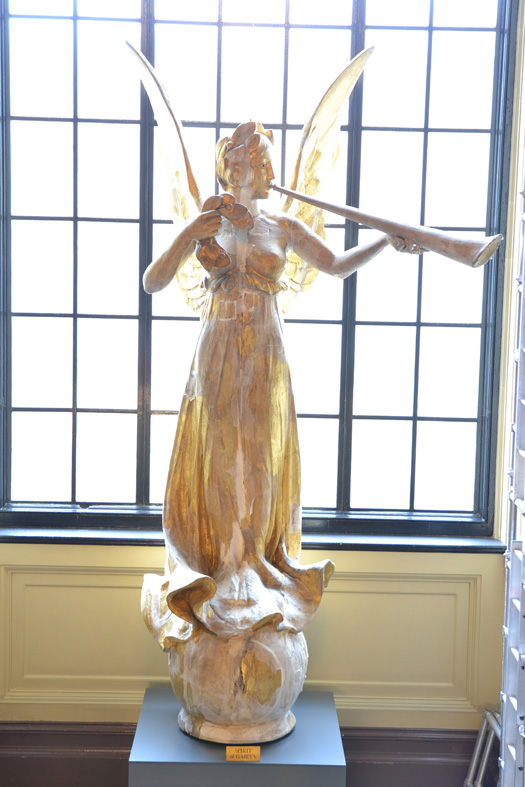 As a team of conservators begin work on restoring the Spirit of Gaiety statue on display at the V&A Museum, Rosie Vizor from the Department of Theatre and Performance uncovers the history of the statue and the theatre on which she stood.

The magnificent Spirit of Gaiety statue has been in the care of the Museum since 1984 but before that she led an interesting life as the guardian angel of the Gaiety Theatre, watching its precarious history unfold. She is currently the focus of an exciting conservation research project to restore the statue to its former glory, but who is the Spirit of Gaiety? In what follows, I delve into the Theatre and Performance archive collections to explore her heritage, asking the question; what did she see in her many years standing proudly atop the Gaiety Theatre’s grand dome?

The Gaiety Theatre, upon which the Spirit of Gaiety stood, was built in 1903 in Aldwych. However, this was not the first theatre in the area to operate under the illustrious Gaiety name. The Strand Music Hall was constructed in 1863 on a site roughly opposite the later Gaiety Theatre and was reopened in 1868 as the original Gaiety Theatre, retaining only the façade of the former building. The lavish auditorium could accommodate 2000 people and gained much success with its burlesques under the management of John Hollingshead. The impresario George Edwardes took over in 1885. His staging of ‘In Town’ in 1892 was one of the earliest examples of musical comedy.

The popularity of this new genre depended, in part, on the beautiful singing and dancing chorus of Gaiety Girls who appeared on stage in bathing attire and the latest fashions. The Gaiety Girls became so famous that wealthy gentlemen, termed ‘Stage Door Johnnies’, would wait outside the stage door after performances, hoping to escort them to dinner. Indeed, Connie Gilchrist, Rosie Boote and several other girls married into the peerage. These ‘creatures of romantic wonder’ were ‘worshipped and adored’, according to Walter Macqueen-Pope in the 1950 article in The Sphere.

The last performance at the original Gaiety Theatre was on 4th July 1903, after which it was demolished due to the Aldwych road widening scheme. However, construction of its replacement was already underway in 1901 and the opening production of The Orchid took place just 4 months later on 26th October 1903. In an article in The Listener, the Gaiety Girl Ruby Miller describes the ‘glittering’ opening night, which was attended by King Edward VII and Queen Alexandra, as something that ‘will stay in my memory for as long as I live’.

Musical Comedy continued to be the staple fare at the new Gaiety and for the next three decades it retained its reputation as a much loved theatre. The building itself was beautiful, designed in the Italian Renaissance style by architects Ernest Runtz and George Ford. Hibbert C. Binney was the artist behind the Spirit of Gaiety figure at the summit of the dome, as well as the sculptures of Music and Dancing which also featured in relief on the building.

In 1939, it was announced that the Theatre was to be demolished for a further road widening scheme. The last performance at the Gaiety was Running Riot on 25th February 1939. The road widening scheme never actually came to fruition and the Gaiety Theatre stood forlorn and derelict for many years, suffering from bomb damage during The Blitz. A glimmer of hope surfaced when the comedy actor Lupino Lane bought the building for an estimated £200,000 in 1946. Despite spending a fortune on restoration works, Lane eventually had to sell up in 1950.

Almost 20 years after the Gaiety Theatre closed, it was finally demolished and the English Electric Company (Citibank House) was constructed on the site. The Spirit of Gaiety was preserved and stood in the well of the Citibank premises until it was presented to the Theatre Museum in 1984. Citibank House was demolished in 2006 and a new hotel opened on the site in 2012.

So, from her stately position on the summit of the dome, the Spirit of Gaiety witnessed the turbulent history of her home, the grand Gaiety Theatre, unfold. She shared in the inherited glamour and success of the musical comedies and burlesques of its ancestors who lived across the road, the Strand Music Hall and the original Gaiety Theatre. She survived the bombing of the Second World War and withstood the 20 years of abandonment as the building battled against the elements. Her hopes were raised with those of Lupino Lane, and subsequently dashed. Thankfully, she was carried to safety during the destruction of the Theatre and stood as an emblem of its former glory in the new Citibank premises. And now, after years of being safely housed at the V&A, we look forward to hearing what the Museum conservators discover beneath the gilded surface layers.

You can read more about the conservation research project into the Spirit of Gaiety here.