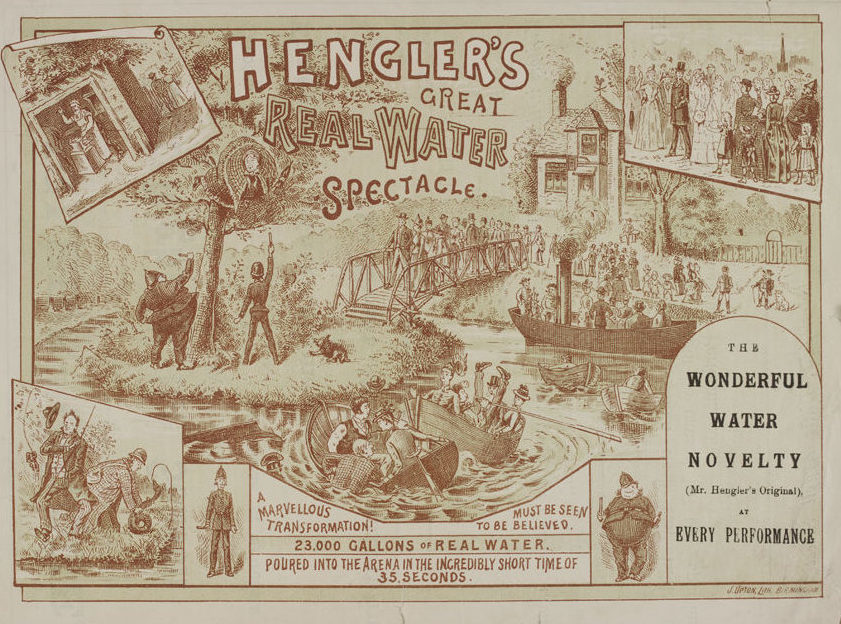 As we approach the 250th anniversary of the founding of modern circus in 2018, in a series of posts Curator for Popular Entertainment, Cathy Haill, will explore aquatic entertainment in the circus.

Circuses are more generally associated with the smell of the sawdust than the waves of the water, but a recent visit to Great Yarmouth circus reminded me that its aquatic second act is a rare continuation of a spectacle that started as a sensation in Victorian circus. At Hengler’s Circus in Argyll Street, near London’s Oxford Circus, the site of the London Palladium, the Christmas treat from 26th December 1890 to 18th April 1891 was Hengler’s Grand Water Pantomime. While pantomime is generally a Christmas event today opening some time in December, 19th century pantomimes opened on Boxing Day and sometimes ran for months.

A Village Wedding, or Tramps Abroad was the grand finale after eleven circus acts including juggling on horseback, performing donkeys and clowning. The Times reviewer, 27th December 1890, described the pantomime as a series of tableaux representing a village wedding, a musical interlude of anvil striking in the village smithy, followed by a Harlequinade featuring a comic chase by two policemen after two thieving tramps. What everyone wanted to see however was the final scene in which the circus ring was transformed into a lake, with characters taking to boats, and real ducks.

Classified advertisements in The Times in January boasted that ‘The Mighty Torrent of Water Rushing into the Ring Is the Sight of London.’ The circus programme noted that the arena was flooded in just 35 seconds by 23,000 gallons of water, but warned its patrons that ‘The Management will not hold itself responsible for any slight damage that might be caused by the splashing of the water during the performance.’ The final scene, illustrated in The Graphic, 10th January, shows two bridges and the policemen chasing one of the tramps diving into the water into which his fellow tramp disguised as an old lady has already landed.

Patrons who liked aquatic spectacle could also have gone to Sanger’s Amphitheatre in Westminster Bridge Road after Boxing Day 1890 to see George Sanger’s Great Water Carnival in a ring flooded by 80,000 gallons of water, featuring steamers and boats and a water harlequinade, with Clown, Pantaloon and Harlequin in a washing tub drawn by geese and swans. Not to be outdone by a rival, Sanger had installed a tank of his own at his circus. He repeated his Water Carnival the following year, and on 26 December 1892 produced the farce and water pantomime The Jockey Club featuring a ‘Grand Cataract of Real Water’ boasting a ‘great fall off the bridge to the lake beneath, capsized boats and submerged occupants.’

Sanger’s rival and the man who introduced this aquatic novelty to London was Albert Hengler, son of the talented equestrian and businessman Charles Hengler, born in 1821, who had established circus buildings in Liverpool, Glasgow, Dublin and Hull as well as London, and had even given a command performance of his circus at Windsor in 1886. After his father’s death 1887, Albert and his brother Fred ran the circuses until Albert bought them from the Trustees in 1892. Demonstrations of swimming and diving into large tanks had been popular theatrical entertainment for several years, but in 1889 while his company performed at Covent Garden Theatre, Hengler adapted his Argyll Street circus to install a water tank and a hydraulically operated ring. His first aquatic spectacle The Ocean Wave ‘a realistic sail on the sea’ opened on Boxing Day 1889. In an interview with The Sketch, 19th December 1894, Albert Hengler put his financial success down to ‘water novelty’ that paid better than anything else he had ever done. He claimed to have dreamed the idea of a swimming show in a flooded circus ring when his father was alive, but his father and uncle had laughed at the notion ‘till their sides ached’:

‘but when my father died, I set to work, with the assistance of Alfred Powell.. and together we produced the water pantomime, which has now been copied by every circus in the world’.

Curiously he made no mention in the interview of Joseph Oller’s Nouveau Cirque designed by architects Sauffroy and Gridaine, that had opened in Paris on 12th February 1886, three years before his, and had been an aquatic circus sensation!

Enjoyed this blog very much!

If you follow this article so it can be proved advantageous to you.