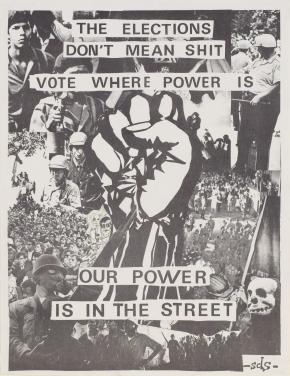 At University I was instructed to use the internet with caution- fine to look up a date or person on Wikipedia but never cite it as a source or rely on a Google search to provide all the answers. However whilst researching the backgrounds of the modern protest posters for the display A World to Win: Posters of Protest and Revolution I started to rethink my approach to online research. The vast wealth of information now available on the web is a rich resource and a postmodernist historian’s dream, providing alternative voices and acting as a memory bank for people marginalised from mainstream historical accounts. 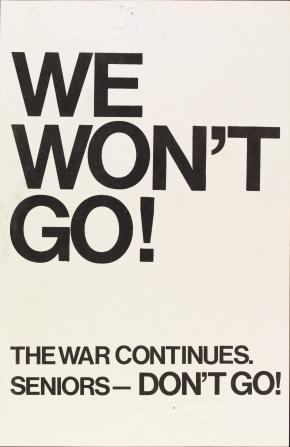 ‘Our Power is In the Street’, ‘We Won’t Go!’, ‘Fuck the Draft’ shout some of the posters created by the American students and young activists who in the 1960s were actively demanding their civil rights and vehemently opposed to the American-Vietnam War. Now termed the baby-boomer generation, many of these same activists are interested in sharing their experiences of protest with a new audience online.

Some of the material I found online simply helped to broaden my own personal understanding of the political context in which the posters were created. One of my favourite posters in the display shows Danny Lyon’s photograph of two young, black civil rights protestors captioned by the simple yet effective message NOW. The poster was published by the Student Nonviolent Coordinating Committee, a youth-led nonviolent direct-action campaign group against segregation and other forms of racism. Initial research established that Lyon, who was a member of the SNNC, took this photograph at the 1963 March on Washington, the event where Martin Luther King’s gave his legendary ‘I have a dream speech’. I was excited to find footage, uploaded onto the video-sharing site Vimeo, of another speech made on that day by the 23 year old national chairman of the SNCC, John Lewis. Lewis ended his impassioned speech by insisting that “We must say wake up, America. Wake up! For we cannot stop, and we will not and cannot be patient”. The visceral urgency with which Lewis delivered his speech, evident in the black and white footage echoed the tone of the SNCC poster and that of his fellow young Americans who demanded immediate change.

Another poster from this time ‘Fuck the Draft’, which shows a young man burning his draft card, is now iconic for showing the dissent against the American-Vietnam War. Opposition to the war was an issue that galvanised a generation of students and activists, many of whom turned to the medium of the poster to express their moral objection to the war. The drafting of men became a major catalyst for opposition to the Vietnam War, especially among college students and burning the draft card became a symbolic act of defiance. However despite the notoriety of the poster, we knew very little about its creator. The poster itself details the publisher as the Dirty Linen Corp. When I tried to find out more about this company, it led me to the name Kiyoshi Kuromiya. An old 1968 copy of LIFE Magazine uploaded onto Google Books revealed the full story.
Kuromiya was born in a Japanese internment camp in America. Whilst studying at the University of Philadelphia he enacted a series of stunts aimed at opposing the war in Vietnam. In 1967 he issued a press release stating that on a certain day in a public square a dog would be covered in home-made napalm to demonstrate the horror of the US government’s use of the chemical in Vietnam. Over 2000 people turned out to protest, only to be handed a leaflet produced by Kuromiya congratulating them on saving the dog, but asking them to turn their attention to protecting the life of Vietnamese children from the same fate.
A year later, Kuromiya produced ‘Fuck the Draft’ under the facetious pseudonym the Dirty Linen Corp. He distributed the poster via mail order, advertising it as ‘the perfect gift for Mother’s Day’, with the promotion ‘Buy five and we’ll send a sixth one to the mother of your choice’. The White House was one of the options the bonus poster could be sent to. The language Kuromiya used in the poster was designed to shock the establishment and resonates with the ways in which 1960s American youth culture sought to challenge authority through alternative politics, lifestyles, fashion and music. Soon after Kuromiya was arrested by the FBI for using the US postal service for inciting lewd and indecent materials. Later that year he handed out 2000 of the posters at the Democratic Convention in Chicago. Kuromiya continued a life of activism, becoming a prominent AIDS campaigner and also playing an important role in defeating the American ‘Communications Decency Act’ internet censorship law.
It is the nature of the protest poster, often created in a hurry and swiftly distributed that the process or context in which it was created is undocumented or unknown to all but a few. Yet through personal memory published online and the diligence of those willing to upload these memories, we now have access to information previously unpublished or too obscure to find. I await with anticipation to see what else will emerge in the future that will tell us more about the individuals and groups behind these remarkable posters.
1960s display poster protest word and image
Share
0 comments so far, view or add yours