As I sit down to write the first entry for this blog, London is buzzing with Olympic fever: there is only one day left to go before the opening of the London 2012 Olympic Games. This presents me with a perfect opening subject – especially as Olympic posters are an area of the collection that we’ve been focussing on for some time at the V&A.

When London won the bid to host the London 2012 Games Margaret Timmers (former head of Prints at the V&A and my predecessor in curating the poster collection) had the inspired idea of mounting an exhibition that would collect together posters from each successive Olympiad beginning with the Paris Games in 1900 (there was no poster for the first modern Olympic Games in Athens in 1896).  The run of posters she assembled leads the viewer through just over a century in four year time lapses, each poster serving as frame that reveals a particular period, place and political context. I think this is what surprises people most about the exhibition – it’s not just the history of promoting and celebrating the Games (although this is a fascinating subject in itself). These posters have further stories to tell about changing design practices, the pre-occupations of host cities and the tensions of international relations.

The exhibition ‘A Century of Olympic Posters’ opened in Beijing in January 2008 in the run up to the Beijing Games and has been touring to international and UK venues ever since. I’ve recently returned from seeing it open at the National Sports Museum in Melbourne where it is perfectly complemented by a permanent gallery about the history of the Olympic Games. Around half of the posters in the exhibition were already held in the V&A collection when we started the project, but an intensive period of hunting down and collecting was needed to plug the gaps and enable us to present at least one poster from every Games. A number of posters that were essential to the narrative of the display were loaned from the Olympic Museum in Lausanne. 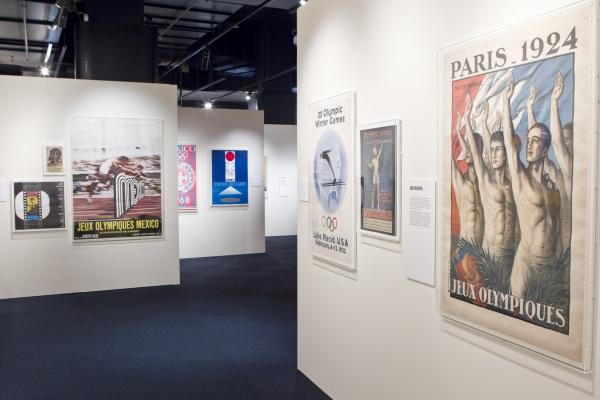 The fanfare, press coverage and debate that greeted the launch of the official London 2012 posters in November 2011 demonstrated that people still feel Olympic posters matter. Like the stadia, the torch and the medals, posters are one of the design elements that are revealed in the run up to an Olympic Games in a process of gradually raising people’s anticipation. Now other kinds of Olympic posters are appearing on London streets: advertising posters for Olympic sponsors, local celebratory messages, posters delivering travel advice, protest posters (see Brandalism UK for an example of the latter). Whatever we might feel about the designs they help create the sence that the Olympics have arrived in town. 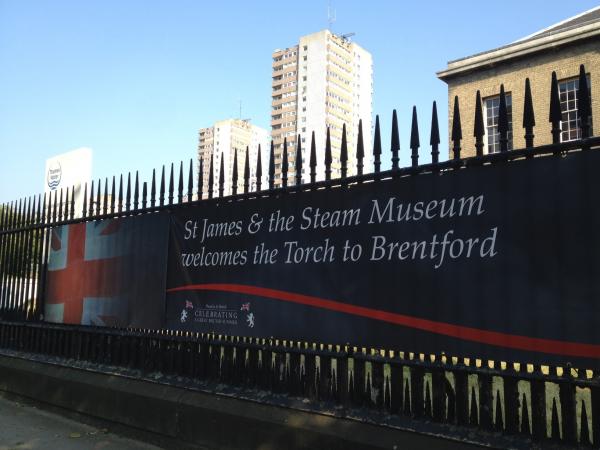 A banner on railings in London welcoming the Olympic Torch

During the course of the London 2012 Games, I’ll be posting a selection of Olympic posters from the V&A Collection and introducing a few of the different themes they rasie. First up are some thoughts on Olympic iconography:

The poster produced for Stockholm 1912 Games (below left) introduced some of the key themes of Olympic iconography. It was executed in Art Nouveau style by Olle Hjortzberg, a member of the Swedish Royal Academy at a time when posters were considered an exciting modern medium for art as well as advertising. The celebration of the male nude on such a public platform as a poster caused controversy (even after the addition of some carefully placed orange streamers a number countries banned it from display in certain public areas on grounds of morality). Nevertheless the sculptural male body beautiful became a recurring feature of early Olympic posters. The Olympic Movement grew out of late nineteenth century pre-occupations with physical culture and evoking ancient Greek ideals of physical beauty was a fundamental part of its vision and sense of legitimacy. Pierre de Coubertin, the founder of the Games, wrote that ‘Sport must be seen as producing beauty and an opportunity for beauty. It produces beauty because it creates the athlete, who is a living sculpture’.  During the first half of the twentieth century the human figure on Olympic posters accrued added meaning in relation to the social agenda of Modernism and its emphasis on the healthy body. 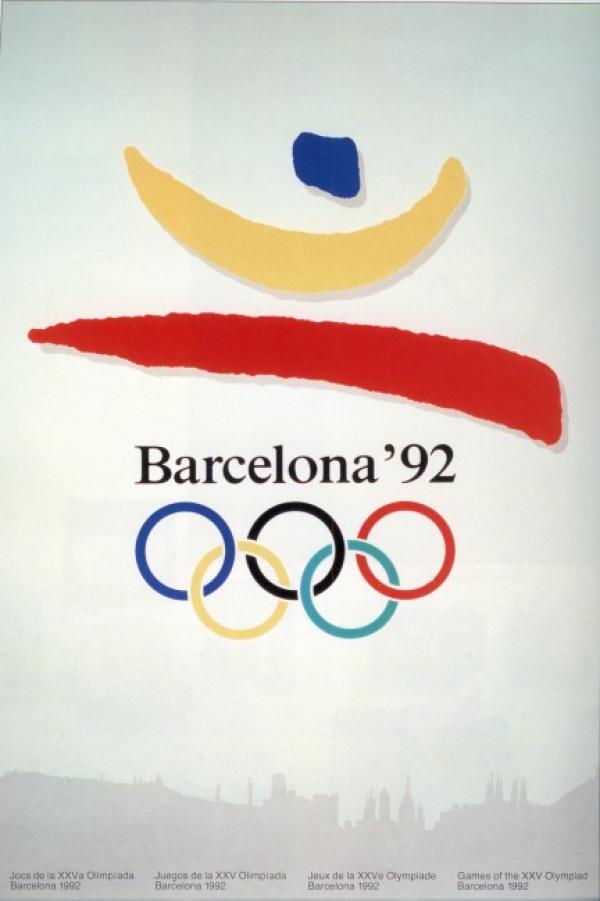 The other dominating element of the Stockholm poster is a billowing cloud of national flags.   A simpler solution to representing the idea of international competition (and avoiding diplomatic discord over whose flag was most prominently featured) was arrived at in the creation of the five interlinked Olympic rings. The rings were conceived by Pierre de Coubertin and were first described in 1913 as representing ‘the five parts of the world’ in the colours (blue, yellow, black, green and red) that are found on the flags of all nations. The symbol first flew on a flag at the Antwerp Games of 1920 and, after the bellicose nationalism of the First World War, it offered a fresh and alternative means of depicting the panoply of nations united in competition. Contrast the Stockholm poster with the one produced eighty years later for Barcelona in 1992. The key elements are the same: an energised human figure alongside a representation of all nations. The design approach, however, has evolved completely from a illustrative image to a graphic language of symbols and emblems. Flags are replaced by Olympic rings and a detailed rendering a human anatomy has become a pictogram that suggests a body in just three strokes.  The other pillars of Olympic iconography are the Olympic flame, the torch and the Olympic and Paralympic mottos.

You can browse Olympic posters in the V&A collection here. For further reading see Margaret Timmers, A Century of Olympic Posters (V&A Publishing)