An exhibition at Rich Mix this week presents a range of street art from the uprising in Syria. Guest blogger Nawara Mahfoud introduces the role that graffiti plays.

The Syrian revolution started with graffiti, a dozen schoolchildren scribbled on the wall of their school, “The people want to overthrow the regime.” Two years on, more than a 100,000 people died in Syria and the Syrian regime continues to shell, bomb and arrest its opponents. Syria walls have become living testimonies to the ongoing battle for freedom and to the aspirations of those fighting these battles.

Activists have sprayed stencils of the faces of the fallen ones to remind us, and the world, of their stories. These men and woman are not numbers. They have names, unfinished lives, families and unfulfilled dreams. This tremendous effort has been recreated by artists Aram Tahhan and Ibrahim Fakhri for the exhibition Culture in Defiance: Syria Speaks, at theRichMix Gallery Cafe in London until 13 July. “Not a Number” banner, 4.45 m x 140 cm, spray-paint on canvas, “is an attempt to remind the world of the loss and continuous strife of a people who are becoming reduced to casualty figures in the headlines,” explained Aram, also one of the exhibition’s co-curators. 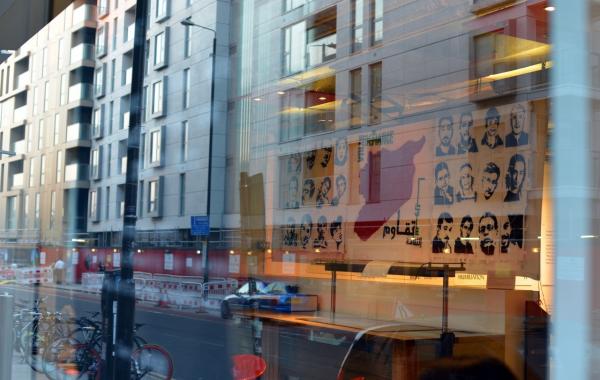 Above: reflection of “Not a Number” banner by Aram Tahhan and Ibrahim Fakhri for the exhibition Culture in Defiance: Syria Speaks in the window of the RichMix Gallery Café, part of the Shubbak: Window on Contemporary Arab Culture festival.

In the early days of the Syrian uprising, it was words and short phrases – “Freedom” or “Down with Bashar Al-Assad” – sprayed quickly, some with shaky lines. However, little by little, the Syrian street graffiti grew into a form of resistance. We started seeing political messages aiming at creating solidarity and undermining the regime’s brutal military campaign: “Your bullets killed only our fear” and in Homs, where the regime forces pushed in, impelling many to flee, we read on a wall, “We were forced to leave, but we leave our hearts here” and“We will return.”

Artists started the campaign Freedom Graffiti Week Syria and began designing stencils featuring many martyrs or certain political messages such as “Release the conscience prisoners.” These were made available in high resolution online for protesters and activists to download, print and cut and spray.

As the war intensifies in Syria, the anger and societal division increase. Walls in a small town north of Syria stands as a brave testament of a revolution that continues to battle a murderous regime but also doesn’t shy away from standing up to the blind anger of war: “Freedom, our homeland is big enough for all of us. Together we are more beautiful, for you are still my brother.” 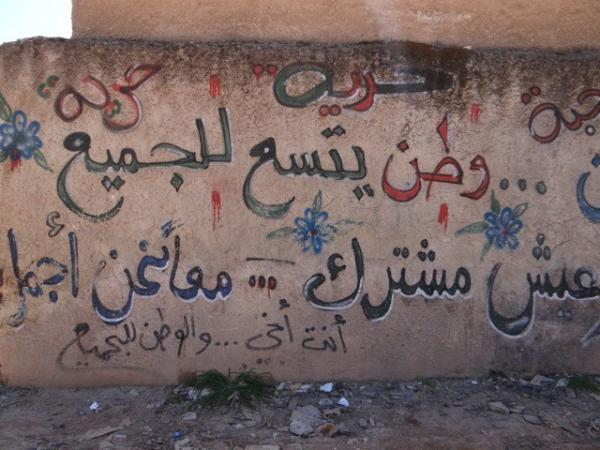 Above: Sarqeb Walls includes the lines, “Freedom, Our homeland in big enough for all of us, Together we are more beautiful for you are still my brother,” Syria, 2013.

For the related publication Culture in Defiance: continuing traditions of satire, art and the struggle for freedom in Syria see here