During the past year I have been involved in a project to clear copyright permissions for posters in the Schreyer Collection. As well as involving research to identify rights holders; this work has given me the enviable opportunity to open drawers and boxes – allowing me to see many of the designs. Some of my favourite posters are those produced by literary publishing companies during the 19th century. One series advertises Harper’s Monthly Magazine. The posters feature fine lettering and ink drawings. I imagined that the characters depicted could have been elegant protagonists from a novel. I was inspired to read a little more about American posters from this era.

To mark special or festive occasions during the last quarter of the 19th century, the muted and plain covers of magazines were replaced. An outer wrap embellished with illustrations, served to encourage an increased number of readers to select one title over another. At Christmas-times, from around 1890, these illustrated covers had sometimes been enlarged as placards for displays in bookshops. Harper’s Christmas issue of 1892 had been a particular success. It was perhaps this excitement, which inspired the publishers at Harpers and Brothers in New York during spring of 1893; without the excuse of a special occasion, to ask a young man working in their art department to design a poster to herald the forthcoming issue.

Some of the larger publishing companies (notably Harper’s) were the first to exploit real posters in America […] posters took on a new life and began to hold a new meaning for the public mind. People watched for these quaint and dashing conceits.

Charles Matlack Price, Posters; a critical study of the development of poster design in continental Europe, England and America. p. 129. 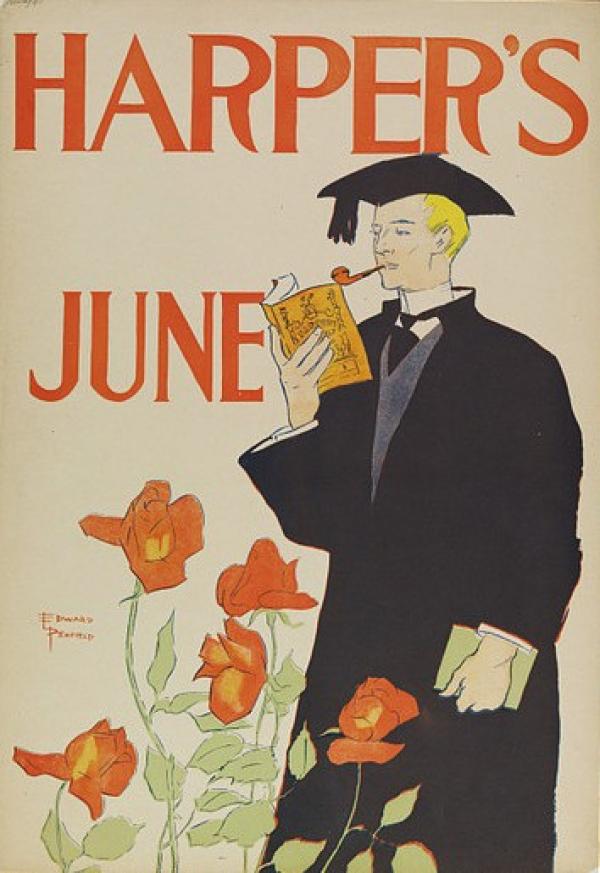 Matlack Price is writing about Edward Penfield (1866-1925). Penfield’s small, illustrated posters first began appearing behind windows of kiosks and news stands during April 1893. This experimental series was the first of its kind – before the year was out, the sequence had inspired rival publishing companies like The Century, Scribner’s and Lippincott’s, to issue similar advertisements. Penfield designed exclusively for Harper’s and his designs continued to appear each month until July of 1899. With these words, the historian identifies several important elements which I think still define a successful advertising poster.

People watched: the poster must intrigue. A sense of suspense is hinted at through the evocation of readers waiting with interest to see Penfield’s next poster appearing in the window displays. Anticipating the next in the sequence, in the same way that they might have anticipated the next instalment of a serial novella printed in the pages of the magazine.

The poster must catch the eye: the message of the poster needs a bold voice and an immediacy of impact akin to the dashing pace of the passers-by’s glance.

What is more, in that brief moment, the poster must persuade or inspire an act. The word conceit perfectly denotes Penfield’s invitation to the viewer to imagine and to aspire; while at once implicit of the shadows of trickery at play in advertisements. 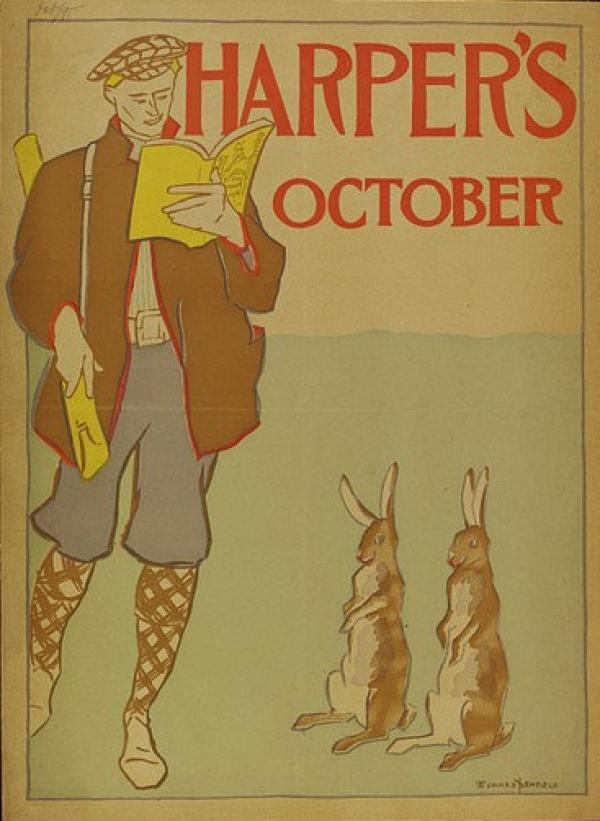 For me, the image of the figure reading is particularly interesting. Penfield is astutely engaging with the question of how a Harper’s reader; or an aspiring Harper’s reader might spend their time. The implication is one which David W. Kiehl identifies in his essay American Art Posters of the 1890s[ii]: as ‘periodicals were relatively expensive, the prospective reader needed not only money to purchase the magazine but also the time for reading’. Evoking a desirably leisured and intellectual life, the coax of the advertisement remains subtle. The posters serve primarily as persuasive tools; gently cajoling a viewer to wish to attain the lives of those characters depicted in the drawings.

[The protagonists in Penfield’s posters] drove in hansoms or walked briskly across country […] they all had a certain character of their own, these poster-people of Mr Penfield’s mind, and most important, awoke in the American public a taste for better things.

Leslie and Alice Schreyer became poster enthusiasts during their student days in the 1960s, and over the next twenty-five years amassed a collection of almost 3,000 posters, international in interest and origin and dating from the 1890s to the 1980s. Their assocition with the V&A began three decades ago, when, on a trip to London from their New York home, they made their first of many visits to the Prints and Drawings Study Room to view the Museum’s poster collection. Years later, they and their families – Judith and Gabri Schreyer and Tony Batko – decided to donate the bulk of their poster collection to the V&A so that this rich resource of design and documentation would be preserved, displayed and made accessible to students and members of the general public.

If this post has inspired you, other books which may be of interest are:

Harold F. Hutchinson’s The poster: an illustrated history from 1860