PhD candidate Matilda explains the importance of a dress in preserving memories of her grandmother and how she recycled the dress to honour her memory.

This dress belonged to my Dutch grandmother. She crocheted it as part of her trousseau. She was born and lived in Batavia, the then Dutch East Indies. She came over to England just before World War II to visit her British in-laws and due to shipping lanes being bombed she was not able to return home to Indonesia. She spent the rest of her life in London. For some reason the dress and its multi-coloured slip became part of my sister’s and my dress-up box.

Years went by, we grew up and the dress was rescued by my mother who carefully stored it away. Being interested in historic dress and sewing, I inherited it. Not only did it hold memories for us as children but as I found out more about our grandmother, it became embedded with our memories of who she was. The knowledge that she had left her beloved tropical island for a holiday and was never able to return somehow became infused in the dress. The dress had come to represent her life before the war. The war changed her life; her brother ended up on the Burma railway, her best friends were interned in Japanese prisoner of war camps and she survived the war by living in London.

This dress and my re-fashioning of it has been done in remembrance of her.

It was originally full of moth holes. I darned the holes, or to be more accurate, re-crocheted the eaten sections. The dress, in my view, needed not just to be repaired but updated, so I unravelled a section of the bottom of the dress, dyed this unravelled wool black and crocheted the black trim that it has now. It became clear through close analysis that the slip dress had not originally been made for the dress nor did it highlight or celebrate the dress’ complicated crochet pattern, so I dyed the slip black to complement the dress’ new black trim.

The dress, I felt, needed a jacket so using a pattern found in a 1933 Women’s Wear Fashions magazine, I constructed one which I thought would make the outfit more of an ensemble. As I wanted to re-fashion the dress and create the jacket without purchasing any new materials (a homage to the 1943 Make Do and Mend scheme) I decided to make the jacket out of entirely repurposed materials. The jacket is patchworked entirely from used Dylon Colour Catchers.  I like the fact that the jacket is made out of strips of ‘stuff’ that has picked up the dye run from both my and my children’s clothes. In a way, I see it as blending both my grandmother’s life and mine together. The jacket is trimmed with the unravelled crochet wool that wasn’t dyed. It had such a nice uniform kink to it that I knew that I could find another use for it. I was inspired by a 1960s Chanel jacket!

Some may consider it sacrilege to re-fashion a 1930s dress but historically clothing was commonly unpicked and re-fashioned. Furthermore, it is used as an example in my hopefully forthcoming doctoral thesis. The jacket has a label sewn into it detailing its history with a photo of my grandmother as a beautiful young woman lounging in her garden in Batavia. We remember her living in a bedsit in Earls Court. Times change and so do garments. 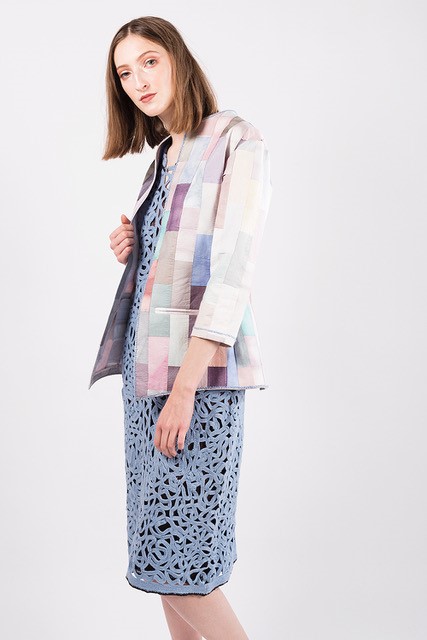 The next post will look at the exhibition and graphic design of Fashioned from Nature.