In the 19th century, as Frank Rose describes in ‘The Art of Immersion’, novels were only just beginning to find acceptance in polite society and their serialization was considered – by some – a step too far. In serial form, they became ‘dangerously immersive’. Rose cites a contemporary 1845 critic getting extremely vexed at this new form of publication which, ‘throws us into a state of unreal excitement, a trance, a dream, which we should be allowed to dream out, and then be sent back to the atmosphere of reality again, cured by our brief surfeit of the desire to indulge again soon in the same delirium of feverish interest. But now our dreams are mingled with our daily business’ (which, clearly, was a bad thing). Victorian commentary on the dangers of such immersive experiences aren’t a million miles off today’s discussion of the risks around virtual reality, from nausea and disruptions in stereo-acuity, to collisions with pets and ceiling fans.

But now our dreams are mingled with our daily business.

Defining what ‘next generation’ experience might be, is that bit harder. It’s too easy to get drawn into tech speculations. Yet at the heart of any immersive experience (next generation or otherwise) is storytelling. And museums are good at telling stories – granted, those stories are selective, as are the decisions around who gets to tell those stories. For every story that does get told, there are many that don’t. That is where digital technology can do some of the heavy lifting – making it possible for an object to exist in different and multiple contexts, in a way that is not possible in the physical galleries.

For a museum with some 2.3 million objects, spanning 5000 years of human creativity, we have a lot of stories to tell. Some objects, though, are riper for storytelling than others. Some objects are complex, or very fragile, perhaps visually less appealing. But the stories behind them, no less interesting.

We have selected one of the more challenging objects in the V&A collection – a Charles Dickens manuscript – as the focus for Immersive Dickens, our AHRC funded research into next generation immersive experience. Together with pioneering immersive theatre company Punchdrunk Enrichment and award-winning creative technology studio, The Workers, we ask, How can we bring digital technology, performance and curatorial practice together to give young people a sense of creative agency when encountering a historical object?

Why is a manuscript such a challenging object? It can’t be handled or viewed in full; it’s full of complex handwritten revisions and not easy to read; it doesn’t have immediate visual impact and the connection with the rich imaginative world of Dickens’s fiction isn’t always obvious. But the manuscripts are the best evidence we have of the creative process of one of the UK’s most important and renowned authors, whose work has continuing relevance. Dickens was an observer of urban material culture and life in a period of rapid technological innovation and widespread financial insecurity, a writer who explored themes that still resonate today.

We want to involve the next generation in the development of a ‘next generation’ experience. We have chosen a demanding audience, in the shape of teenage students. By helping them discover and understand Dickens’s creative process, we aim to inspire young people’s self-expression. We want this experience to have a life beyond the museum for the young people involved – and hope that it will make a lasting appeal to their creative spirit.

By prototyping an immersive experience, centred on the manuscript, we will explore how digital technologies can augment immersive theatre techniques to create a performative environment, one that doesn’t necessarily rely on performers. By interrogating the latest technologies with our peers in the creative and tech industries, we hope to shape and drive innovation in this area. And by identifying relevant methodologies, we aim to forge new creative practice, within the museum and beyond.

By October 2018, we plan to consolidate our findings in a case study and toolkit for others to understand, experiment with and exploit new technologies to turn object-based narratives into new immersive experiences. And, in the meantime, we look forward to sharing our journey through the project blog.

How things are made: Knitting 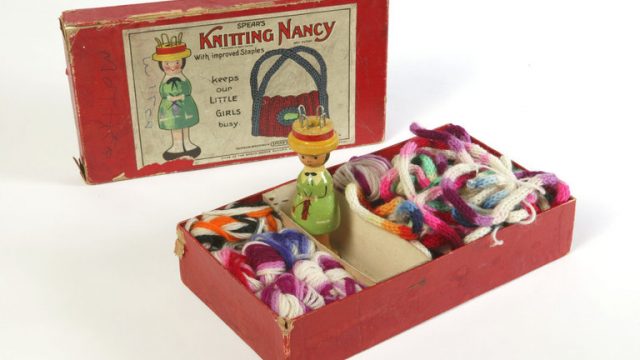