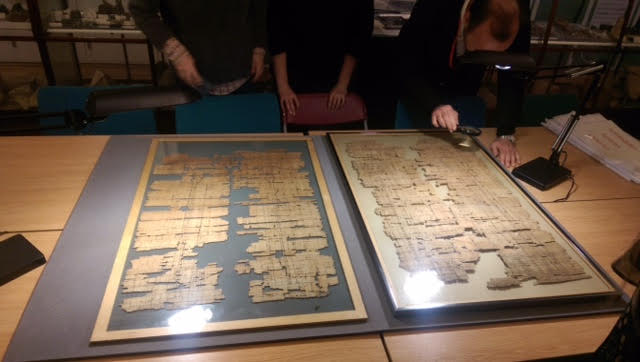 As part of the V&A/RCA History of Design MA students were invited to participate in a week-long workshop entitled ‘Faking Palladio’ with Guido Beltramini, the director of the Palladio Centre in Vicenza, who in the Spring was based in the V&A’s Research Department, as one of the inaugural Mellon Professors, attached to VARI. In this post student Dani Trew describes her experiences of the workshop:

Guido is the leading expert on the sixteenth-century architect Andrea Palladio and his passion and excitement for the subject is contagious. We spent the week with him thinking about Palladio’s drawings as material objects and understanding how Palladio used drawing as a tool for a variety of purposes including thinking through initial designs, communicating with patrons, with builders, and preserving his designs for posterity in his published drawings.

In particular, we were made aware of Palladio’s debt to Vitruvius – not only the classical architecture as outlined in The Ten Books on Architecture, but also the influence of Vitruvian military formations in which constituent parts can be rearranged in any number of configurations. This is at the core of Palladio’s architectural language and is most apparent in his initial design drawings. Whereas other contemporary architects, such as Raphael, thought through their designs by overlapping options on top of one another, Palladio played with modular units in various permutations across the page. As well as taking influence from Vitruvian military formations, this approach to drawing was also informed by his unusual training as a stonemason rather than as an artist.

Guido’s knowledge of Palladio’s life and the context in which his drawings were produced was complimented by conservator Lisa Nash’s understanding of the drawings as material objects. We were lucky enough to be able to handle the Palladio drawings that Lisa looks after in the RIBA Drawings and Archives Collections at the V&A. Lisa highlighted the distinctive material qualities of Palladio’s drawings and how they have interacted with their environment over time. For instance, the use of red chalk for in situ sketches; his distinctive letters which change throughout his career and aid dating; the embossed lines of an ivory stylus used for preliminary under drawing; the aggressive deterioration of iron gall ink; and the red line bordering some of the images, indicating that they belonged to Lord Burlington in the eighteenth century.

At the end of the week a small group of us helped create a mini exhibition in the V&A’s Research Department with Guido. The display presented a Palladio drawing – a different one each week for the duration of Guido’s visit – with our annotations alongside it. It was a privilege to work alongside Guido on these projects and we learnt a great deal about how to communicate research engagingly and economically to an audience completely new to the subject: a skill which is at the heart of what we do as design historians and which Guido does so expertly.