After months of conversations, concept development, planning, filming, designing, and editing, the V&A has finally arrived in the beautiful Jaroslav Fragner gallery in Prague to install Glastonbury: Land and Legend as part of this year’s Prague Quadrennial.

Sodja Lotker, Artistic Director of the Prague Quadrennial, initiated the SharedSpace: Music Weather Politics project back in 2011 and the V&A have since been working as part of a European team to develop further ideas and discourses around the scenography of music, weather, politics and tribes.

Kate Bailey, Curator of Scenography at the Victoria and Albert Museum, felt that the SharedSpace project presented a unique opportunity for the V&A to celebrate the acquisition of the Glastonbury Festival archive in a creative way and to develop the museum’s conversations with Glastonbury about the scenography of the festival site and its history.

The V&A’s SharedSpace journey began with a symposium, Staging the Spectacular: Designing for Stadiums and Festivals, back in November 2013. The symposium featured designers and architects, such as Willie Williams, Es Devlin and Misty Buckley, who have developed the stadium as an innovative space for rock, pop, opera, theatre and sport and explored the art and design of the shared festival space through their work.

The second event was Shakespeare Tribes, a living exhibition of tribes, inspired by the work of Shakespeare, and created by  costume design students from the London College of Fashion, Central St Martins, Edinburgh College of Art and Bristol Old Vic Theatre School. These tribes were defined by specific dress, behaviour and performance codes and claimed ‘territories’ in the museum. There are beautiful illustrations of our winning tribe, the Shakespeare Fools, on the V&A blog here. They will be performing as part of the Tribes project at the Prague Quadrennial this year.

The culmination of all these events and conversations is our installation ‘Glastonbury: Land and Legend’ and we are very excited to have finally arrived at Day 1 of the install!

The first task was to meet the truck, which had come to the end of its 900 mile pilgrimage from Leicester to Prague, transporting its precious cargo of installation materials.

Once all the equipment had been moved into the gallery space, Oli and Adam from Hawthorn set about masterminding the build of the enormous installation structure. This comprises 135 pieces of scaffolding, 16 panels of galvanised, corrugated steel and 48 square metres of wooden flooring. It will house the immersive film and sound installation, created from footage and sounds captured by our team at the Glastonbury Festival in 2014.

The installation design was conceived by Emily Harris, Director of the installation and Head of Digital Recording for the Theatre and Performance Department at the V&A, and Luke Halls, video designer extraordinaire. Their chosen materials create a distinct environment, which captures the texture of the Glastonbury Festival and highlights the scale of the infrastructure underpinning both the installation and the Festival itself.

By the end of the day, the outer structure was pretty much complete. And what better reward than some traditional Czech cuisine! 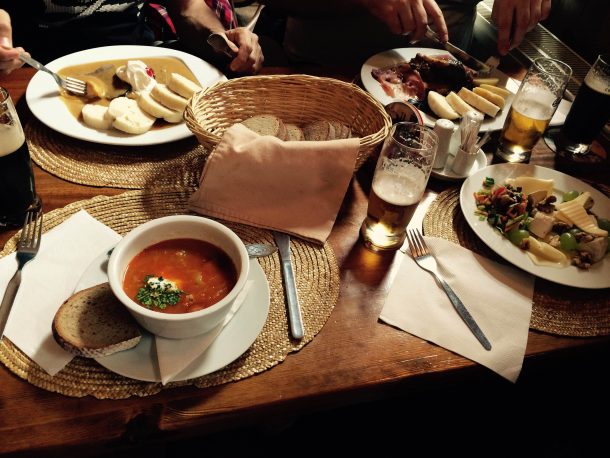 Glastonbury: Land and Legend will be open to visitors in the Jaroslav Fragner Gallery, Prague, from 28 May – 28 June 2015.