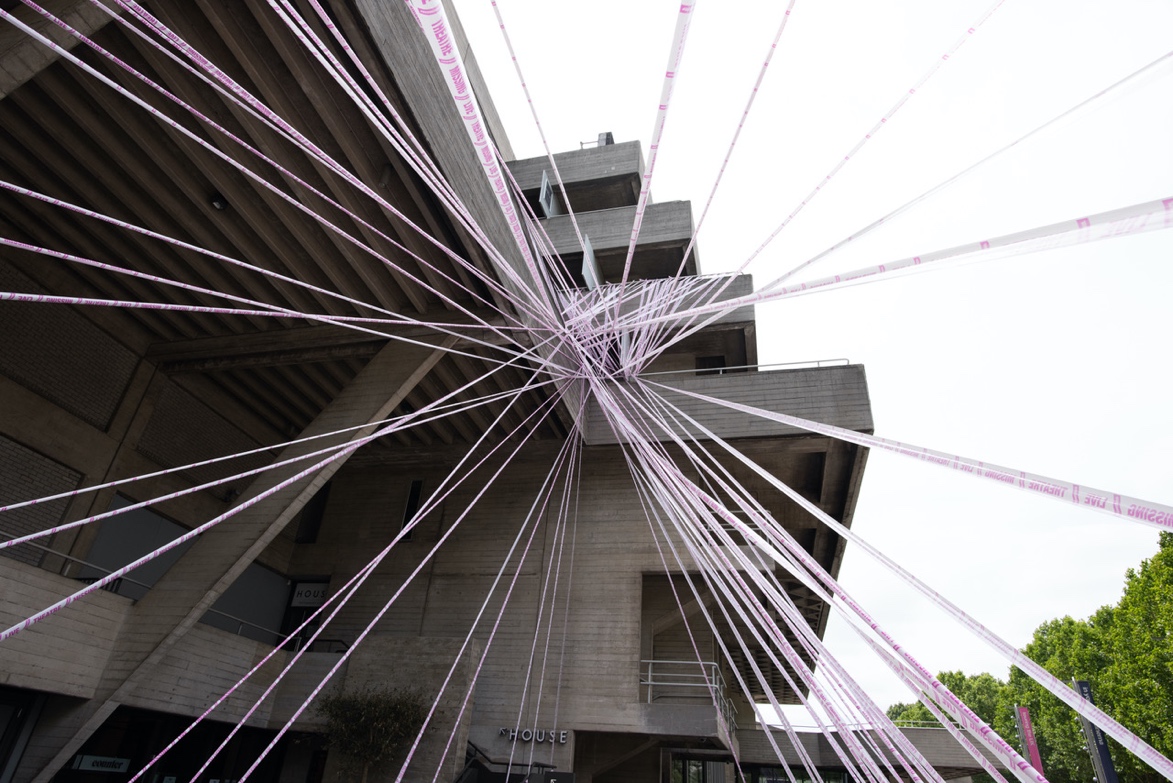 On the 15th of July, a community of theatre designers up and down the country began staging a nationwide event called Scene Change to draw attention to the plight of theatres in the pandemic. Theatre buildings were wrapped in specially-created tape printed with the text – ‘missing live theatre’. Meanwhile, another initiative organised by the live event industry called ‘LightInRed’ immersed stages and venues in red light drawing attention to the scale and impact of Covid on the workforce behind these now silent stages and cathedrals of performance.

Theatrical happenings like these have been taking place across the UK, from big to small venues, and from rural to urban settings to raise awareness of the immediate challenges facing the theatre and performance industry. But they are also helping to shine a light on the precarity of freelance workers who contribute so much to the production of live events.

As theatre designer Anna Fleischle wrote in The Independent:  “Seventy per cent of the theatre workforce is made up of freelancers. After lockdown, that workforce was sent home from across the world within a matter of days, all work was cancelled and many of us were not able to claim financial support. Even though we create the work that you see on stage, we are on the outside of the actual buildings – our journeys between them is our lonely path”

The scale of freelance work in the theatre industry is reflected in another campaign called ‘Freelancers Make Theatre Work’, designed to be an inclusive community for the 200,000+ freelancers who make up the 70% of the work force from costume designers to prop makers. The diagram they have produced here shows the complex interconnected ecology of the freelance theatre workforce.

The stated mission of Scene Change is to: “to bring our theatre community together in solidarity using the #MissingLiveTheatre message on banners, on flyers, in lights and on tape and raise the visibility of all theatres, large and small, commercial and subsidised, community venues and voluntary run buildings.” Each tape installation has provided a powerful image – instantly understood and immediately connected. Scene Change has successfully created public awareness of the dire situation faced by performance venues and theatre practitioners, by bringing their optimistic backstage creativity and energy to the outside of buildings.

The site specific installations created by Scene Change around UK theatres and performing arts venues are bold and hopeful statements of civic, local and national pride, extending beyond egos and individuals. They are a simple scenographic statement, brilliantly executed in individual ways connecting audiences with design, story and emotion, inspired and made by a theatre community reaching out and showing solidarity. Sometimes the tape appears to be exploding from empty buildings such as the Everyman in Cheltenham or the Swansea Grand Theatre, or it is reminiscent of beams of light firing from theatre facades as seen in Bromfield’s Theatre. The Longfield Hall turned its building into a kind of may pole with ribbons streaming from its circular architecture, and the tape around the Theatre Royal Newcastle has enshrined the theatre almost as a protective barrier. This clever, bold, playful concept can be shaped and imagined by a range of designers and makers across the profession to suit the architecture and the space –with each transformation clearly part of the overall narrative.

Echoing a similar message, the LightInRed movement was launched on the 6th of July by Clearsound Productions in partnership with the Backstage Theatre Jobs Forum to shed a light on the crisis facing the events industry. Across the UK, performing arts venues were illuminated in red, signalling a call for help and focusing attention to the often hidden workforce behind the UK live events business which was thriving before the pandemic. Glowing red buildings included the Pyramid Stage at Glastonbury, alongside the National Theatre in London and the Theatre Royal in Dumfries. The dramatic red buildings stressing danger to government and audiences of the scale of the problem faced by the industry.

Both of these powerful and engaging visual projects have highlighted the fragile creative economy of an industry, which together with arts and culture, contributes £10.8 billion to UK economy.

The backstage teams, as well as the majority of performers across UK theatres are freelancers. It is this creative community who have helped make British theatre invaluable to the UK economy, and who are at greatest risk from the financial threat of Covid. Described by the Creative Industries as a ‘Cultural Catastrophe’ on June 17th, with over 400,000 creative jobs at risk, the UK creative industries were predicted to lose £1.5 billion a week in revenue in 2020.

It was very welcome news that in same week of Scene Change and LightInRed that the government announced a subsidy of £1.57 billion for the creative industries. However, in practice the near future remains complex with many theatres and venues unable to reopen as social distancing is not economically viable;  and the industry is anxiously awaiting future guidelines on when venues can safely move to stage 5 in the government plan, permitting fuller indoor audiences.

It is of course, very fitting that the Scene Change initiative which united UK-wide theatre and performance industries was imagined and realised by theatre designers. It is these collaborative performance designers and backstage practitioners, usually working in live performance, that are responsible for creating theatrical worlds, working with diverse teams to define the visual language for stories and performances. They are the imaginative collaborators listening, creating, making and shaping our shared experiences.

The recent exhibition Staging Places – created by the Society of British Theatre Designers and displayed at the V&A in 2019 celebrated this idea – revealing how set, costume, lighting, video and sound designers build the content and interpret and imagine stories for different stages, place and audiences. The exhibition included a diverse range of designs from across the UK including David Farley’s site specific creation of The Flood in Hull in 2017, Rajha Shakiry’s powerful design for the award winning production Misty first staged at the Bush Theatre and Becky Minto’s touring production Out of This World.

As I write, it is inspiring to see how outdoor venues and spaces are cautiously reopening, from the The Minack Theatre in Cornwall to Regent’s Park Open Air Theatre and to see how theatres are experimenting with social distance. Beverley Knight staged a successfully socially-distanced gig at the Palladium on the 23rd of July. And we eagerly await the Donmar Warehouse’s socially-distant production of ‘Blindness’ opening in August, in which award-winning playwright Simon Stephens has adapted Nobel Prize-winner José Saramago’s dystopian novel Blindness as a sound installation, directed by Walter Meierjohann and with immersive binaural sound design by Ben and Max Ringham and voiced by Juliet Stevenson.

Performance designers and makers help us create vivid sensory worlds that engage the imaginations of performers, participants and audiences. At a time when the term ‘immersive’ is constantly being used to describe and develop screen-based experiences, we must celebrate and recognise that the theatre practitioners invented immersive, visceral physical and digital experiences inside and outside of theatre buildings: from Punchdrunk’s Drowning Man to Katie Mitchell’s multi-media theatre productions; from the opening and closing ceremonies at the London 2012 Olympics to the site specific Passion by National Theatre Wales and Wildworks in Port Talbot. The creative skills incubated in theatre can also extend into other disciplines and spaces. For example creating outdoor public art commissions such as the Poppies installation at the Tower of London, designing mixed reality experiences, creating costumes for video games, or reimagining museum spaces and exhibitions.

This versatility can be seen in the work of theatre designer Tom Piper: ‘”As a theatre artist I have seen my work develop outside of theatre spaces with the increased public appetite for immersive and participatory art experiences. My design for’ Blood Swept Lands and Seas of Red‘ with artist Paul Cummins at the Tower of London, became a semi performative piece as the volunteers planting the poppies became unconscious actors watched by the crowds who gathered above the moat. While for Alice: Curiouser and Curiouser, at the V&A ,I am creating a world that both supports the work of the many fantastic artists who have been inspired by the Alice stories, but allows space for the imagination of the audience as they make their own transformative journey within the exhibition.”

But while immersive theatre plays an important role in today’s digital experiences from installations to gaming to VR, we look forward to theatre’s return to physical spaces too and to a world where the skilled designers and makers can return to making live theatre work. We know that theatre practitioners are extremely imaginative, and from history that times of struggle and change trigger extraordinary creative expression. Theatre has always been a mirror to life – a reflection or a reaction, a protest or an escape, and for all of us who are missing live theatre we eagerly await the next scene change and to a wave of new stories and experiences. As Peter Brooks stated in his book The Empty Space: “a stage space has two rules: (1) Anything can happen and (2) Something must happen.”

A renewed focus for sustainability at the V&A

The magic of the tree