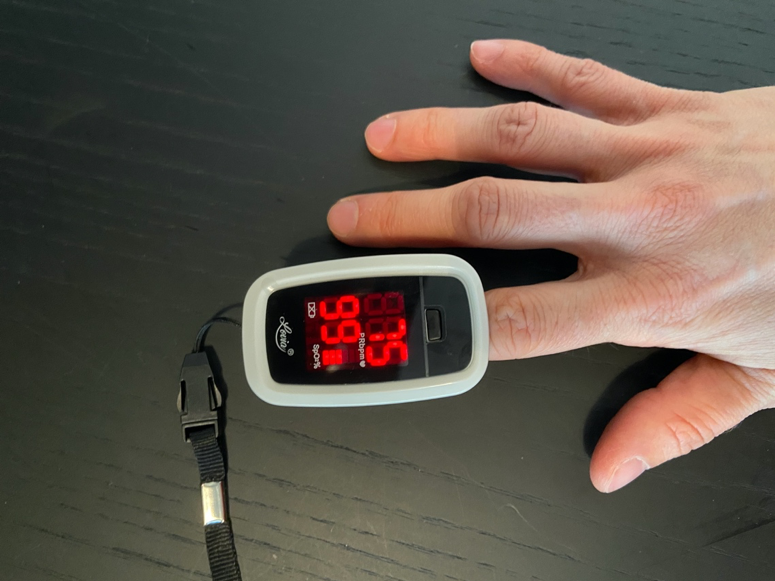 When the new Covid-19 pandemic broke out, my sister-in-law who works as a doctor in the main hospital in Bergamo – one of the most affected cities in northern Italy – almost immediately urged me to buy a finger oxygen sensor, also known as finger oximeter.

It is a lightweight device used to monitor the amount of oxygen carried in the body. At the beginning of the pandemic, my generation of forty-somethings was not considered at risk but as time went on, the threat seemed to extend to all age groups. My sister-in-law explained that Covid-19 was more insidious for our generation – who were still considered part of the ‘younger’ population – as it could progress unnoticed inside the body. Most of the forty-somethings who ended up in the Bergamo hospital were indeed asymptomatic cases until they suddenly reached the breaking point of acute respiratory distress syndrome that inevitably took them to emergency care. In the absence of a test, people were therefore advised to monitor their condition by checking their oxygen level on a regular basis.

As I kept in touch with family and friends on the Continent, especially in France and Italy, I noticed that almost everyone had acquired this small device. Its price rose with its success; a relatively cheap item quickly became relatively expensive. What interested me most though was witnessing how this gadget transformed into a household fetish, as it came to occupy an important place in every home. The rise of the oximeter goes hand in hand with the ongoing medicalization of the household, taking pressure off healthcare systems but also fuelling a booming business. However, the new mania for the finger oximeter seemed to me to go beyond home monitoring to the point where it served almost as a magic charm, part of a regular daily ritual: any sign of fluctuation in the oxygen saturation became a worrying indicator that one might have caught the disease. At the same time, such regular checks provided the reassurance that one had eluded the virus for the time being. The oximeter came to serve a form of protection in itself, and suddenly reminded me of similar forms of protection against pandemics such as amulets and talismans.

During the Middle Ages and in more recent times, Saint Sebastian and Saint Roch were believed to protect from the plague, acting both as defenders and healers. According to legend, St Roch, who is traditionally represented with the wound caused by the bubonic plague on his thigh, had miraculously survived the disease. Seeing these figures depicted on the outskirts of the cities, or wearing amulets and rings engraved with their image, had therefore a prophylactic effect, as if immunity could be acquired by sight and touch.

All historic pandemics have had their own protective apparatuses. If we think of the bubonic plague for instance, doctors devised a bird-like beak mask which not only signalled their role as potential healers during the Black Death, but also protected them from the disease, which they thought was airborne. The long beak was stuffed with aromatic herbs and essences which were believed to have medical properties. This grim device later became one of the traditional costumes of the Venice carnival, as a means of exorcising images of death and pain through ridicule.

It is too early to say if the kinds of PPE in use today will in turn and in time find their place amongst the many grotesque figures of the carnival and similar festivals. But like the bird-beak masks, we can imagine that they might be sublimated into some kind of costume-dress, acting as a reminder of the first terrible disease of the twenty-first century as well as a secret weapon against its potential return.