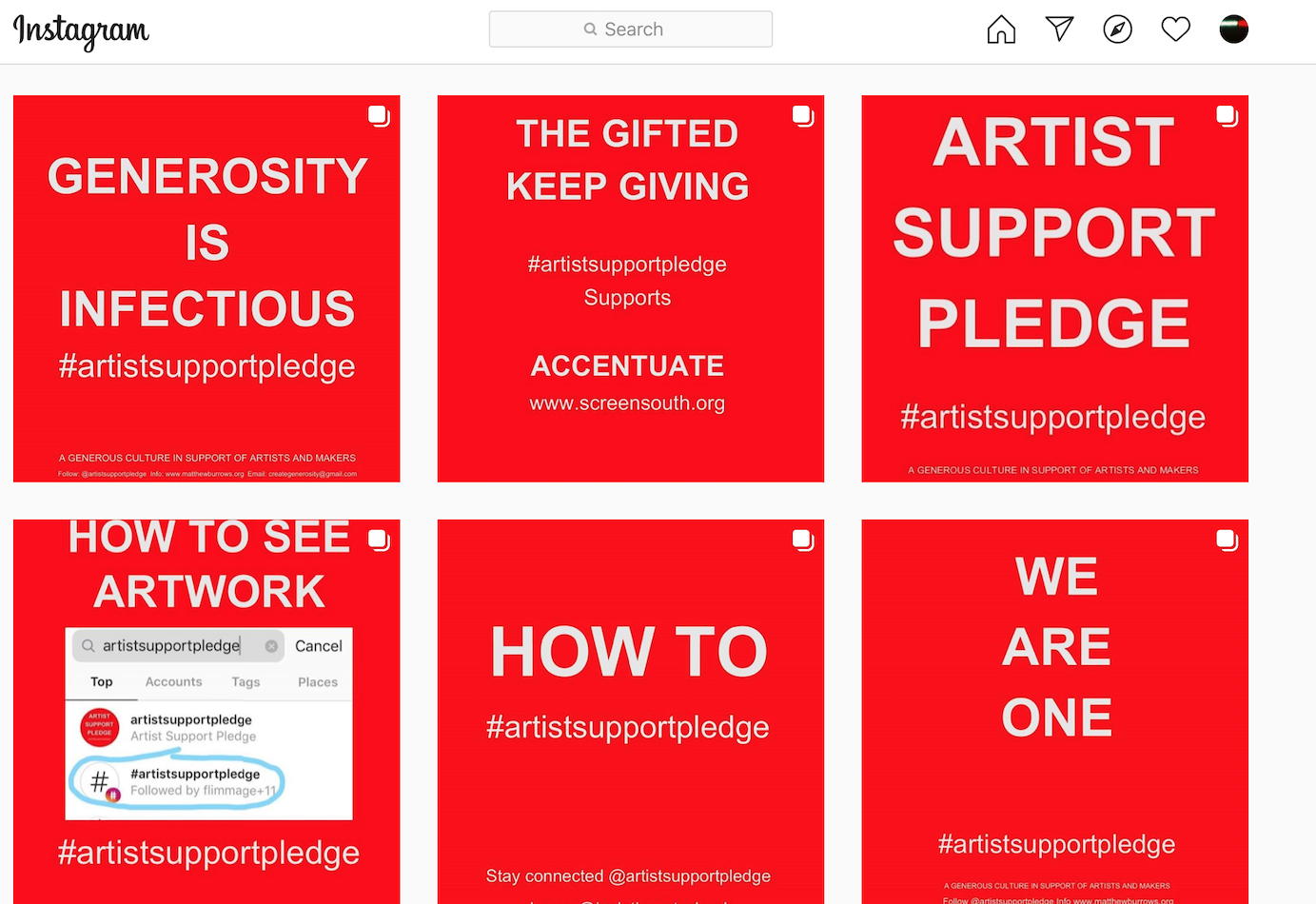 A week into the UK lockdown, a colleague of mine shared how she’d taken to read a page of Katie Paterson’s Book of Ideas, A place that exists only in moonlight, before going to bed. Like many, she was finding it hard to adjust to a new regime of remote working, and each page, ‘an artwork to exist in the imagination’ allowed her to escape the restive mundanity of a life shrunk into the confines of one’s home. As it happened, a few days later the book was released as a limited digital edition in support of Scottish Women’s Aid. The nation had been  urged to ‘stay home, stay safe’, yet for some, home can be a dangerous, even deadly trap. Since the beginning of lockdown, reports of domestic violence have escalated dramatically, a trend not just recorded in Scotland or the UK, but globally, in what the UN calls a ‘shadow pandemic’.

Paterson’s fundraising initiative is one of many to have arisen out of the COVID-19 crisis. We may feel deprived of human contact in this new age of social distancing and self-isolation, but human kindness has not abated: from communities organising shopping runs and dog walks for people shielding or recovering at home, to volunteers sewing scrubs for the NHS. Online fundraising too, has become an expression of socially-distant kindness. And while culture can be severely hit in times of crisis, artists and creative practitioners have played a key role in this contagious generosity.

Vulnerability at home, or without a home, struck a chord with others than Paterson. Artist collective TRACE set up the COVID-19 portfolio of photographic prints sold for £50 during a one-month fundraising campaign for the homeless charity Crisis, and Refuge, which supports women and children suffering from domestic abuse. From a shared studio in the village of Todmorten, the small scale operation (four people doing the enlisting, social media marketing, printing, packing in their spare time) with initially modest ambitions (“we thought we might make £5,000”) soon had to respond to swelling demand: “It was incredibly hard work, but it was the most fun we had in a long time”, says TRACE’s Sian Bonnell. She remains astounded by what TRACE, artists and donors achieved together. Initially listing work from a small circle of friends, they soon gathered a portfolio from 71 British or UK-based photographers, mailing their prints to 33 countries, and raising £72,400: “it really shows, when artists get together, what you can do”.

The vexed question of Personal Protective Equipment(PPE) or lack thereof for NHS staff and key workers alike has made national headlines since the beginning of the pandemic. In April, Sussex ceramicist Lucy Ogden, who has made an unspoken specialty of giving 50% of the sale of her studio stock in support of various causes (Extinction Rebellion last year, WWF Australia following the bushfires earlier this year),  took to Instagram to join the ‘Masks for NHS Heroes’ crowdfunder. In doing so, she joined 36,848 other supporters in raising £2,335,364 in 65 days, illustrating the power of collective action. Meanwhile, the Contemporary Art Society anticipated the wider population’s growing need for facemasks, enlisting four of the UK’s best known artists – Eddie Peake, Yinka Shonibare, David Shrigley and Linder – to design wearable artworks. These were produced to raise money for the CAS Rapid Response Fund in partnership with Frieze London. The fund was devised to help emerging artists during the crisis, and support museums in making acquisitions that will help them connect more closely with their local communities when they reopen, at a time when the power of the arts to interrogate, comfort and unite is dearly needed.

Recognising the existential threat posed by the crisis to cultural and music venues and projects, Wolfgang Tillmans used the platform of his foundation, Between Bridges, to set up ‘2020 solidarity’. The project launched in mid-April, inviting organisations and crowdfunding sites to choose from over 50 posters designed by international artists, which will be printed and distributed to these organisations free of charge when normal postal services resume.  At the time of writing, 37 campaigns have finished, 42 are still live, with a few more planned in the coming days.  Altogether, almost 11,000 posters have been sold so far, raising over half a million Euros. The project is remarkable for its sprawling reach, both in terms of the number and variety of their beneficiaries, from performance festivals to poetry schools, residencies to community spaces, art technicians to night life communities.

As COVID-19 tightens its hold across the world, the crisis highlights social inequalities and injustice afresh, fuelling the fire of “another” pandemic, that of racism. Fundraising with artists’ work was soon put to use to support the waves of Black Lives Matter demonstrations following the murder of George Floyd. Among these, the month-long Earth Issue Freedom Fundraiser run by a collective of environmental artists has been so successful that it went through four rounds of print sales. The proceeds were directed to US bail funds, the UK-based 4Front youth project and organisations “directly impacted by police brutality, racism or racial discrimination in the justice system” nominated by their readership.

Common to many of these fundraising efforts, is how the organisers were unprepared for the overwhelming responses they received from contributing artists and donors alike. What is fascinating is how, with their with relatively limited means,  these campaigns took off and snowballed on social media, particularly the photo and video-sharing app Instagram. Using the newly democratic medium of the smartphone and tablet has created a nimble, rapid, but also focused space for citizen action to take place.

Emblematic of this is the #artistsupportpledge, set up by artist Matthew Burrows in March, when it became clear that, in losing exhibitions, as well as technician, teaching, mentoring and freelance work, artists were at risk of financial hardship. Building on the ethos of trust and generosity that governs his ABC Projects Atelier, Burrows reasoned that a way out of this might be to invent a ‘gifted economy’. His concept is simple: Artists sell their work for £200, €200 or $200: just high enough to make a difference for an emerging artist; low enough, Burrows says, “to be painful” for the established artist, but also to be affordable for buyers with modest means. But here’s the crucial part: once an artist has made 1,000 in sale in the currency of their choice, they must spend 20% of this to purchase work from another artist. As Burrows puts it: “It’s an exciting equation because at every level the weight is always towards giving.” At the time of writing, #artistsupportpledge has over 280,000 hits on Instagram, and it is estimated that £20million was generated within the first month.

Solidarity, camaraderie, kinship, these are the powerful sentiments provoked by a time of global crisis. We may be in the throes of a deadly virus and economic collapse, but “the gifted keep giving”, and “generosity is infectious”, as the #artistsupportpledge campaign puts it. Of course part of the value of such endeavours is that art can bring solace at times of pain and uncertainty, be a conduit for contemplation, help us ponder the issues of our times. These projects are precious in the generosity they demonstrate and provoke, and are lifelines for many. With relatively affordable special editions, they also provide people, some of them first time art buyers, an opportunity to bring art into their own home. Equally remarkable is the meeting of generations, established and emerging artists, in these virtual ‘rooms’, perhaps opening each other’s horizons. What they show too, is that kindness is a form of social engagement; kindness is activism. With their socially-driven focus, these responses to the fragile balance of our constantly shifting world show artists as participants in their local communities and global citizens, as well as art’s capacity to reflect, and  effect change, and sometimes help us see the light at the end of the tunnel.

Artists and designers’ fundraising endeavours are best supported by objects that are produced in multiples, and easily transportable, like prints, or small portable items.  In this, the medallic form is a perfect medium: hand-held, precious-looking but also reasonably cheap to produce. In 1915, French Jewellery designer René Lalique created a gilt bronze medal to raise funds for orphanages in the First World War.

The (RED) label partners with desirable brands to support the Global Fund in working to eliminate AIDS in Africa.  Among the collectible, trendy and luxury items featured by the label, in 2009, Solange Azagury-Partridge editioned one of her celebrity-endorsed ‘Hotlips’ silver and enamel rings, designed in 2000.

Douglas Tootle’s Luciano Pavarotti Toby jug was produced in a limited edition of 2,000, both to commemorate the tenor’s appearance as Nemorino in Donizetti’s opera L’elisir d’amore at the Royal Opera House in 1990, but also to raise funds for the International Autistic Research Organisation, a charity of which Pavarotti was a patron.

Chris Ofili produced his print R.I.P. Stephen Lawrence 1974 – 1993 in 2013 to raise funds for the Stephen Lawrence Charitable Trust on the 20th anniversary of the murdered teenager’s death. The silhouette is taken from his earlier tribute to Lawrence, his iconic painting, No Woman, No Cry (1998). The artist states: “The vicious murder of Stephen Lawrence in 1993 and the pain and suffering of Doreen Lawrence and her family has had a dramatic effect on British life. The painting ‘No Woman, No Cry’, the image of the weeping woman, has always been my way to bring to the surface a sense of sorrow and loss.”

Celebrated English poster artist Tom Eckersley (1914–97) designed this in 1981 for the World Wildlife Fund to raise environmental awareness and draw attention to the charity. Eckersley’s representation of a noose around the Earth is dramatic in its simplicity. The main title, ‘Help save our world’, is deliberately linked closely to the image to emphasize the key words, ‘our world’.

Volunteers stitch together to make scrubs for the NHS, Jessica Murray, The Guardian, 13 April 2020.

Where to buy works of art to support anti-racist causes, The Art Newspaper, 11 June 2020.