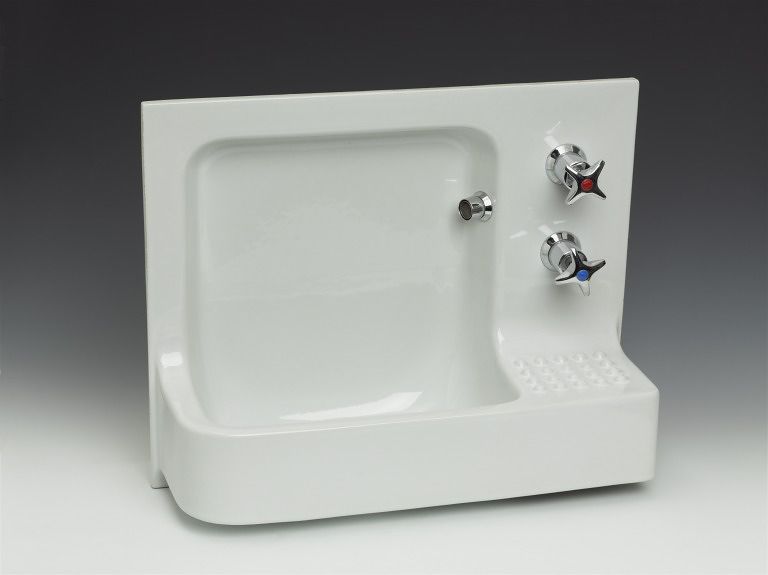 In our age of Coronavirus, handwashing has been at the forefront of public health messaging. Public health advertisements on television drum into viewers the importance of practicing this action , signs in public bathrooms inform the user on the correct lengthy technique with copious soap suds, government ministers end their interviews stressing that this action is fundamental in combatting the virus. The NHS suggests rituals such as singing Happy Birthday twice to encourage the public to take time when washing their hands, so that the practice is not reduced to a minute dampening of digits. Celebrities post videos of them singing along to different tunes as they scrub vigorously.

The ritual of handwashing is very ancient and appears in many cultures across the globe. It is often practiced with strong cultural and religious indications, rather than merely when hands are visibly dirty. In many cultures hands are washed before the meal, and the V&A has many highly decorated water ewers and aquamaniles that speak to this age-old practice.

In Islam, handwashing (along with other ablutions involving different parts of the bodies) is a daily part of wuḍū, a set of cleansing actions done before formal prayers can begin. Water alone is used, although sand may be permitted if water is not available. In Judaism, handwashing (netilat yadayim) is prescribed upon waking up and before eating bread. A blessing will be recited, and water is poured from a vessel onto each hand in a set manner. Ritual handwashing is also a feature in the Christian traditions, where the priest will wash his hands as part of the liturgy. In the Gospel of Matthew, Pontius Pilate, Roman governor of Judaea, publicly washes his hands to allegedly proclaim his innocence in the conviction of Jesus, and a popular subject in Christian art. Daily handwashing is also a feature of Hinduism, Sikhism and Buddhism.

However, washing one’s hands with the intent of removing bacteria, viruses, and thus serve a prophylactic against disease, is fairly new.

Washing hands to prevent disease was first suggested by the Hungarian physician Ignaz Semmelweis in 1846. He was working in the Vienna General Hospital and was trying to understand why the mortality rates for postpartum mothers was so much higher in one clinic than the other. Medical students were taught in the First Clinic, while midwifery students in the Second Clinic. Postpartum patients contracted deadly puerperal fever at nearly 3-4 times the rate in the First Clinic than the Second Clinic. Semmelweis suggested that this was due to nefarious ‘particles’ that the medical students transferred in their hands between conducting autopsies and examining live patients. As the midwifery students were not permitted to conduct autopsies, they had no such ‘particles’ on their hands. Semmelweis’s solution was for medical personnel to wash their hands in chlorinated lime. When this was done, mortality rates for postpartum women in the First Clinic dropped from nearly 20% to practically zero. Unfortunately, the medical community by in large rejected Semmelweis’s findings owning to the lack of theoretical explanation. Why would cleaner hands prevent disease? It would take another twenty years before Louis Pasteur would lay the theoretical groundwork to the theory of germs. British surgeon Joseph Lister read Pasteur’s works and  experimented in the 1860s with a solution of carbolic acid, instructing surgeons to wash their hands and instruments in it before and after operating on patients. Lister had fought an uphill battle before antiseptic surgery was widely accepted.

The public health fight against tuberculosis in the early twentieth century saw children and adults encouraged to maintain high hygiene practices and wash their hands. However, enthusiasm for handwashing has waxed and waned with the public, often declining without a serious threat to public health. While in the twentieth century, careful handwashing in a medical or hospital setting, along with the practice in many cultures of washing before and after meals, might be the ideal, actual compliance was lower. Handwashing as a form of disease control has been a part of previous health campaigns in different countries, such as against cholera or outbreaks of food poisoning. However handwashing as the core plank to public health campaigning across the world has been a novel feature of COVID-19. Anthony Fauci, the Director of the National Institute of Allergy and Infectious Diseases (NIAID) in the USA has remarked on the need for ‘compulsive handwashing’ and how on the whole practices such as handshaking should become extinct. The early days of the lockdown in March in the UK brought a rush on products such as hand soap and sanitiser, as members of the public rushed to be equipped to the ‘new normal’ of frequent, lengthy, and careful handwashing. They found the need afterwards to purchase products such as hand creams to soften their hands, dried out from frequent handwashing. Six months into this global crisis, the question lingers: Will the enthusiasm for careful handwashing outlive the pandemic?

‘How to Wash your Hands’, NHS.