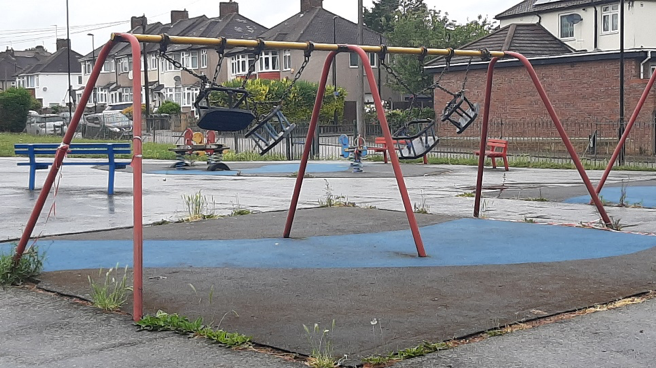 One of the most poignant scenes from lockdown has been the empty playgrounds. Gates shackled, swings removed or hung high out of reach, red and white barrier tape across the seesaw or looped around the handles of the roundabouts. The silence never so loud. Weeds growing. Benches empty.  Now a keen cyclist (having never ventured onto two wheels in three decades of London life) I started photographing playgrounds on my early morning rides, aiming to capture something of their elegiac quality. I can’t say whether the photographs are any good but they do serve as testimony to a space of loss, albeit temporary, and one of many that we are encountering in the pandemic.

To play is to be human: it is how we learn – cognitively, emotionally, physically. And it is particularly vital for children from babies onwards. Italian physician and educator Maria Montessori (1870 –1952), whose eponymous pedagogic methods fundamentally influenced the field of early years education, described play as ‘the work of the child’.  More recently, developmental psychologist Alison Gopnik spoke of play as ‘the signature of childhood’. The origins of early years education are traced to the work of Friedrich Froebel (1782 – 1852). Froebel founded the kindergarten movement in Germany in 1837 by opening his own – and the first – school for children under 7.  The kindergarten movement recognised the value of explorative and outdoor play from the early years onwards and created a radically new approach to and understanding of the role of play developmentally. The V&A Museum of Childhood collection includes the Donne Buck archive of play and playgrounds and examples of Froebel’s ‘gifts’ – educational materials suited to a child’s development.

The Buck archive is an internationally significant collection recording the practice, people and politics of adventure play in Britain over six decades. The cause to promote play as a fundamental right of the child is as vital now as it was in the post war years. Speaking to Donne at one of the launch events for the V&A Museum of Childhood’s capital campaign to reinvent the museum into a creative powerhouse for the young , he remains as passionate an advocate for outdoor play as ever he was a campaigner and activist.

Developmental psychology tells us that play is a critical foundation for learning. It is how as babies we learn to connect with others, explore cause and effect.  It is how we understand that we can have impact on the world, that we can affect change.  In ‘Einstein Never Used Flashcards’, Professors Kathy Hirsh-Pasek and Roberta Michnick Golinkoff explore and expound on the critical role of play in language development. To play is to become fully human. Play is a mode of creative experimentation and exploration, a mode in which we explore cause and effect of our actions and begin to create ‘causal maps’ as ways of understanding that we can act upon the world.  Back to Gopnik, who describes early childhood as being the ‘R&D department of the human species – the blue sky guys, the brain-stormers’, a period in our lives when we are neurologically ‘uninhibited’ and can freely explore the ‘what ifs’ and ‘how might we’ of our imaginative worlds. This chimes with the way designers think and work in exploring the realm of the possible and reifying ideas into material or experiential form. Given just how radical a rethink we now need to create a post-Covid world in which all can flourish, and what we know about the damaging impact of school closures on children and young people’s learning and emotional well-being, nurturing and harnessing the potential of that R&D department has never been so critical. And one of the best laboratories for that R&D is the playground. How much I look forward to putting my camera aside, seeing the barrier tape removed, the swings unfurled and the roundabouts spinning, hearing the high chatter, the whoosh and the whirl of outdoor play once again.