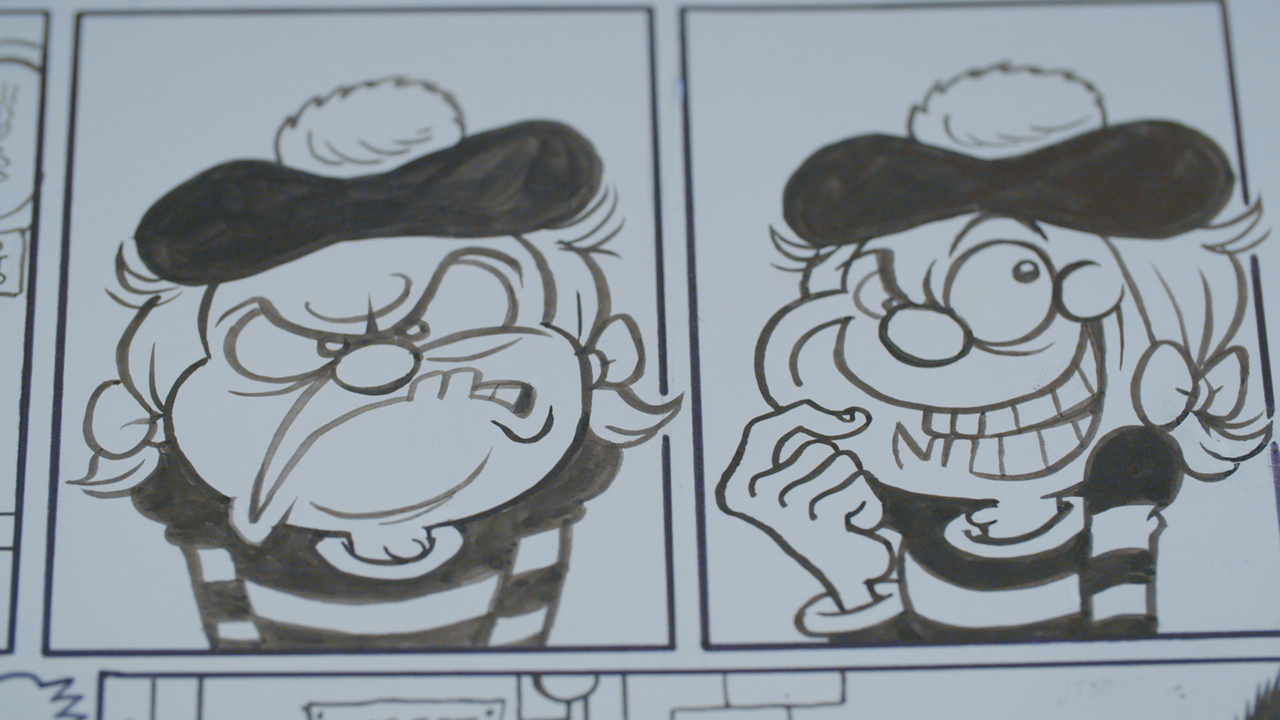 Few museums can boast a collection as unique as ours. From a monolithic chunk of brutalist architecture, to a bionic limb and a comic strip from the Beano, episodes 2 & 3 of Secrets of the Museum delved a little deeper into our stores to reveal some lesser-known, even surprising objects.

The Beano’s Dennis the Menace has been a household favourite since 1938. One of the most mischievous characters to come out of Scotland, he’s also been on display at V&A Dundee since the museum opened in 2018. But now, Dennis is making way for his female counterpart, the rebellious red-head Minnie the Minx, drawn by the Beano’s first-ever female illustrator, Laura Howell. Find out more about the Beano at V&A Dundee.

Over in East London, we get a sneak peek at one of the V&A’s most sizable and unusual acquisitions. Completed in 1972, Robin Hood Gardens is a defining example of Brutalist architecture and social housing, designed by Alison and Peter Smithson. Redevelopment of the area meant the building was recently demolished, but not before the museum acquired a three-storey section – both the exterior facades and interiors of a maisonette flat – which is being resurrected and prepared for open display at the new V&A East Storehouse. Read more about Robin Hood Gardens here.

Meanwhile, a suit with a difference has found its way to the V&A’s costume collection. This plain white suit was designed – and worn to the Oscars – by acclaimed British costume designer Sandy Powell, where it became a wearable autograph book, signed by the likes of Billie Eilish and Joaquin Phoenix, Brad Pitt and Leonardo DiCaprio. The signed suit was then auctioned to raise money to preserve the Dungeness home of the late film director and gay rights activist Derek Jarman. Explore Jarman’s theatre and costume designs in our collection, or try our Out in the Museum gallery trail.

Another spectacular suit – this time a shiny pink lamé number, made in 2017 by rising fashion star Harris Reed – is being acquired for the Fashioning Masculinities exhibition. This is just one of several innovative contemporary menswear, and gender-fluid, designs featuring in the exhibition, and online. You’ll find others from the likes of Edward Crutchley, Rahemur Rahman and Samuel Ross in our current exhibitions playlist.

Episode two also reveals lesser-known works by famous names, John Constable and Carl Fabergé. A rarely seen Constable oil sketch, Autumnal Sunset, 1812, tells the little-known story of Constable when he was a landscape-painter struggling for recognition. More secrets of Constable’s sketching technique are revealed online. Carl Fabergé is best known for his bejewelled Easter Eggs, but there’s more to the master goldsmith. If you enjoyed seeing his exquisite Art Nouveau cigarette case, take a look at his animal menagerie, or discover seven things you might not know about Fabergé.

Another much-loved designer is Eric Ravilious, whose Travel Tea Set is being newly acquired by the museum. Eric’s granddaughter, our very own curator Ella Ravilious, travels to the V&A’s Wedgwood Collection in Stoke-on-Trent, to explore the Wedgewood archive. Check out more from our Ceramics collection here.

Lastly, the bionic ‘Hero Arm’, an impressive 3D-printed prosthetic arm for a child, is being acquired for Young V&A. The Arm will take pride of place in the Design gallery of the new museum. If you enjoyed this story, head over to our blog to hear more from Curator Trish Roberts on why children make great designers.

Episode 4 of Secrets of the Museum will be available on BBC iPlayer from Wednesday 20 April at 8pm.