Every woman to do her duty. Yes Ladies – now is the time to take up your needle and with patience and perseverance communicate your loyalty, patriotism and commitment to proving that we are not idle whilst our men are away. We should follow our sister’s example – reflecting our pride in our nation, celebrating our victories whilst acknowledging the loss of our menfolk.
All this is of course a preamble to another story. I have always been intrigued by the George III coverlet – the sense that it is perhaps two projects.  One the intricate piecing over papers to create segmented circles, some reminiscent of the mariners compass design.  The other, the extraordinary range of pictorial images based on domestic, naval and military scenes inspired by popular prints.  The level of skill employed in making the coverlet is extraordinary, yet one thing jars – the central panel showing the review of volunteer troops by King George III in Hyde Park has been inserted into the patchwork ground, cutting through the pieced representations of the sun and the moon. Despite our best efforts we have been unable to date to trace the maker, although our search continues …. 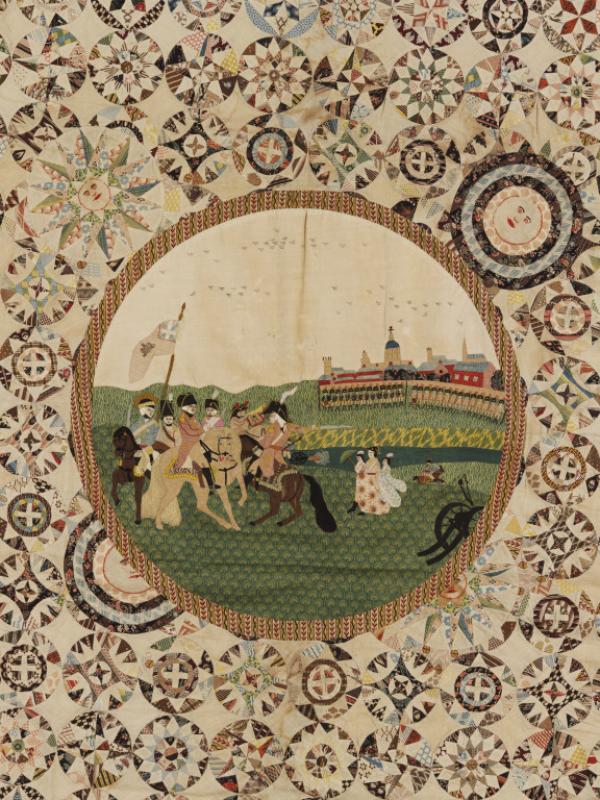 Central Panel, George III Reviewing the Troops, maker unknown, 1803-5
Perhaps more intriguing than the piecing, the design and the range of pictorial images employed in the coverlet is the image of a feisty young woman who has stitched her portrait into several of the most pertinent scenes. Who is this woman – so bold, so brave, and so insolent as to stitch herself into history? Why didn’t she simply sign and date the piece like so many before and indeed afterwards? This is not a typical stitcher, content to sit by the fireside gossiping with her companions. This woman, a red haired beauty, has aspirations; her passions aflame with a desire to experience the wider world, a man’s world, where women are relegated to dreams and thoughts of home during the long and lonely hours at sea or on the battlefield. 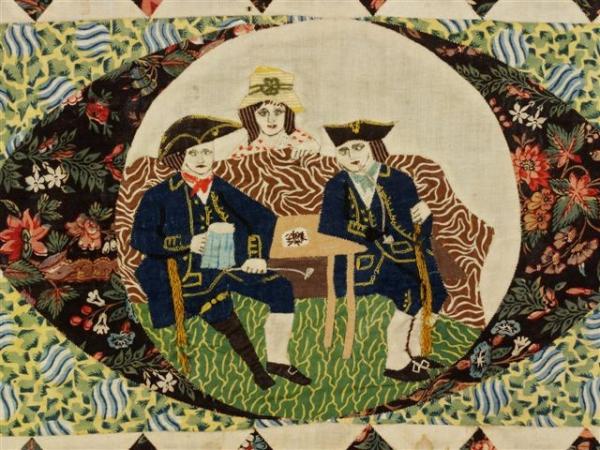 Detail, George III Coverlet, maker unknown, 1803-5
Were her dreams perhaps reality – rather than simply stitch herself into history perhaps she made history, not only as observer but as participant. Was she like Nancy in the ballad of Billy Taylor. Bored of waiting for her nautical lover to return to her loving arms, Nancy took it upon herself to disguise her womanly curves beneath the rough hewn uniform of a tar daubing her ‘lily white hands …. With nasty pitch and tar’. Once at sea she fought as bravely as the men at her side, never once revealing her true sex until a stray canon ball ripped through her male disguise revealing her ‘lily white breast’. What was once concealed, now discovered and revealed, Nancy was summoned before the Captain, where she confessed her quest for her erstwhile lover Billy Taylor. The Captain, full of admiration for this feisty wench could not hold his tongue, Billy Taylor – the rogue, ‘both cruel and severe’ had found love in another’s comely arms. Nancy beside herself with grief and jealousy tracked the couple, ‘whereupon she called for sword and pistol’. Billy Taylor was no more. Saluted by the Captain for her bravery and steadfastness, Nancy was made ship’s Lieutenant and sailed the seven seas.
We have no way of knowing whether the maker of our coverlet did indeed step a dainty foot upon the briny boards of a naval ship.  However her image continues to haunt the coverlet – narrator, observer, chronicler – she has ensured her place in one of the most turbulent periods of British history. 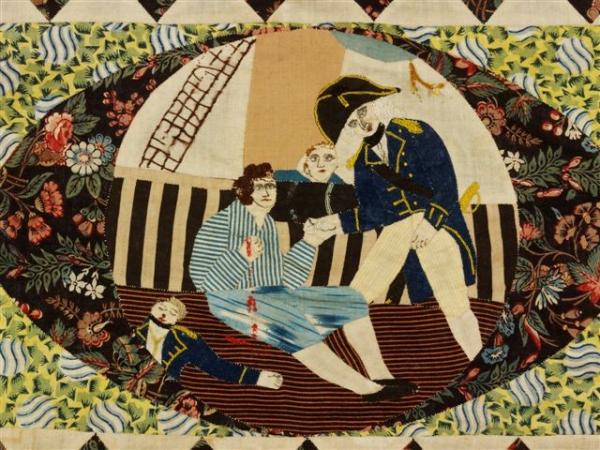 And now the end is near, its time to face the final curtain…

Your dinner is in the dog…

Actually we don't have a dog, although Dobby the House Elf seems to spend an inordinate amount of time goggling images of cute pug puppies. However I am yet again in the...

I've been a bit out of sorts recently - the Muse has packed her bags, tossed her head and matched out of the building without so much as a backward glance. I couldn't think of...