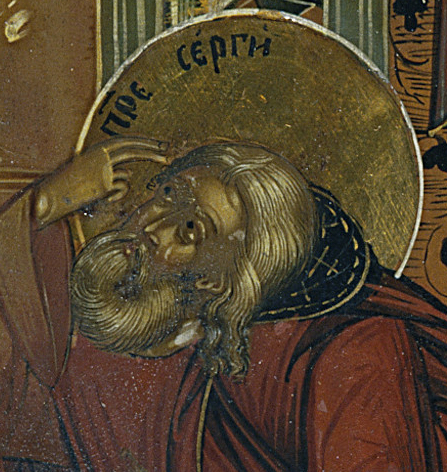 Today, like the BBC north of the M25, we look east, further east even than Norfolk. Give the globe a little twirl to your left and you’ll see there’s a big country which covers a lot of the top bit of it. This country is called Russia, and it’s very famous. Now if you look back toward the left (but stop a long way before you reach Norfolk) then you’re about where you need to be to learn about St. Sergei of Radonezh, who was born in Rostov around 1325. Now that you’re au fait with the Russian nation, you might well suppose that Sergei was in fact probably not a Catholic, and you’d be correct; Sergei is one of the most important saints venerated in the Russian Orthodox Church.

All accounts agree that Sergei was something of a late-bloomer, and struggled as a boy with his reading. Things began to look better for young Sergei after he was visited by an angel and given a piece of holy bread, which he ate, and was thenceforth able to read the Holy Scriptures, thus fulfilling his sincerest wish. However, shortly afterwards his parents, Cyril and Mary, were impoverished after an invasion by Prince Ivan of Moscow. Not the last adventure by a Moscow autocrat.

Sergei, being a good boy, looked after his parents in their dotage and saw them both enter the cloistered life. One of his brothers also entered a monastery, so my feeling is that the whole family had a penchant for beekeeping and for beers of around 14%. It was with this brother, Stephen, Sergei retired into the forest to live in total seclusion. Stephen got fed up with this enforced quality family time and packed himself off to a proper monastery, leaving Sergei alone with the animals, who became his friends. A legend tells that Sergei once shared his last piece of bread with a bear who entered his hut.

Eventually, as often happens with these kinds of hermit, people heard about his exceptional holiness and wisdom and came to visit him. A small religious community grew up around Sergei’s cell, but disagreements arose and Sergei split off to form another, more regular, community. By the end of his days Sergei had founded more than 40 new monasteries, often in the most remote and inaccessible places his followers could find, to better offer themselves hardship and seclusion (sometimes you just have to be glad that you’re a miserable atheist).

Sergei carried out his good work until his death in 1392. His body was found in 1422 to be miraculously preserved, which paved the way for his canonization in 1452. Sergei was far from a showy saint, and is mostly revered for his humble piety, leadership and honesty, rather than learning or preaching.

The saint is depicted here on a 19th century icon, experiencing a vision of the Virgin Mary with saints Peter and John. This episode is said to have taken place toward the end of his life, while visiting the monastery of the Holy Trinity in Radonezh. Sergei is the bearded fellow kneeling on the ground in supplication. Behind him is his successor as abbot of the monastery, St. Nikon.