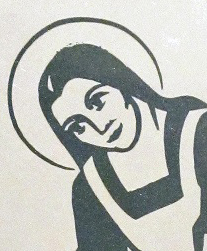 Today is the celebration of one of Catholicism’s less flamboyant but more popular saints, St. Theresa of Lisieux, commonly known as the ‘Little Flower of Jesus’. Her saintliness is not a result of holy pillows, levitations, stigmata or loyal animal friends, but rather it is because of the quiet, sweet and serious way that she went about being a nun.

She was born in 1877, one of four sister who all became Carmelite nuns. Theresa entered the convent aged just 15 years old, and was so holy that at 22 she was chosen to be assistant to the novice mistress. She performed her contemplative duties perfectly and was particularly devoted to the Holy Face of Jesus. She aspired to missionary work in Vietnam, a dream that was scotched after contracting tuberculosis in 1895. She lived out her last years in quiet humility, writing a spiritual autobiography which was later translated into a number of European languages, and some Asiatic ones. It was the popularity of this work which was the foundation for her eventual canonisation, and ca great many miracles and saintly intercessions have been claimed since her death. 13 years after her death she was exhumed and found to have the ‘Odour of Sanctity’, a sort of Holy fragrance that some saints have, which further helped to convince the Vatican that she was worthy of sainthood.

Theresa was canonised in 1925 only 28 years after her death, and was raised to joint-patron saint of missions (along with St. Francis Xavier) in 1927. Even more impressive was her elevation in 1947 to the co-protectorship of France alongside the illustrious Joan of Arc. She is also patron saint of florists, orphans, tuberculosis-sufferers and Alaska.

Theresa is shown here on a lithographic print, doing her laundry. The print was designed by Ade Bethune (1914-2002), an important individual in the Catholic Worker Movement, a community which defines itself through the simple piety of manual labour, based on the precedent of Jesus’ occupation as a carpenter. This card is one of a number acquired by the Museum in 2007, produced by the Blue Cloud Abbey in South Dakota, which subsequently closed in 2012 due to a lack of new recruits.