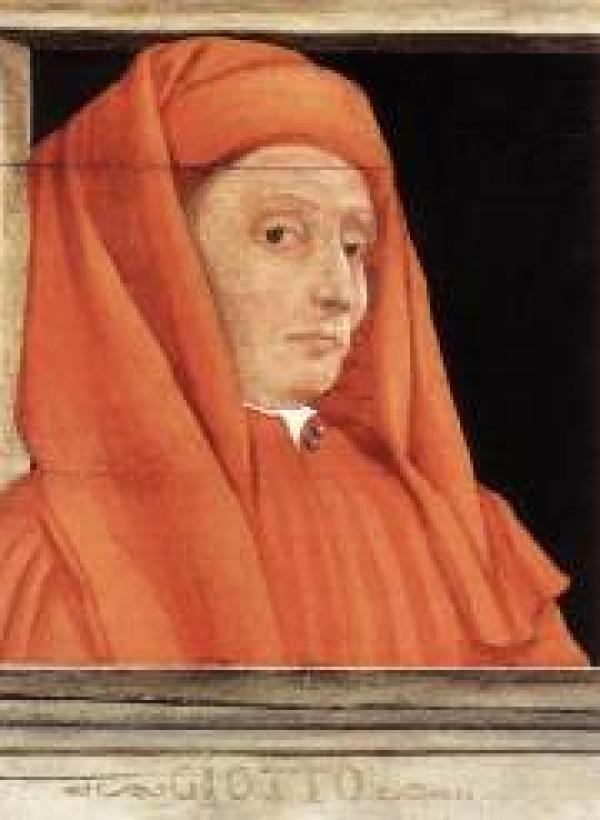 In my 2007 book Thinking Through Craft, I related the story of ‘Giotto’s O,’ told by Vasari in his Lives of the Artists, as a way of talking about skill. It’s a good enough anecdote to repeat here. Pope Benedict IX, having heard of Giotto’s fame, sent a courtier to seek him out. When the painter was found, the courtier asked for proof of his skill. According to Vasari:

Giotto took a sheet of paper and a brush dipped in red, closed his arm to his side, and with a twist of his hand drew such a perfect circle that it was a marvel to see. Then, with a smile, he said to the courtier: ‘There’s your drawing.’ As if he were being ridiculed, the courtier replied: ‘Is this the only drawing I’m to have?’ ‘It’s more than enough,’ answered Giotto. ‘Send it along and you’ll see whether it’s understood or not.’ As a result, the pope and many of his knowledgeable courtiers realized just how far Giotto surpassed all the other painters of his time in skill.

Try doing a circle freehand and you’ll see that no amount of practice will get you to the point of doing it perfectly every time. It’s as simple a test of hand skills as you could have. 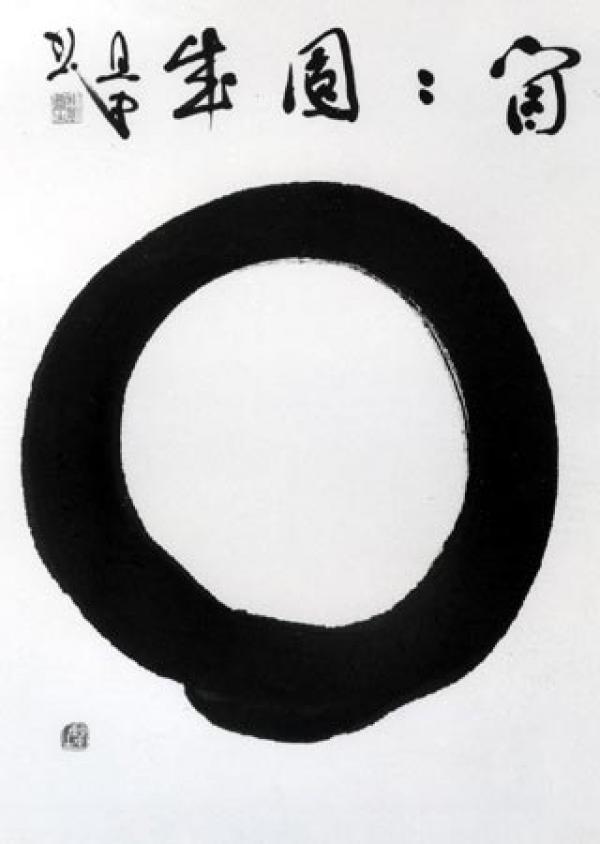 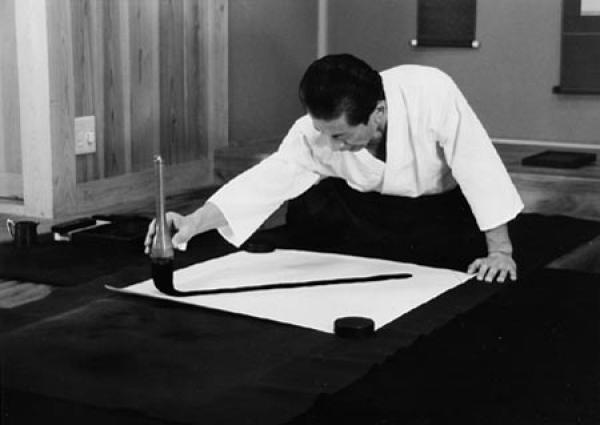 Japanese Zen calligraphy is famous for its circles. These are intentionally asymmetrical, but they still seem to capture the essence of a singel gesture in the same way as Giotto’s legendary O. Above is an example by the contemporary master Tanchu Terayama (seen at left). The inscription at the top of the drawing reads ‘Each Thing is Perfect.’ Looking at Tanchu’s quick but skillful circle, you can almost feel his brush dragging across the paper. And that brings me to my real subject – the live action sketch.

So far in this blog, I’ve focused mainly on sketches as finished works, which may or may not lead on to other designs. But drawing is an active process, and it can be considered a performance, just like any craft. A favourite example of mine is a series of drawings by the Toronto artist Gord Peteran, which were made on a lathe. Usually this is a tool for shaping wood or metal into round forms, like bowls. But Peteran decided to repurpose it as a drawing tool. Here are the two of the five drawings he made. 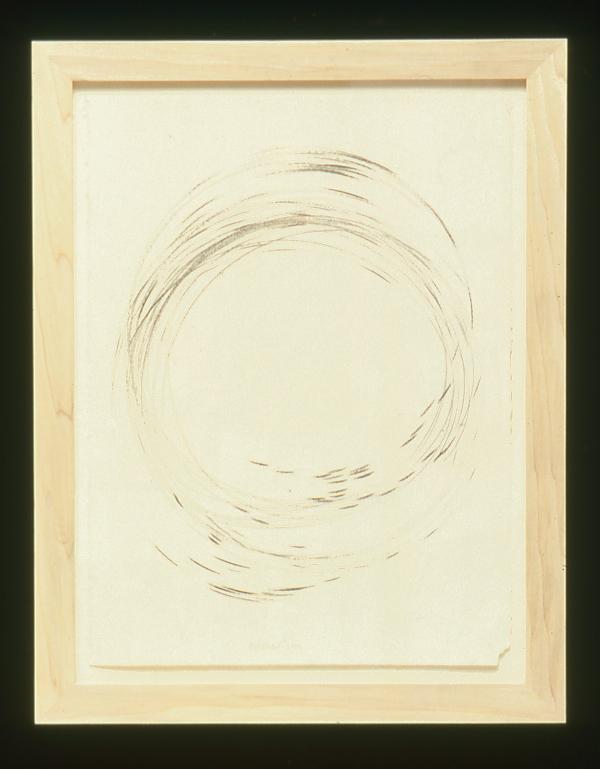 The first one (on the left) was made simply by mounting the paper on to the lathe and placing his pencil against it repeatedly, as it spun. That process resulted in a hazy circle, very meditative and quiet. The other drawing (right) was made in the opposite way, with the pencil mounted on the spinning head of the lathe. Peteran tried to hold the paper still against the point, but of course that was impossible. The result is a haphazard set of arcs, with the paper torn through in some places. The two drawings produce opposite aesthetics – one is restful, the other aggressive – even though the only thing that changed was the relative position of tools and paper.

A final example which beautifully dramatizes the ‘live’ action of drawing is this clock by the Dutch designer Maarten Baas. 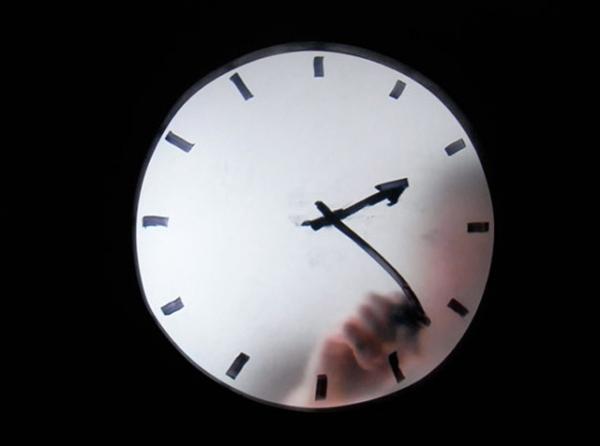 Best known for his burnt antique furniture series Smoke, which was featured in the V&A exhibition Telling Tales, Baas has recently done a series of clocks entitled Real Time. In the example shown above, a performer continually draws and erases the hands, keeping time accurately. It seems to me a quietly political piece, perhaps referring to the way a factory hand has to ‘clock in and out’ at the beginning and end of the day. This is still more explicit in another work in the series, in which the ‘sweep’ of a clock’s hands is performed by two uniformed janitors pushing piles of dust with brooms – a sort of proletarian version of Indian sand painting. 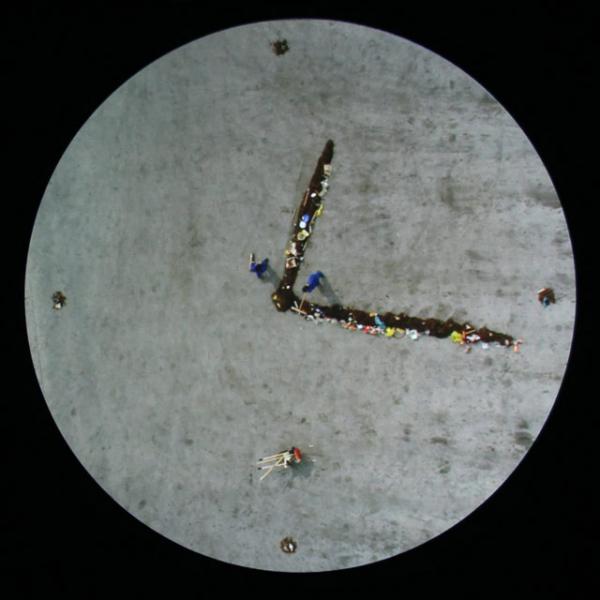 Baas has found a way to bring Giotto’s O up to date. Instead of the genius of the Renaissance artist, we have faceless workers keeping an exact record of the endless round of their own work, as so many people in the world must do. Yet Baas has found a way to instill this process with the dignity of human touch – which I guess is what Pope Benedict was hoping to get from Giotto in the first place.