2011 is almost here, and in September the exhibition Postmodernism: Style and Subversion 1970 to 1990 will finally open to the public. It’s been a real pleasure to work on the project throughout, but never more so than in the past few months. This past autumn the V&A team – myself and co-curator Jane Pavitt, assistant curator Oliver Winchester, exhibitions officer Rosie Wanek, and many other staff members – began working with two outside design firms. The 3D aspects of the show are being handled by architects Carmody Groarke (named for the firm’s two principles, Kevin Carmody and Andy Groarke). The graphics are being designed by A Practice For Everyday Life, or APFEL, led by Kirsty Carter and Emma Thomas.

We’ve now finished the first two phases of the design process – which we designate as ‘Concept’ and ‘Scheme’ stages. This brings us to the point where every text panel, platform and display case, and most of the big objects, are set in place; all the major artistic and curatorial decisions have been made. What remains is fine detail work – arranging objects within cases, fine-tuning elevations – and of course getting it all built.

This seems like a good time to reflect on the design process, and in particular the use of sketches and models in working out the ideas for this complicated exhibition. So this will be the first in a series of five posts I’ll be writing on the subject – beginning, here, with concept sketches. In other posts I’ll focus on model-making, graphics, lighting, and finally, a ‘case study’ of the exhibition’s most complicated piece of stagecraft – a centerpiece gallery that we are calling The Club. 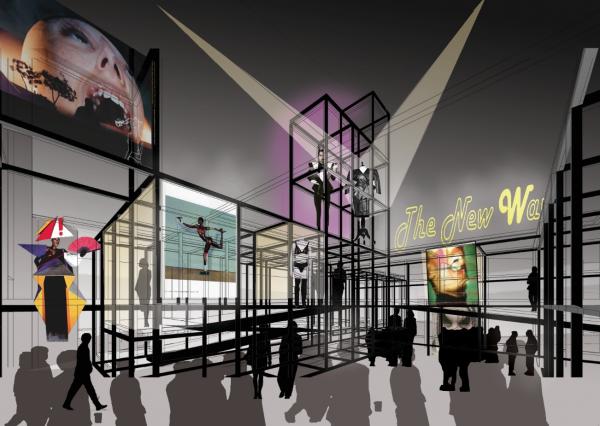 The first thing you realize when you begin working with an outside designer is that you are a client, as well as a collaborator. The relationship with Carmody Groarke and APFEL began with a “pitch,” in which they presented their ideas about the show based on a brief that Jane Pavitt and I had written. (Several other 3D/2D teams also participated in the pitch, and all were interesting, but of course we could only go with one.) One of the images that got our designers the job is the above rendering of The Club – a space devoted to postmodern performers like Grace Jones, David Byrne and Klaus Nomi. I’ll say more about this gallery in a future post, but at the moment I just want to point out how well their drawing works rhetorically (that is, as a persuasive image). They show us that they’ve considered the images we chose, and imagined an exciting setting for them. The rendering includes subtle clues to the designers’ professionalism (like the layered grey figures of the audience, which shows they know the’re designing for crowded galleries not empty ones). They emphasize the integration of graphics – text and images – into an architectural structure, giving us confidence that the two outside design firms will work well together. Most importantly, the image is dramatic without being too specific – it gives the sense of a powerful “look” but lets you imagine how you, as a curator, might work with the designers to fill the space. 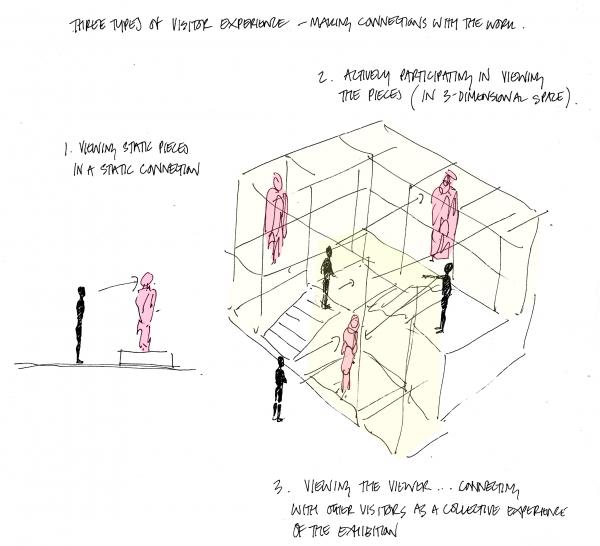 Most of the concept sketches presented by Carmody Groarke were even less specific, outlining design principles rather than real proposed spaces. The above drawing seems like a simple cartoon, but it’s actually a complex bit of spatial thinking. On the left is a conventional viewing situation: visitor staring at object on plinth. On the right is the much more dynamic situation of visitors navigating a space in which they look up and down, not only at objects but also at one another. If you look back up at the concept sketch for The Club you’ll see how they put this principle into practice.

The same use of sketches is also seen in the below images, which were also included in the pitch proposal. They show how a rectangular gallery (like the ones at the V&A) can be broken down into diagonal ‘vectors’ which are more interesting to inhabit than orthagonal blocks, and which are also appropriate to the fragmentary design aesthetic typical of postmodernism. 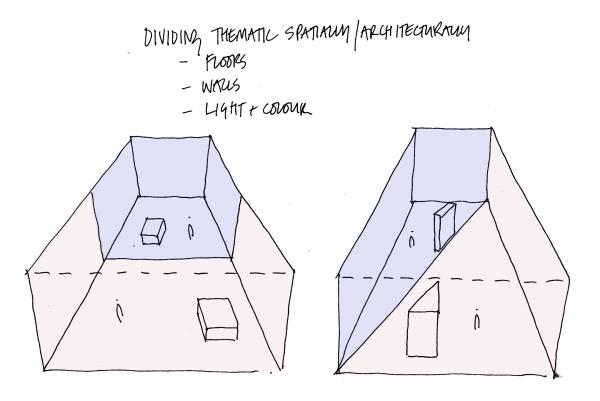 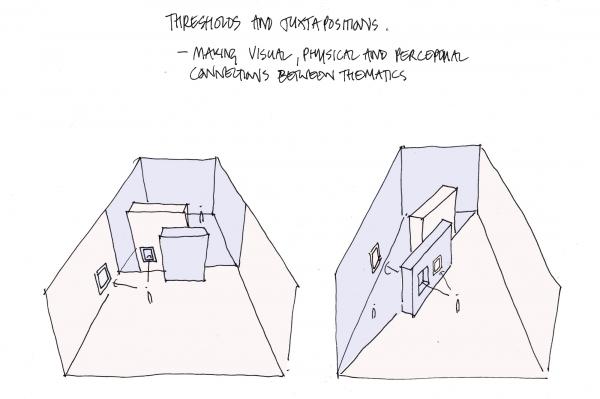 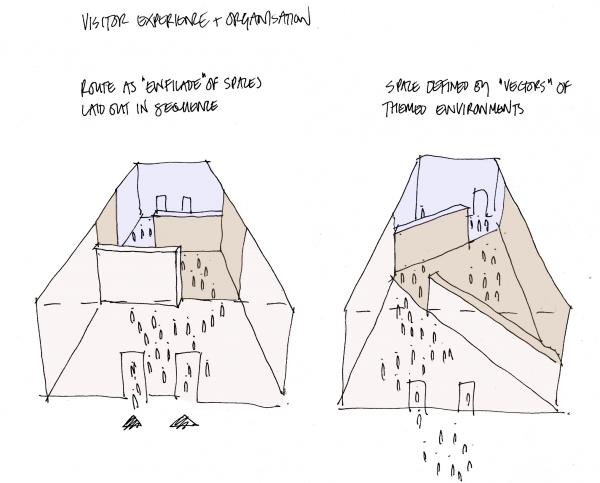 These sketches are not quite as dramatic, of course, but they are very clear. The goal here is to introduce vocabulary (like the terms “thresholds” and “vectors”) that will serve as a basis for reaching agreement on the design approach. If the V&A team and the designers are all signed up to this concept from the beginning, it will eliminate lots of uncertainty from the process.

A concept plan presented at the “pitch” shows the vectors laid out into the plan of the first room – note the effective use of colour. 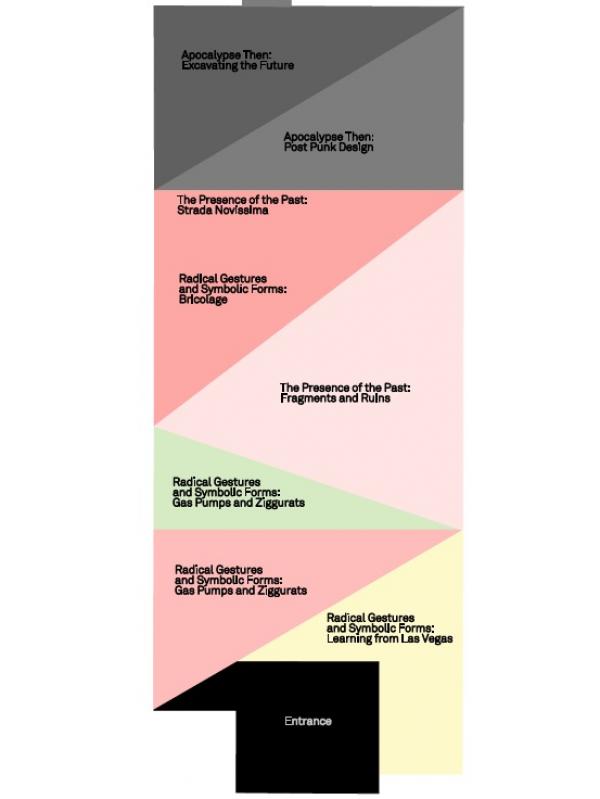 Remarkably, after several months of work, the final floorplan has remained exactly the same as this initial rendering.

A final point about working with designers is that – as you might expect – they think mainly in visual terms. While my co-curators and I tend to think using titles and verbal description, our designers always have a pen in hand and a sketchbook open in front of them. As we work through ideas, they rapidly draw possible solutions – their craft skill of immediate and evocative draftsmanship is intrinsic to our working relationship. Below is an image showing how trace paper can be overlaid on the existing floor plan to try out small variations. I think it gives a great sense of the design conversation in process – a bit messy to look at, but also a very effective mode of communication. 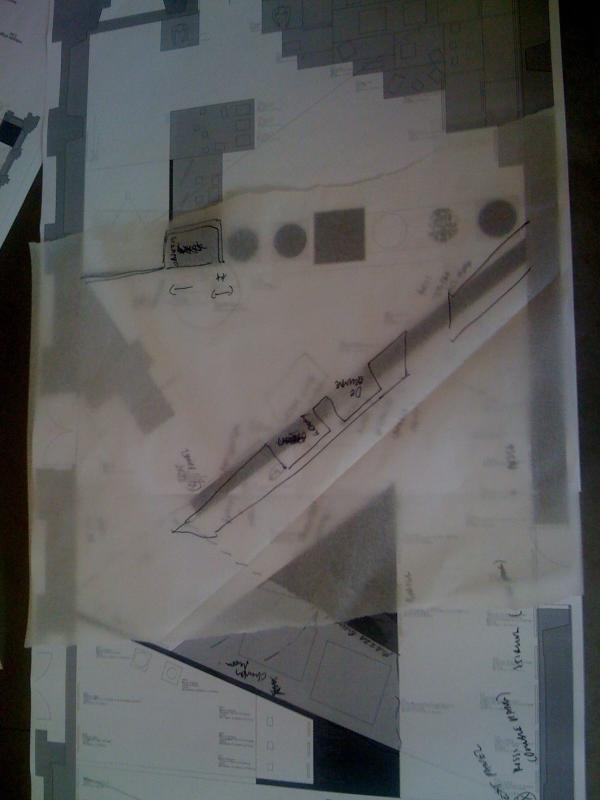 One final sketch from Carmody Groarke is halfway between a concept drawing and a technical drawing. It shows how the structure of The Club might be realized using scaffolding lashed together with Perspex sheets, giving both a view of a typical unit from above, and the cumulative effect that might be realized in a perspective elevation. 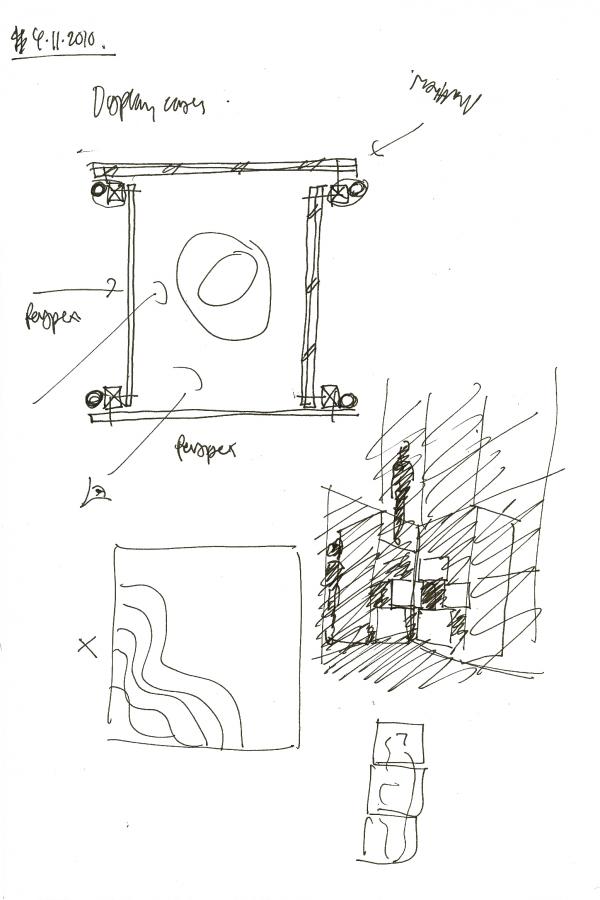 It’s a fast sketch, but communicates so much about the design approach – not only how the structure is held together but retaining something of the atmosphere that was captured in that first, much more complicated digital rendering of The Club. It’s in this constant process of drawing and re-drawing, in many different media, that an exhibition is being made.