Stripes: the simplest design in the world, right? All you need to do is draw straight lines, over and over, and fill in the spaces between. In the below 18th century technical drawing for a Lyon silk, for example, the designer had to work hard to render the flowers and landscape  vignettes. The stripes came easy by comparison – in fact, they almost seem like they were generated automatically by the crossing of warp and weft threads in the fabric. 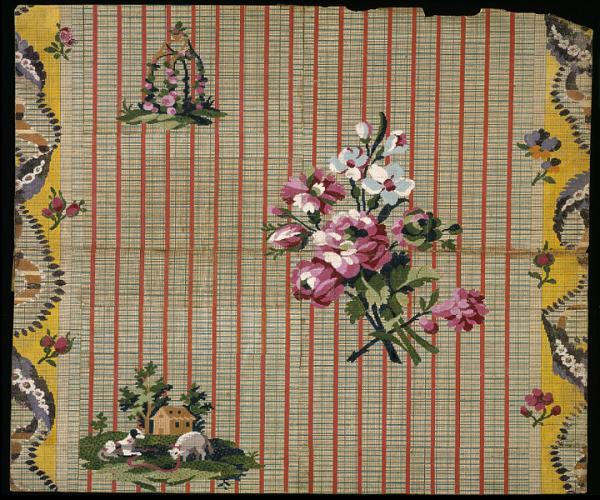 But like any other basic design procedure, it’s possible to raise stripes to a fine art. One way is through sheer complexity. The below textile design, made about 150 years later than the Lyon silk, was drawn by Gunta Stölzl, technical director of the weaving workshop at the Bauhaus. By multiplying, slanting, and varying the thickness of her stripes (and scattering some other elements amongst them) she created a design of tremendous complexity and visual interest. 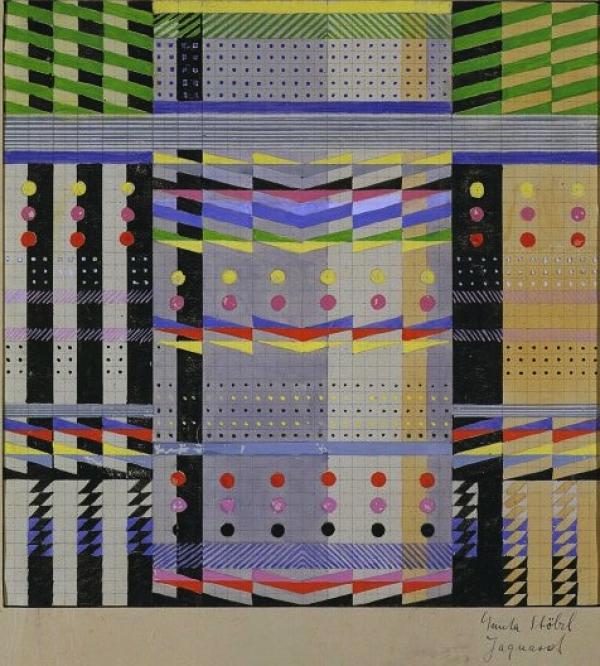 Maybe there’s something to the idea that stripes are the natural motif of textile designers. Painting provides an interesting contrast. To get stripes on to a canvas, you have to use some form of masking or stencil. While textile stripes are part of the structure of the weave, painters have to work hard to achieve a perfectly straight pattern. Piet Mondrian roughed out his paintings in tape before ever picking up his brush (in fact, according to American art historian Nancy Troy, there were ‘taped up’ paintings in his studio when he died, which were  completed by the executors of his estate and then, controversially, sold as originals). In the painting at below right, you can see how he imitated the loose end of the tape in the finished painting. 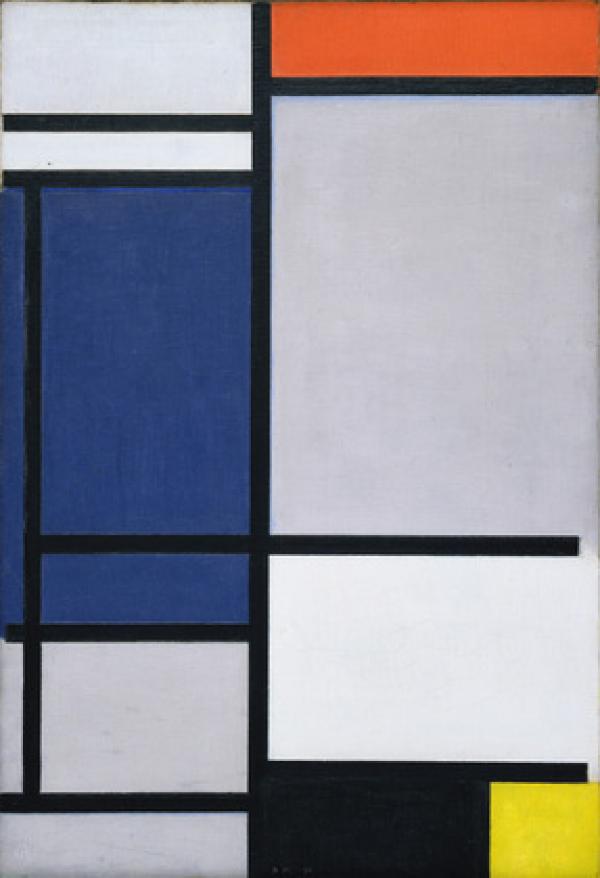 Mondrian and his colleagues in the DeStijl movement were never interested in making a painting that was made only of stripes – presumably, they’d have regarded that as mere pattern, not sophisticated abstraction. But how wrong they were. In the 1960s, artists associated with the Op Art movement exploited the regularity of stripes – the very thing that might make them seem dull – to make images that seemed to vibrate, simply by carefully calibrating the colours of each stripe. 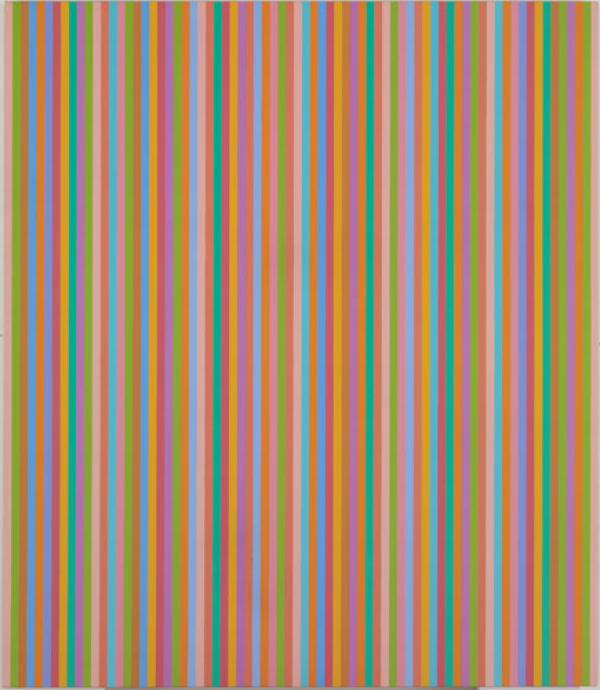 Making these paintings took extremely careful planning. Bridget Riley, who made the above preparatory study (to the left) and a similar painting entitled Ecclesia (to the right), has written about the process of designing these works:

Each band has a clear identity. Step back and the colours begin to interact, further away still a field of closely modulated harmonies cut by strong contrasts opens up. I had to work simultaneously on these two levels: the physical identity of the painted colours and the visual experience of their relationship. I used cut bands of painted paper in a collage technique to adjust, change and move colours around.

As Riley indicates, the process of designing stripes can be almost infinitely complicated when colour is involved – an opportunity for endless play. Gene Davis, another of the early Op Artists, has made a whole career of nothing else. (He’s sort of the Paul Smith of painters.) Here are a preparatory study and a painted canvas by Davis, which show how his very direct first stage –  drawing single lines with a felt-tip marker – was translated into a much more laborious, exacting finished product. 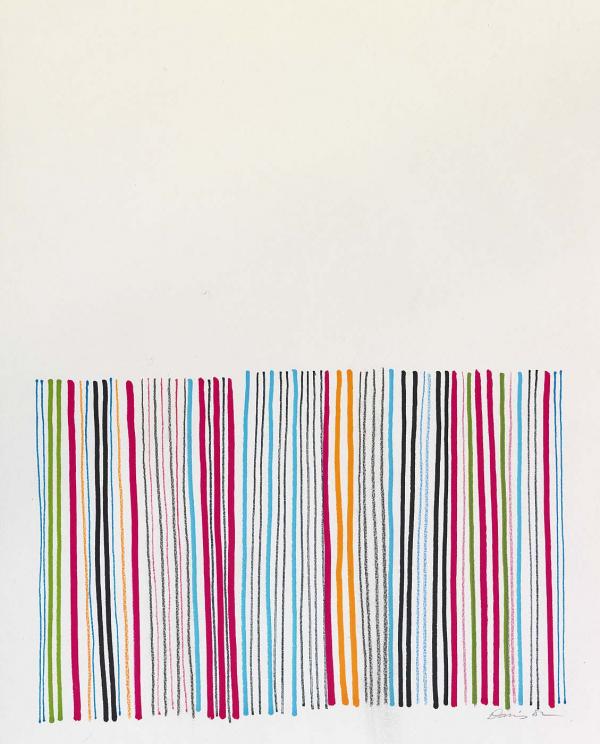 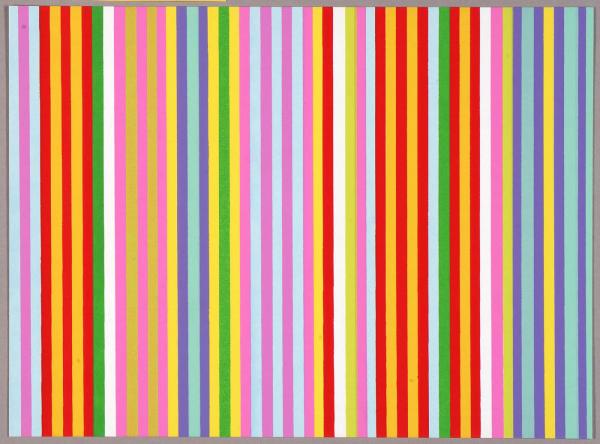 An especially dramatic instance of this leap from sketch to product is seen in the drawing for a major installation work, Niagara (1979), which has got to be one of the only beautiful parking lots in the world, and maybe one of the biggest paintings too. Yet Davis’s original sketch is charming in its simplicity. 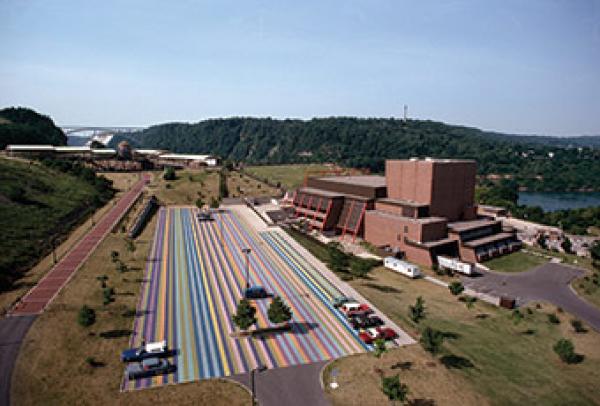 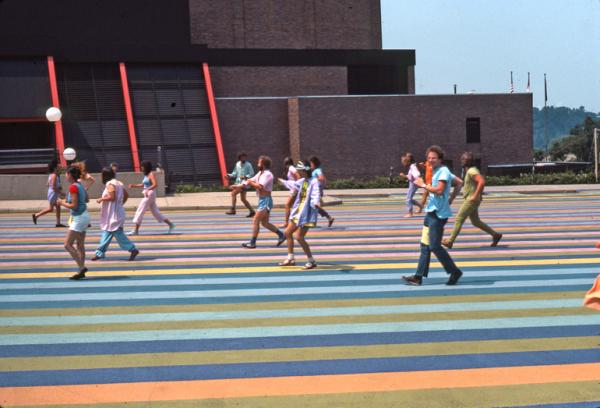 The Op Artists, like textile designers of earlier eras, didn’t necessarily make a feature of the physical leap from sketch to finished product. But that’s another thing stripes are great for. They can help an artist dramatize the physical realization of a pattern, because any variation from the progression of lines is so striking. Here’s an example of this approach by the British artist Ian Davenport. 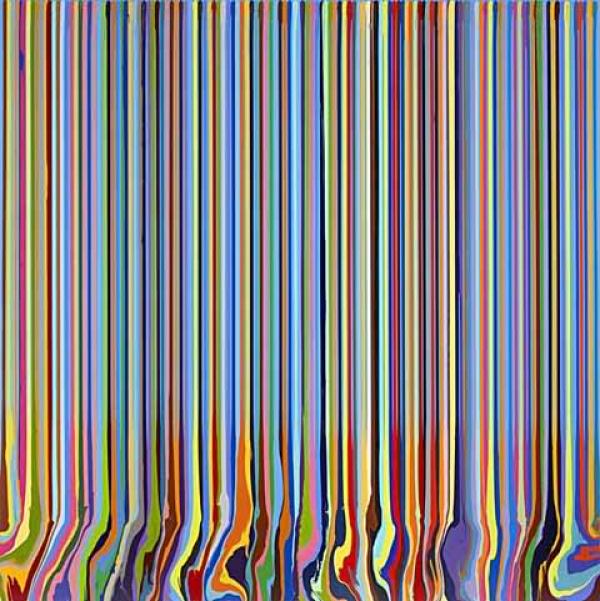 And here are two works by Jim Lambie, who takes the traditional use of tape as a way of planning out a striped pattern (as practised by Mondrian) and turns it into an installation art medium – as in this staircase he made at MoMA in New York. 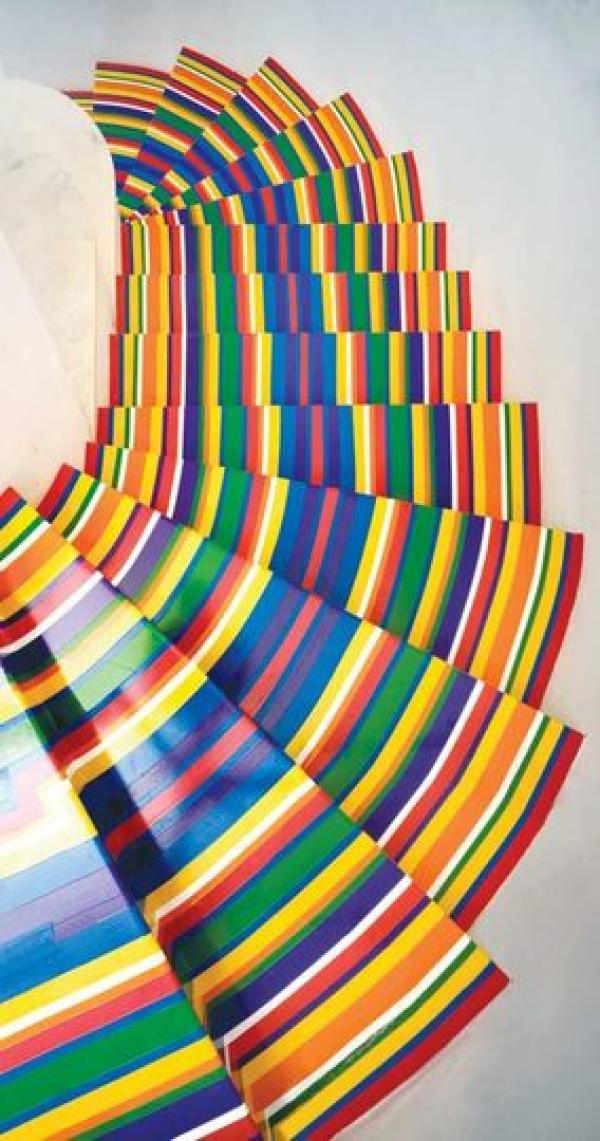 And here is a more sardonic example, by the architect Rem Koolhaas. Back in 2001, he envisioned a new flag for the European Union – lining up the signature colours of all the member nations edge to edge. In this case the emphasis is not on the physical rendering of the stripes, but rather the way they can hover between a symbolic and a purely abstract effect. The result ends up looking like a bar code – another stripe pattern of great visual simplicity but tremendous real-world power. 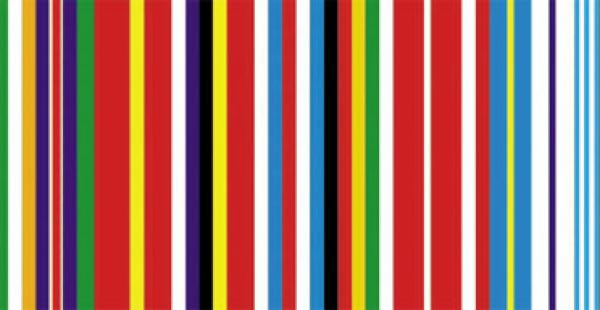 Finally, here’s a recent project by the American artist Anne Wilson, which brings us full circle to weaving. Though she inspired by 1960s paintings by the likes of Riley and Davis, Wilson is also interested in the real histories of production – especially in textiles. For her recent exhibition Local Industry, shown at the Knoxville Museum of Art, she set out piles of thread and invited the public in. Unskilled visitors were taught to wind bobbins. 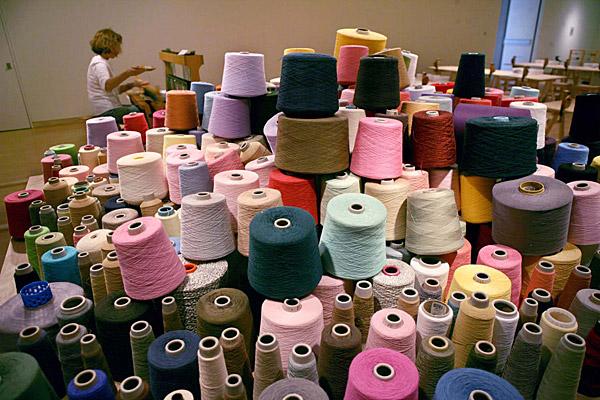 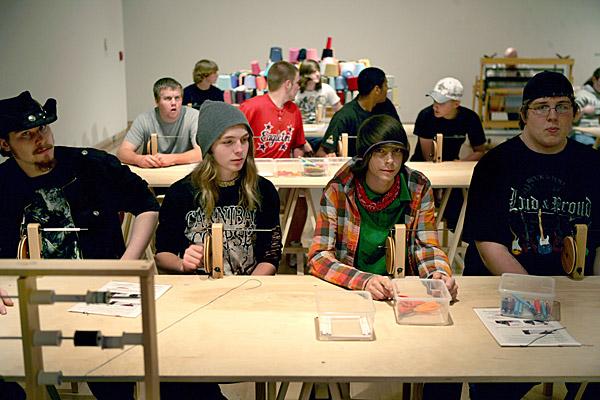 Those more experienced with weaving were asked to sit at a loom and weave a single cloth, stripe after stripe, choosing the colour and thickness of each one themselves. 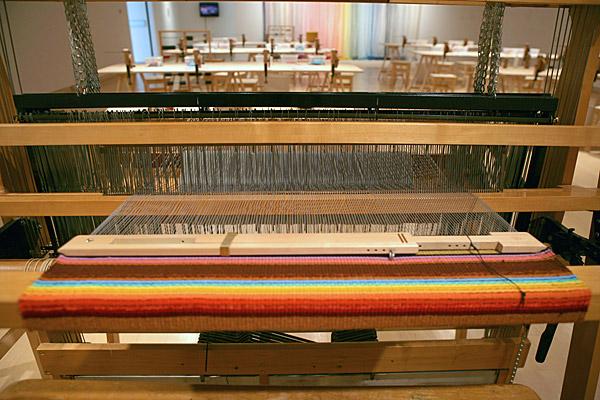 The result was – you might say – a group portrait of Knoxville, a city in Tennessee with a long history of textile trade (recently dramatically contracted due to outsourcing overseas). 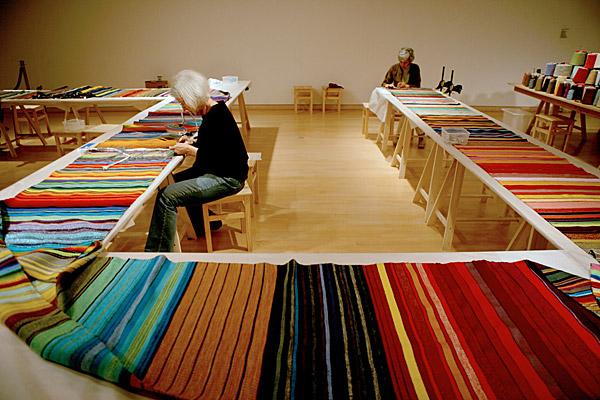 In this work, Wilson takes advantage of the simplicity of stripes: so easy that anyone can do them. It’s just this self-evident quality that gives them so much potential. Give an artist something obvious, and you’ll get a surprise every time.