This guest post has been contributed by Jenny Saunt.

As a second-year student on the RCA/V&A History of Design MA course, I’m currently in the thick of dissertation research. My subject of study is stucco of the seventeenth and eighteenth century. If you are not yet acquainted with the glories of ‘stucco’ or ‘decorative plasterwork’, here is a fine eighteenth century example from the Royal Fort in Bristol. 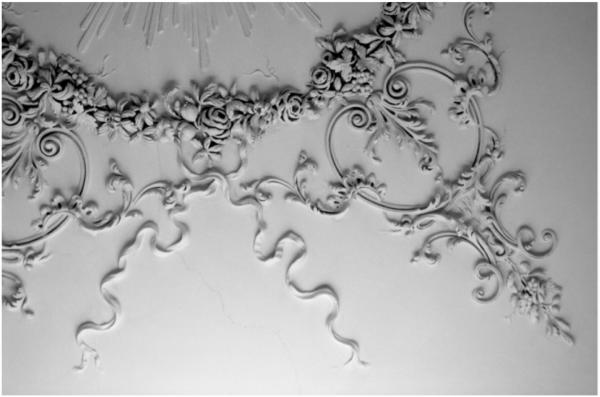 Designs for stucco schemes from the seventeenth and eighteenth century do survive, but the exact role of these drawings is sometimes unclear. A 1763 William Chambers ceiling design (below) in the V&A collection is a good example of a ‘finished’ design drawing. It would present well to a client, and give a clear impression of what they could expect to end up with. But, how much use would a drawing like this be to a stuccadore who actually had to make a ceiling? 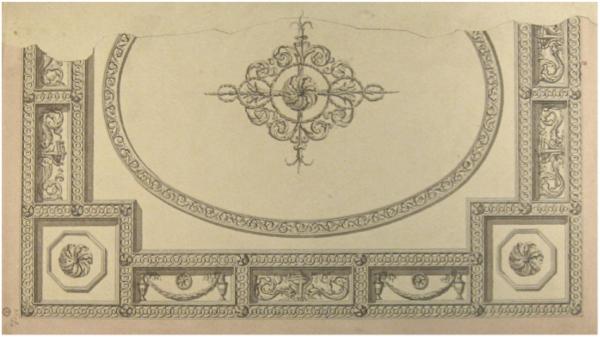 Once you start looking for the type of detail that might be needed by the artisan, you realise that a drawing like this would not be much practical use beyond giving you a general outline of the scheme. The same problem exists when you look at less ‘finished’ drawings, which brings me to the V&A’s Matthias Lock album. Lock was a designer who published designs in the second half of the eighteenth century, and this album holds an assortment of his drawings. Some of these have a reasonably high level of finish whilst others are the most tentative of sketches. The design below could be taken as a suggestion for a stucco overmantle or wall decoration. 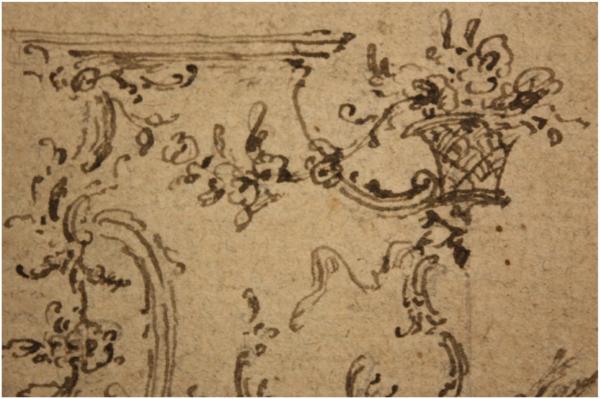 If you were to approach this drawing as a stuccadore, intending to recreate it in physical form, it would not really provide much information. If we take the basket of flowers from the top right hand corner of the drawing as an example, it is clear that this particular collection of wiggly lines is a basket of flowers. However, it does not give much away. 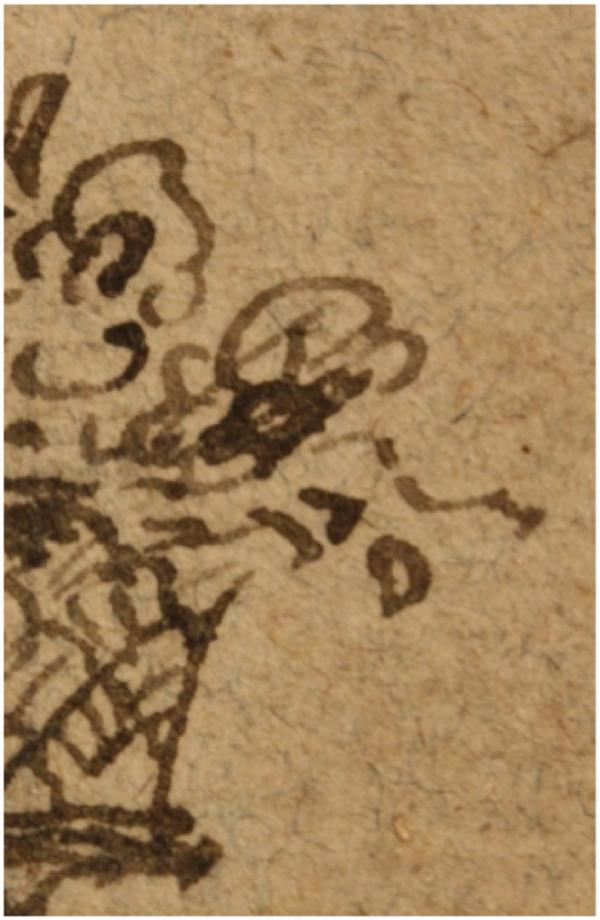 For instance, if the drawing on the right was a design for the stucco on the left, who decided how many petals each flower should have, how many leaves to add, or what fruit was to be included? The piece of stucco on the left is from Poltimore house in Devon. It is about 50cm in height, it is full bodied and holds a lot of detail. The drawing of the basket is a few cm high, so the leap in scale is enormous.

Drawings which may be suggestions for stucco schemes, are relatively easy to find, while drawings that address the detail are not in great supply. Of course a lot of drawing may have happened ‘on site’ which could explain the lack of survivals (assuming that an eighteenth century building site was as dusty, damp and busy as today’s are) . But another possibility is that they may never have existed at all. The role of the plaster worker may have been to take the drawing presented to the client and translate it in to the finished piece – effectively sketching the work in plaster, or ‘drawing’ in three dimensions.

The fantastic thing about stucco, which is often misunderstood or overlooked, is that it is all hand modelled. No moulds are used. The forms are built up in a material that sets over the course of a few hours, so when you start working with the mixture it’s very malleable. 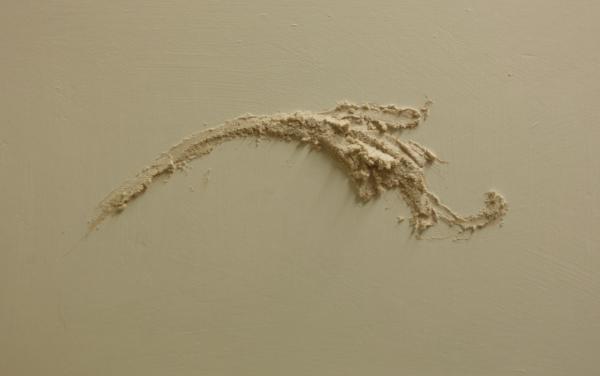 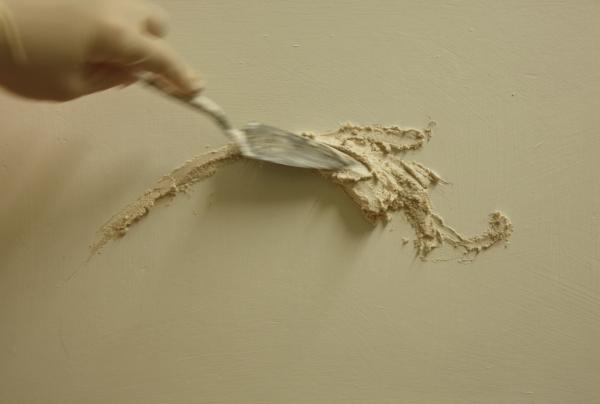 You stop working on it when it refuses to move anymore. The first stage is to make a rough form in coarse material (the core), and the second stage is to finish the form with a much finer mix (set coat). 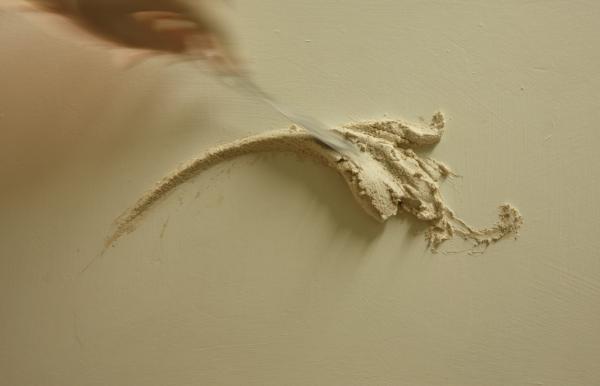 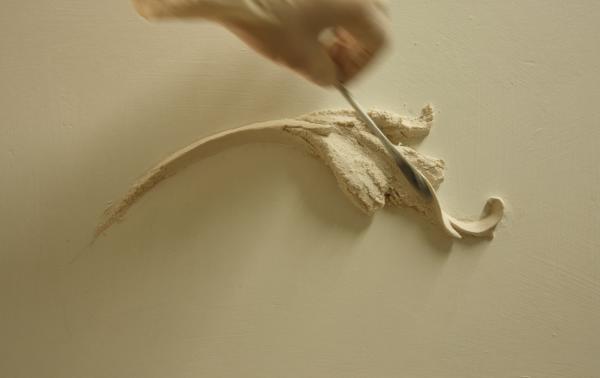 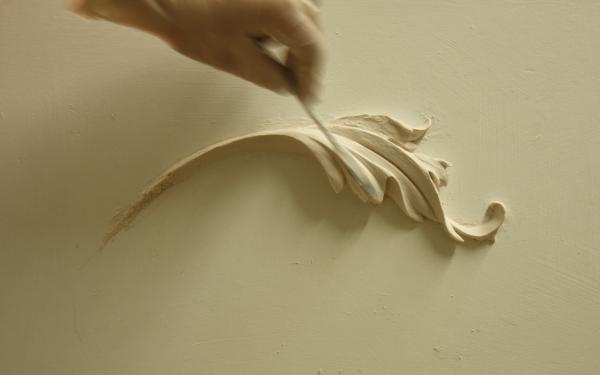 Metal hand tools are used to shape it and once it is properly dry it is pretty tough stuff. 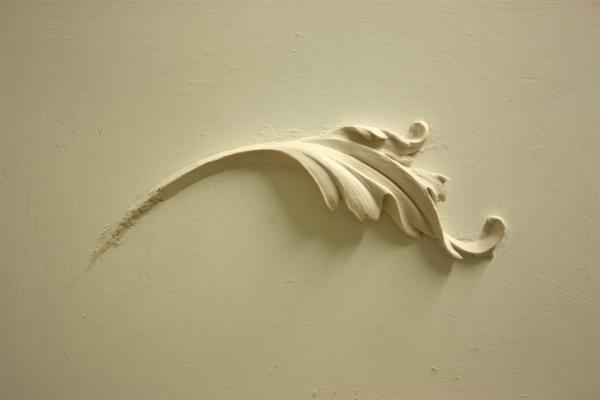 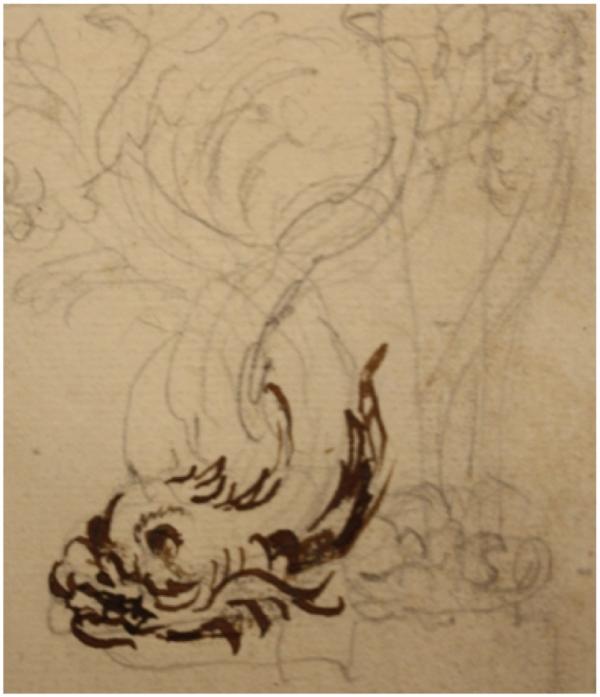 There are aspects of the stucco making process that mirror sketches, like the one at left from the Lock album. The rough core line is first worked in pencil, with the ink line decisively marking the work as set. Like sketching, stucco is a medium that captures speed and movement. What we are left with after the action is a physical record of a tacit rapidity and fluidity. There is a much older drawing for a plasterwork ceiling in the archive at Longleat house that supports this idea of drawing in 3D. The ceiling design is meticulously drawn except for the centre section, which is meant to hold the depiction of a coat of arms. Instead of a design for a crest the drawing presents a written message from the stuccadores, which reassures the viewer that although the plasterer does not have the skills to draw the design in ink, he will be able to execute this complicated centre panel admirably in plaster.

So can plasterwork be read as a three dimensional doodle? Stucco mix in its fluidity has the propensity to move like three dimensional ink, finding its form as the result of a movement.  This means that the final design of a stuccoed room was never fully known when the job was started. The general shape and composition might have been decided, but how this was to materialise across the expanse of a wall or ceiling may have been literally in the hands of the stuccadore. If this element of risk that gave the plasterwork its life.

I’m an artist, trying to learn this art form, and I am frustrated that there is so little information on the steps and technical information required to create such beautiful works of art with stucco. Where can I find the information you used to write this article? Are there books, or did you have to meet an actual master stucco sculptor? Who? Please help me.

Hi Austin,
I am restorer with a 20 years experience, and probably i can help you with your questions.
Though the article is an old, hope author found answers for his questions.
I want to add only about “a three dimensional doodle”… Yes it is “finding its form as the result of a movement” is a good description. But is more important that there is anatomy of the elements, and the rules for a movement and when you got such sketch before you work you able to read it because you know the language.

Hi i’m just wondering can stuuco be painted over by gold paints? I want to experiment with stuuco but I also want to paint over them in gold is this possible?