In design circles, the Dutch town of Eindhoven is best known for its excellent Design Academy – which has produced some of the biggest names in the field over the past decade. (Many of them were featured in the recent V&A show Telling Tales.) But on a recent visit, I discovered that Eindhoven has another big attraction – the Van Abbe Museum, a venue for modern and contemporary art that features some of the best curating I’ve seen in a long time. 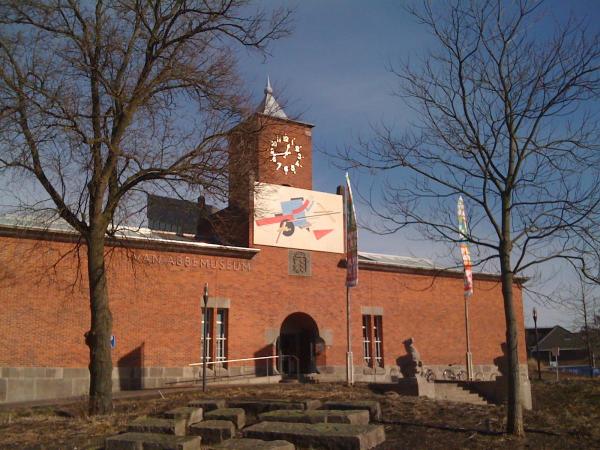 When I visited, the Van Abbe was absolutely packed with great things. There was a piece by British artist Martin Creed in the lift, which consisted of a chorus of voices singing a single chord (it went up in pitch as you ascended, down as you descended). There was a complete recreation of an exhibition from 1983, which gave you the feeling of stepping back in time. And the lobby had been completely covered in funny and incisive drawings by the Romanian artist Dan Perjovschi, who has also done his thing at MoMA and Tate Modern. 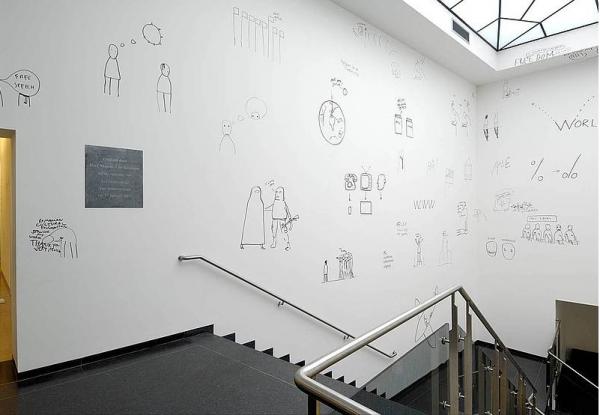 But what really caught my imagination at the Van Abbe was the museum’s use of the El Lissitzky Archive – the biggest collection of the artist’s work outside of Russia. El Lissitzky was one of the Constructivist artists who was inspired by the Revolution to make abstraction into a political art form. (Also see my previous post on this, Russian Arc.) He was also a big influence on the Bauhaus and De Stijl. Here’s a self-portrait photo collage from 1925, showing him as ‘The Constructor’: 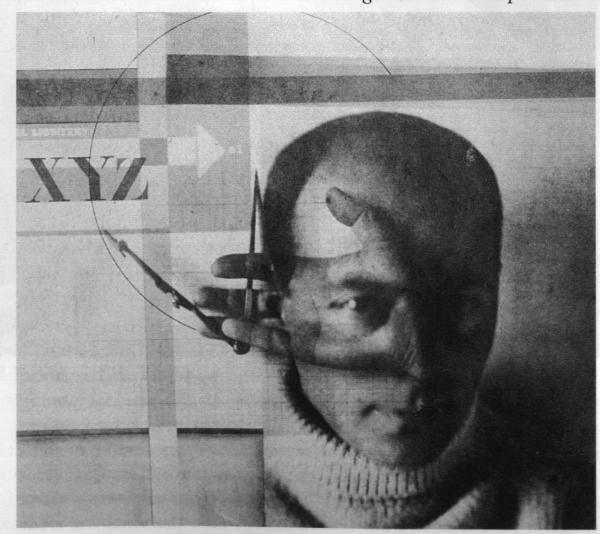 Not much of El Lissitzky’s work survives, for a number of reasons. First, he lived in tumultuous times – the Revolutionary government he supported eventually turned against the Constructivists. Second, he often worked in media that were ephemeral, such as set design. And third, and most importantly, he was a utopian. Like many modernists he constantly came up with schemes so radical they were unlikely to be built, like this amazing speaking tribune for Lenin. 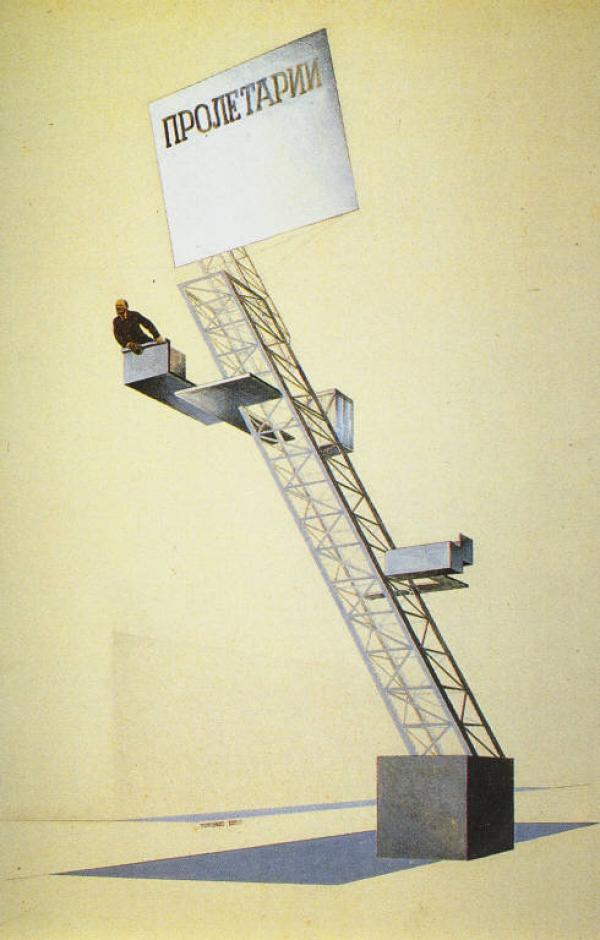 These were sketches that were never going to be real products – and the abstract, somewhat magical space of his renderings (especially his ‘Proun’ works) reflects this. But the Van Abbe Museum has decided they’re not satisfied with the unrealized drawings in their collection. They’ve put up one of Lissitzky’s slogans on the wall:

I AM NOT GOING TO DO THIS. YOU CAN DO THIS.

And they’ve taken it seriously. In some cases, like the below theatre set design, they have re-built lost examples of Lissitzky’s work, doing their best to translate his impossible shapes into real materials. 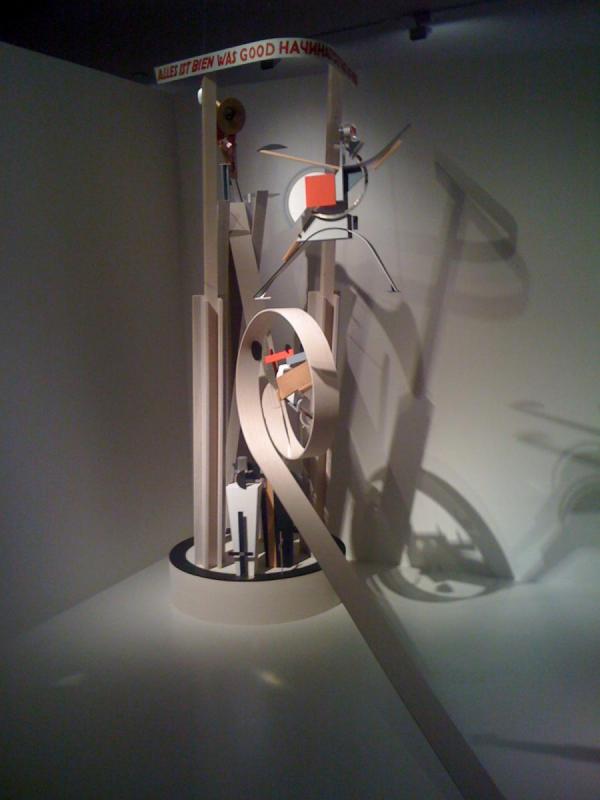 In other cases, they’ve created Lissitzkys that never existed in the first place – like these amazing, huge sculptures in the museum’s courtyard fountain, based on an El Lissitzky drawing. 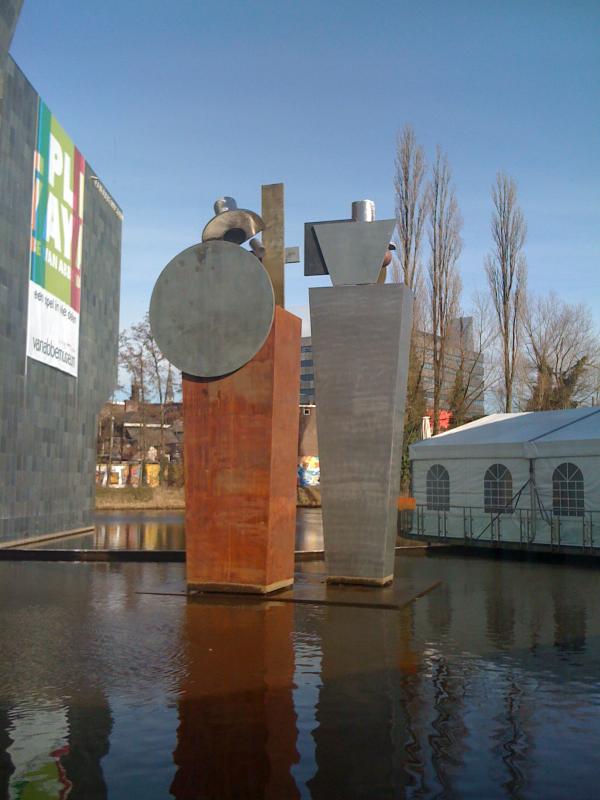 Looking at these monuments, it struck me that they were an intensification of what museums always do. We present the material traces of bygone ideas and ideals, often in a purer form than was ever possible in the past. By enacting El Lissitzky’s visionary sketches, the Van Abbe has taken design drawings more seriously than any design museum. They have made themselves into a retrospective utopia.