As I may have mentioned before, I’ve been working recently on a big exhibition about Postmodernism here at the V&A. One of the most exciting aspects of the project has been making acquisitions: finding objects for the collection that will stay long after the show has ended.

One of the objects we’re most proud to have acquired is by Fred Baier, for my money the most interesting British furnituremaker of his generation. Here he is, sitting in the ‘Prism’ chair that we have just added to the collection. 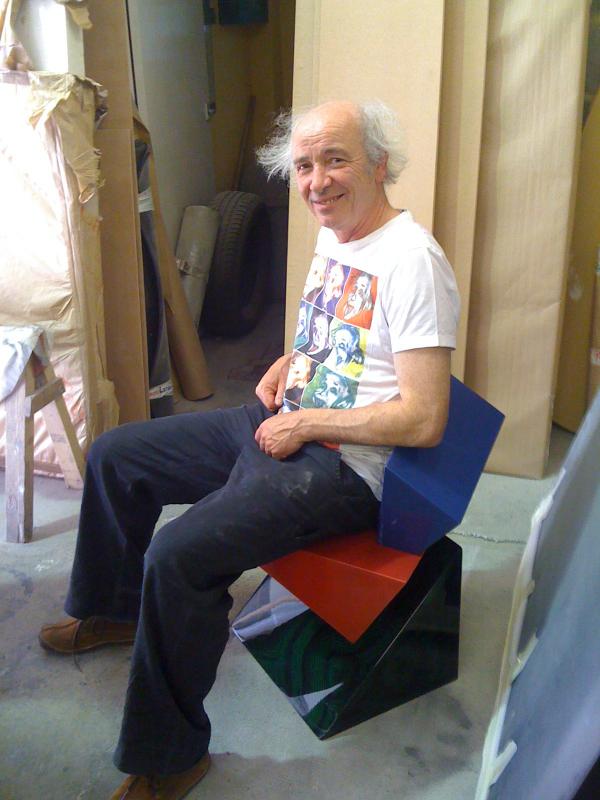 Baier doesn’t fit into categories very easily. He fashions everything himself by hand, more or less, but he is also technically innovative, and very sculptural in his approach. So you could say that he was crossing the craft/design/fine art divide back in the 1970s and 80s, before it was quite so fashionable. But the interesting thing is how he did it. When I asked him to explain the design, he said:

I said to myself, why don’t you do a chair that doesn’t look like a chair? Make it out of lumps of geometry?

This is exactly what he went on to do, creating a chair that is composed of three prismatic solids, colliding at odd angles. The chair doesn’t even look that much like furniture, partly because the MDF it’s made from is covered with high-gloss finishes (executed by Page Lacquer in Wandsworth). 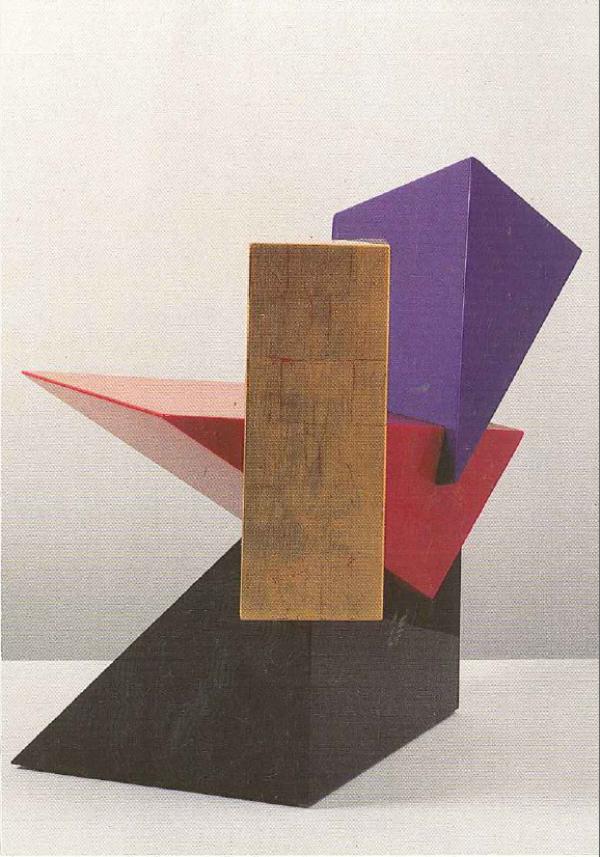 What may not be immediately obvious about the Prism chair is the  difficulty of making it. Every facet is different, because of the intersection of the forms. And all the angles have to be cut just right so it will fit together. This is where Baier’s designerly streak comes in. He turned to his friend Paul McManus, who was an early experimenter with CAD (Computer Aided Design). Together, using a 3D modelling programme called VAMP, the pair made a set of computer sketches for the chair, showing it ‘unfolded’. 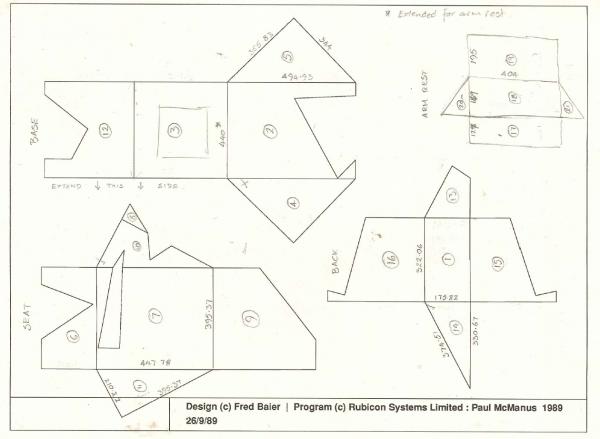 Navigating the programme wasn’t easy – as Baier puts it, ‘3D modeling involved typing gobbledygook for ages until an image finally appeared on screen.’ But it was essential so that he could cut the right shapes. It also meant that he could easily make a second chair, a mirror image of the first, simply by flipping the drawings around on the computer. 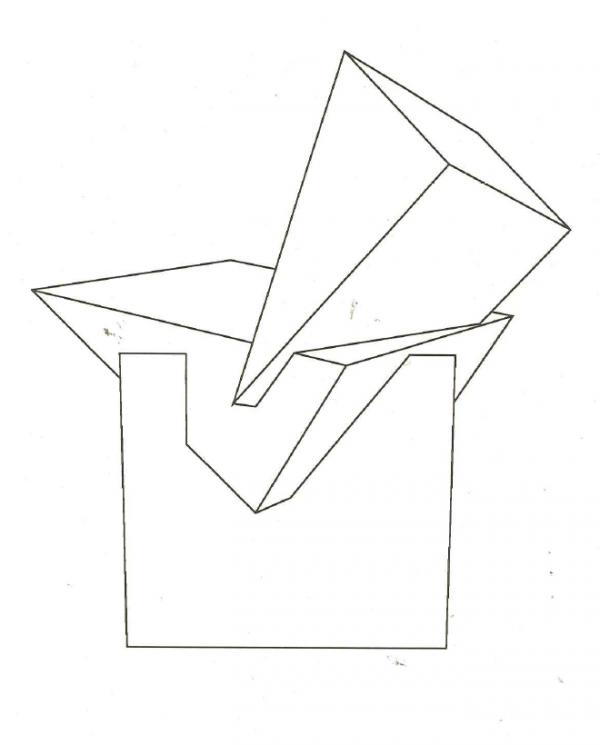 Baier’s use of digital renderings, back in 1989, makes the Prism chair one of the earliest pieces of British furniture designed on a computer. It takes a place in history next to Tom Dixon’s 1991 ‘Pylon chair,’ which I discussed in a previous blog post… 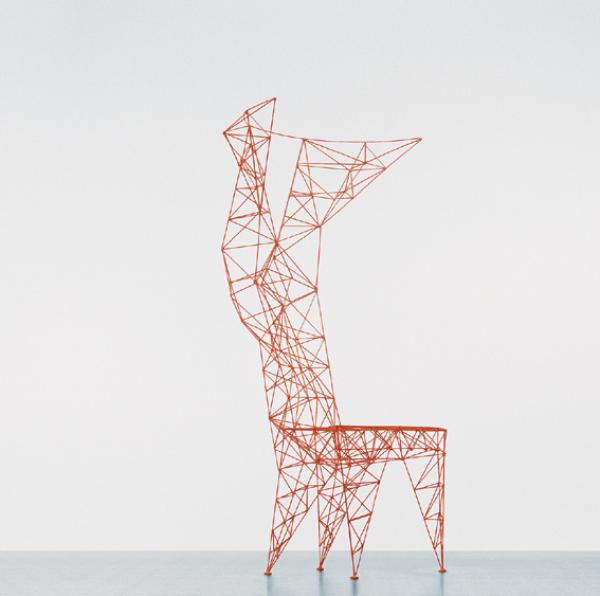 … and other interesting objects, like this ashtray made in the 1970s by Swedish designers Holger Backström and Bo Ljungberg, one of the first-ever objects made with computer-driven tooling. 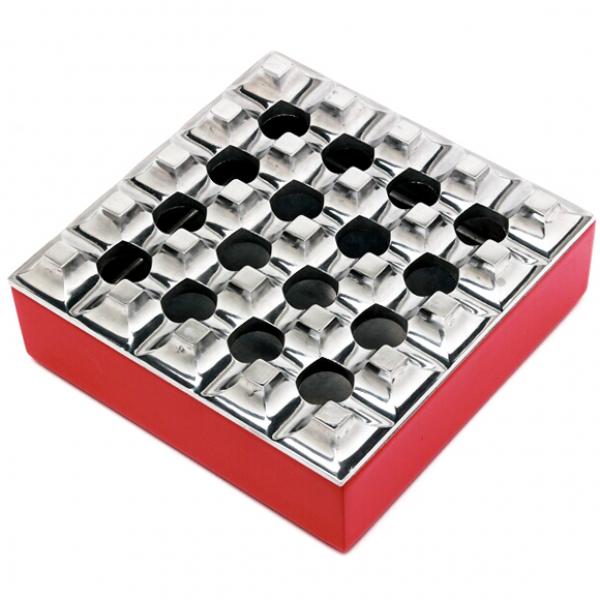 What I like about all these objects is that they don’t hide their digital origins. Even as they exploit the new possibilities of technology to realize an object, they bump up against the edges of that technology’s capabilities.

An interesting footnote to this story is Konstantin Grcic‘s ‘Chair One,’ designed in 2003. It looks a lot like Baier’s and Dixon’s chairs, but it actually started life as a cardboard model, not a digital artifact. 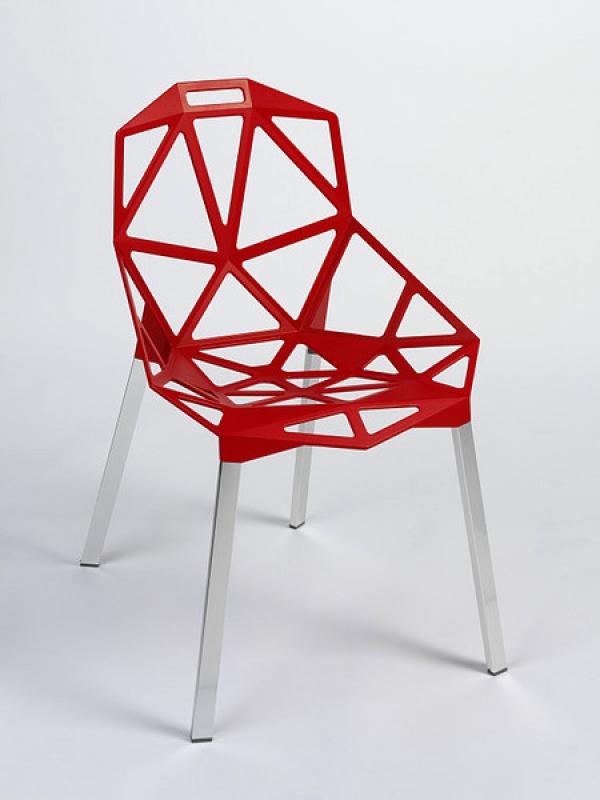 It’s almost like Grcic was trying to retain something of the immediacy of early CAD by reverting to a non-digital modelling material.

As the domain of the digital expands, it’s getting to the point where the design process imposes too little friction on the designer’s imagination. Compared to the fluid, lifelike computer-generated effects in a Hollywood movie, or the equally seamless furniture designed that rapid prototyping is making possible now, a chair like Baier’s, Dixon’s or Grcic’s may seem positively primitive. I prefer it that way – I guess I’d rather take my technology with a lump or two.