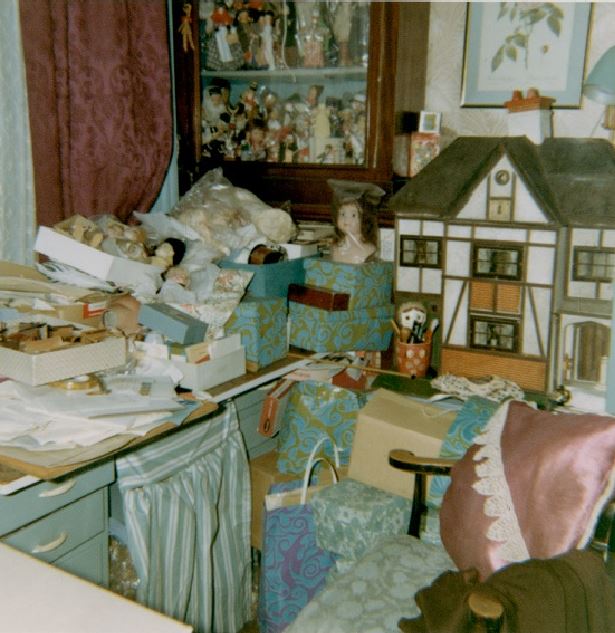 Holly and I have been struggling to find another word to replace “interesting” when describing Faith Eaton’s archive as we go along with the research and listing its contents. The truth is the deeper we dig the more interesting it becomes. And the word “interesting” stays – although we sometimes switch to “fascinating” just to not become so repetitive.

These last past two weeks we went through a couple more boxes and, surprise surprise, we found this very interesting, fascinating, curious black folder that tells a particular story.

Have you ever imagined how would it be a day in the life of a dollmaker?

Personally, I never had. But this black folder, which looks more like an old address book, enlightened us by telling this story that pictures Faith Eaton’s house and “an average day in the life of a dollmaker”.

We are not sure who wrote this diary, which is not signed or dated. At first we thought it was a diary written by Faith, but the voice in the diary tells a story from an outsider’s point of view. However, a third thought came through our minds: maybe it was Faith writing about herself and things she is passionate about, using the third person as there is so much personal information and photos included in the diary. And one last question: if someone else wrote it, how would it end up in Faith’s personal archive? Would this person be a closer friend? An admirer?

Like a tale, this mysterious writer describes not only how Faith’s house looked like back in time, but also gives us her or his impressions of that particular day.

The narrative starts with the expectations our writer had when standing in front of Faith’s house’s door:

It is the fairytale kind of door, that is imposing yet friendly, and as you gaze into its patterned glass panels, a feeling of delightful expectation comes over you.

The excitement grows quickly once the mysterious visitor is accepted inside. The house was “an ‘Aladdin’s cave’ of dolls, doll’s houses, and toys” with an intense and thrilling environment of “thousands of eyes gazing with unblinking stare”.

It was there, amongst so many dolls, dolls’ houses and toys that our visitor found Faith Eaton:

Work sent in for repair must be looked at, pieces stuck together the previous day checked over, parcels of finished items for museums packed. Telephone calls concerning exhibitions and displays fill the morning until coffee time, when a brief respite is taken, and then morning post opened. The morning mail is full of variety, commencing with a letter from a friend who is a ‘head-hunter’ which encloses a photograph of some of the ‘trophies of the chase’, in her collection. A postcard of an embroidered panel done for charity by a York doll collector. Several enquiries for doll repairs, and several photo’s and cuttings of fellow doll enthusiasts varied achievements, ranging from doll-house collecting to writing books.

This paragraph, which is richly illustrated with pictures and newspaper cuttings, seems like a description of what Holly and I have come across in the past month. All these letters, enquiries for repairs, postcards and newspapers’ cuttings were carefully kept by Faith all these years. We have lost count of how many postcards we have found so far – a thousand maybe? As well as the countless number of photographs of dolls and dolls’ houses that were taken either by Faith or sent to her by those “fellow doll enthusiasts”.

Apart from Faith’s daily duties, the diary also describes the “street”, which consists of a collection of dolls’ houses from the mid-Victorian era to the present day ready to be dusted by Faith. In addition to the description, the writer included pictures of the dolls’ houses and Faith herself.

Faith’s average day included visiting other doll makers “to see her latest models and to admire one of the most recent additions to her collection of dolls”. After a cup of tea, Faith then would return home to get ready for a photograph session – of her dolls, of course! Towards the end of the day, Faith would get back to her mail in order to reply to so many requests and read all those newspaper cuttings her friends would send to her. All of this is now part of this very interesting archive.

We would love to hear from you about this project. Send us any suggestions or questions you might have about it. If you have any information about this mysterious writer, please do get in touch!

Absorbing, captivating, fascinating, exceptional, compelling, arresting, enchanting, engrossing… like any of these? Your work is delightful.

What an interesting lady! How dedicated she was to the subject.
Mesmerizing seems also appropriated.
Keep on the good work!

Hello! I came here searching for the daily life of a Victorian dollmaker and believed this article of yours was from the same age. But, it happened to be so fascinating that I went on searching for this dollmaker woman. And here she is, she’s even at Wikipedia!: https://en.wikipedia.org/wiki/Faith_Eaton