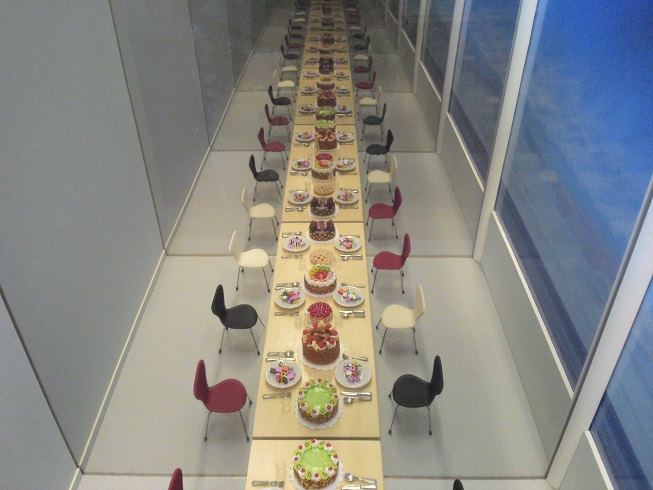 As a finale to the Small Stories exhibition, we wanted to create something new. Something that would bring the story of dolls’ houses bang up to date, and reflect on some of the themes we’ve been thinking about when we planned the show.

One key idea which came out again and again when Sarah and I researched the dolls’ houses in the Museum collection was fantasy. Dolls’ houses aren’t mirrors of reality or high-fidelity records of real houses. They take inspiration from life and run with it – creating idealised rooms, imaginary characters and whimsical settings.

Look at Betty Pinney’s house – a perfect example of how a creative woman used an old dolls’ house to construct a story of an Edwardian family of the empire, complete with pigeon-chested butler.

Or the Kaleidoscope House – an architect’s fantasy of a completely transparent house, with moving walls all round.

And the Tate House, whose history has never been well known. In its place, all kinds of fantasies have been projected into its interiors, by curators and visitors alike.

Wouldn’t it be wonderful to have a house constructed of many different fantasy rooms – all from different points of view, made by interesting and talented people? So we started to build the Dream House.

The designer of the exhibition, Andrew Gibbs from Public Works Office, came up with a plywood modular structure, which could come apart for each artist and designer to make their room, and then slot seamlessly back together again. In the meantime, we started contacting designers, gathering an amazing group of twenty. Everyone was keen and full of ideas. They are from backgrounds as diverse as greetings cards to jumbo jets, tables to trains.

Soon, the empty boxes arrived. They were beautiful, but we couldn’t hang on to them as I had to get them out to the designers as soon as possible so they could get making. They spread out on buses, by courier, and one even left in a capacious bike basket.

At the end of September, they started coming back.

One after the next was astonishing. Every designer has inhabited that little space, and found a way to make the box seem different, in scale, atmosphere, function. Some are perfect miniature rooms, furnished in precise scale, that you feel you could walk into (if only!). Others are conceptual, playing with the idea of a room and stretching the boundaries of the box. Some are other-worldly, spinning the idea sideways to give a disarming take on a domestic interior, or playing out ideas impossible in full-scale.

Every single one has been personal, brilliant, and a Dream House come true! I can’t wait to put it all together and see the house come alive.

Every artist and designer will get a profile on the website by the time the exhibition opens in December, so check back for more.