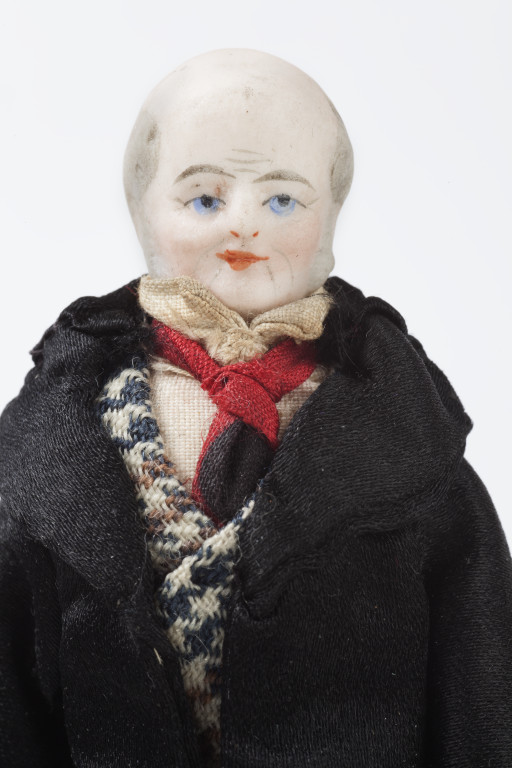 This is George Humble, one of the inhabitants of the Box Back Terrace house. In the Small Stories exhibition, you’ll be able to meet George and the other tenants of Mrs Reynolds’s small but neat South London lodging house.

The year is 1900. George Humble has been a tenant of Mrs Reynolds for twelve years. He never married, and now lives a life of quiet yet unconventional domesticity in his single room. He is a man of routine and careful order.

Four mornings a week, George goes to work at a legal firm in the city. He climbs aboard the busy buses and rides through London.

“the intensification of emotional life due to the swift and continuous shift of internal and external stimuli… the rapid telescoping of changing images” Georg Simmel, The Metropolis and Mental Life, 1903

As a child, George was taken to the Great Exhibition in Hyde Park. He can remember the thrill of the towering glass building, the tremendous noise inside from the chugging machines and chattering people. He pushed close against his mother’s skirts for fear of getting swallowed by the crowd.

But the marvels he saw then, nearly fifty years ago, seem commonplace today at the dawn of the 20th century! Electric lights in all the streets and dazzling in the restaurants, flushing public toilets on every corner. It’s as though every day in London is a Great Exhibition – but George no longer has his mother’s skirts to protect him.

“He is reduced to a negligible quantity. He becomes a simple single cog as over against the vast overwhelming organisation of things and forces.” Simmel

George’s protection now, in middle age, is the reliable landlady Mrs Reynolds. In return for rent every Friday, Mrs Reynolds provides meals six days a week and maintains a respectable, quiet house. Without this secure home, George would be at the mercy of the city.

Turning away from the crowds, into his room and into his mind, George finds refuge and freedom in his study of ancient languages. Outside, the metropolis is pre-occupied by the efficient production of saleable goods, driven by a profusion of pocket-watches.

You may not even notice George if you passed him in the street, but he has made a creative and fulfilling home behind the identical façade of this little house.