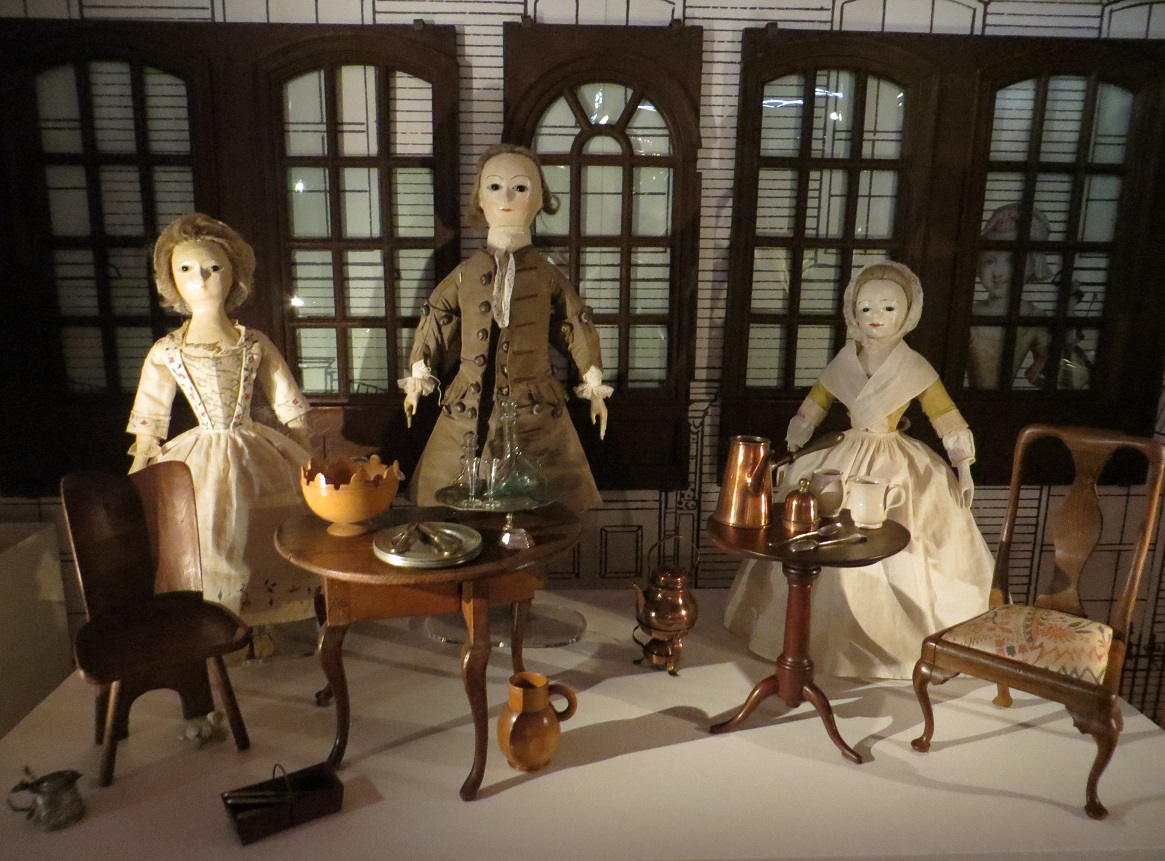 One of the most exciting parts of redisplaying the dolls’ house gallery has been reviving the so-called ‘18th century room setting’.

This intriguing group of furniture, cutlery and kitchenware, wooden panels and dolls has been around since 1877, when it was bought for £20 from a Staffordshire woman called Mrs Thornhill. There are many treasures – brass knives with pistol-shaped handles, a delicate green glass funnel and carafes with minute stoppers, a sturdy silver tankard and many silver plates. Kitchen, dining room and scullery items combine with a chest of drawers and bedroom textiles – giving the impression of a house in disarray, a curious collage of contents.

Over the last year, we have developed a new display for these lovely old things to show them off better than ever before. As well as incorporating previously disparate objects, it has also involved people from across the V&A.

First, curator Sarah Wood and I went through the catalogue records and checked we could find everything. The furniture is bigger than dolls’ house scale, so some of it had been put with the dolls round the other side of the building. Furniture conservators visited to assess the condition of the oak panels and agreed to do some cleaning and mending work. As always, we photographed everything with its number and packed it carefully for the journey from Bethnal Green to South Kensington. On the way, we discovered that this dressing mirror had been made or mended with a cigar box (and was probably not 18th century!)

While it was being worked on, we were contacted by Patricia Ferguson, who was then researching the Uppark dolls’ house owned by the National Trust. Patricia also works in the Ceramics department at the V&A, and had seen a picture of an alabaster tea service which led her to our ‘room setting’. Our team had a new expert member!

Then collections assistant Sophie Sage and I went to meet the dolls. Their 18th century clothes and textiles (including towels, pillow cases, spare shoes and bodices) are so detailed and complete, that they are kept with the V&A costume collection at the new Clothworkers Centre at Blyth House. With Susan North, curator of costume, we chose three out of the nine dolls to include in our display. Since long exposure to light can be harmful, we chose dolls in robust condition, leaving the most sensitive ones in their comfy boxes at Blyth (where they can be visited by appointment). We delivered the dolls to the textiles conservation team to work their patient magic.

Meanwhile, Patricia had been through the 300+ pieces of glass, silver, copper and ceramics to identify what we had and give some dates when things were made. She identified many items that were definitely from the 1700s, and explained what some of the more esoteric objects were. A wooden bowl with an indented rim known as a monteith was used to chill wine glasses.

We started to think about the wood and glass panels which made up the frame. They had a plain side (with window putty) and a carved side, with architectural details known as ‘aprons’ under each window.

By this time, Karen Jensen (dolls’ house conservator extraordinaire) had finished cleaning and consolidating the panels. We went to South Kensington to examine them more closely. It turned out that many of the panels had original hinges on one side, and one had a keyhole and lock mechanism. If we laid them out so the carved architecture details were at the front, there were two symmetrical pairs. The narrow panels, one with a semi-circular arched window, had hinges on the same side, suggesting a vertical arrangement. Gradually shifting the pieces around, the front of a large dolls’ house came into view.

We will never know exactly how the panels fitted together, but following the placement of these original fixings gives us strong clues. If this was the front of a Baby House (the name for early architectural-form dolls’ houses), it would have been of impressive scale. Patricia has since found that Mrs Thornhill herself called it a doll’s house.

To give the sense of the dolls’ house being a fragment of a larger whole, we developed a design for a collaged background panel. An architectural drawing from the Survey of London and painted portraits from the V&A collection came together to give the idea of a house with inhabitants, but dislocated and provisional. Designers Public Works Office turned a rough proposal into a beautiful wall graphic.

Over the last few months, the display came together. Museum of Childhood technician Mick Harty built a wall in the display case, and the graphic panels were put in place. Mounts specialist Matthew Rose installed the bespoke brackets to hold the wooden doors, and made acrylic and wire stands for the dolls.

Choosing the furniture, we were inspired by a 1720 painting by Joseph Van Aken entitled ‘Saying Grace’. In the painting, a respectable family sit at a round table laid with pewter plates, knives and forks. A large tankard sits on the floor by their feet, near the family pet. We’ve also included another table laid with a capuchin drinking cup and a copper chocolate pot with wooden handle. A large pear wood jug sits on the floor. Collections assistant Lauren Vonbechmann, Patricia and I placed the furniture in the display case. A group of curious children watched on from behind barriers.

When the dolls arrived back at Bethnal Green, they were gently steamed to take the travelling creases out of their clothes. Conservator Christina Ritschel shaped the colourful quilted petticoats and arranged their bonnets and shawls, before lifting the two ladies and a gentleman carefully onto the plinth. Now, the whole display has come together and looks wonderful in our gallery. Few visitors would guess how many people contributed research and skill into our new display – but they can enjoy the result: our Early Georgian Baby House.

I’m pretty into doll house furniture. These antique doll houses makes me wanna go buy a whole set of doll houses. Though I don’t have budget. But still, this is a great article. From researching, reading, I’ve found many online shops that sells doll houses. One I handpicked is this: http://shop.sueryder.org/doll-house-furniture.html … They’re a charity too. Got to give more for charities.

Thank you for walking us through your process! Fascinating for anyone who is interested in any aspect of 18th century children, toys, dolls, furniture, etc. I made a Bangwell Putt doll with wardrobe, and next will be an English wooden.
Thanks again!